I have a certain ritual I like to go through the day before the race. Saturday was not that kind of day.

In fact, Friday wasn't either. I had just spent two very long days helping cover a political event, and ended up the night before Around the Bay at the hotel, in my room, checking in on work, in an utter state of exhaustion. On the bright side, I had not run since Wednesday.

So that was me at the start corral for the 30K race. Tired, lacking in energy, unsure what I was in for, in alien territory. My strategy going into this weekend was to use it as a training run but I know that a race is a race. Problem was, I had no indicator on what I was capable of, having a lower than usual mileage this marathon training season. My paces had been relatively laid back, and my half marathon a week earlier in 1:41 was the only sign my body would be able to do more than an easy distance runs .

I've done pretty well in the 30K distance -- this time, I was thinking 2:30, which would get me going in on 5 minute kilometres. If this were last year or a few years ago,  I wouldn't miss a beat at aiming for that time. A 2:30 would put me in good state of mind for planning a 3:30 or faster marathon.

We hit the first part of the race at a what I thought was a slow start. In retrospect, it was good to hold back. More than 12 hours earlier, my co-workers were surprised I was going to race after a marathon of work, and in fact when we started the race all of them were probably in bed fast asleep. Man, I wanted to be nowhere near the roads.

So holding the 5 minute kilometre/8 minute mile pace felt harder than it should. I could feel each step in my bones.

Oh, did I mention it was perfect weather? Shorts and T-shirt for an Around the Bay, that's a new one.

Within a few miles, I had convinced by body that I going for the long haul, and slowly it turned the corner. The cardio came back, the stride lengthened, the pace was starting to lock into place. Trailing the 2:30 pacer after letting him get away, I felt almost great. The 10K mark came with the relay station, and I had no envy for the relay runners. A good sign.

I hit the 10K mark in less than 50 minutes. Perfect pace.

By this point, I felt that the pace bunny was running at a comfortable pace, but my natural comfortable pace was faster. So I stepped it up, and made my way through the flat course, north. That is, until my stomach told me I needed break, which I took at mile 10 (you can see the splits below). That killed about a minute of time that I had to make up.

I hit Burlington feeling curious on how I'd handle the hills. Ran into Dave who was treating it as a progressively faster run. A few weeks ago, I did the course so I had some muscle memory of the incline. Luckily, the race setting put a competitive fire in me, and helped those long slow climbs go by fast. Racing, I've learned, lets you leverage those around you -- suck in the energy of others, stick behind runners who look like they've got energy, and tolerate a few minutes of pain until your body just gives in.

And yes, I survived Valley Inn Road and its steep climbs. Well before that point, I had stepped up the pace to a lot faster than 5 minute kilometres and after I crested the final hill, despite the pain, in spite of the exhaustion my mind was feeling, I tapped into my reserves. My legs were feeling fine, and they wanted to go fast. So I brought it home.

My best ATB's have been run with the last 10K as my fastest. This edition was my slowest, but given the year, and my condition, I'm still a little shocked I was able to pull it off. This one, I'll place into the books as one that experience (almost 80 road races, nine 30K races) give me what I needed to survive.
Negative split, I'll take that. And now I have a little more than hope to build upon my next goal marathon. 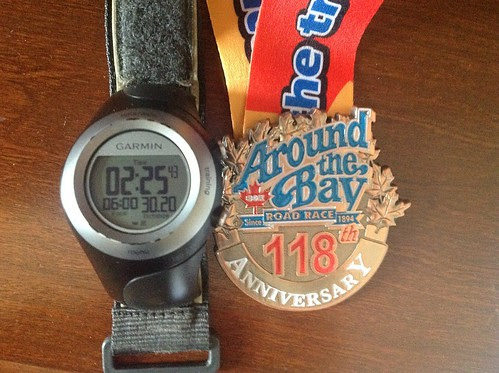 Congrats on the result. It is impressive you pulled it off after covering the conventin for two days.

Impressive result especially with all the work leading up to it.