I guess when you run enough races, you eventually get to see everything. Today when the starting gun went off at 8 a.m. I was nowhere near the start. I found myself in another type of holding pen: Inside a Metro station a kilometer from the start. Here's what it looked like as we were climbing up the escalator. Pretty insane.


I guess I should've known. This was the first year that the rock 'n roll series have come to DC to take over the SunTrust Marathon and half marathon. A victim to corporate naming rights, the half marathon I ran was actually called the CareFirst, BlueCross, Blueshield Roll 'n' Roll USA 1/2 Marathon. Wow, that's a mouthful.

Actually, I should've known from looking at expo yesterday was that a hell of a lot of people have signed up for this race.

Still this morning, I decided to leave more than enough time to get to race, the same time I put aside to get to the Pentagon for the MCM the past five years - or so I thought. We waited for 20 minutes at one station on the Red line, by which time our subway was packed tight with runners. They couldn't close the doors, so they kicked us all out and we basically ate 40 minutes on trains and subway stations.

That's a first, starting the race on a subway platform. I just resigned myself to a different kind of race. "It's a training run," I thought as I waited and line and chatted up other runners as we waited for the portapotty. We complained about the wait, but we were pretty chill about it -- at least none of us were using it as a goal race but i'm sure others were.

From the back of the corrals (there were 27), I finally did some maneuvering to make it pass the start line 26 minutes after 8. I'm not sure how fast the runners were at my start, but I did spot the 2:45 pace group. Wow, I had a lot of work to do.

Going into the race, my strategy was to pace for 5 minute kilometres or 8 minute miles for a 1:45. It was an even pace and a good one to see how it'd feel -- I haven't really done much pace work at all this year. I've been a pace bunny for two half marathons for 1:45 so in theory this was a piece of cake. Right.

So, given that I started way back, I spent the entire race doing the following
It's not ideal finding a consistent pace when you're spending the race pacing increasingly faster runners. From the first 5 miles, I was going significantly faster, then as I caught up to runners at the front, it became harder to figure out how fast I was going.

The course has a good stretch from mile four to eight of gradual uphills, with some bigger ones around mile 6-7. Still, I gradually increased the pace. Once we hit the high point, I remembered how I attacked this course a few years ago after the 9 mile mark. Although I was still weaving through crowds, I felt great and started to hammer it. A few other runners were doing the same.

I hit the home stretch going at tempo pace, which pretty much emptied the tank but it felt great to ramp it up. I hit the end in 1:41:36 -- considering the circumstances, I'm really happy with the time.
According to my finish page, I was the 909th half marathoner of 16291.

Next week, Around the Bay 30K! 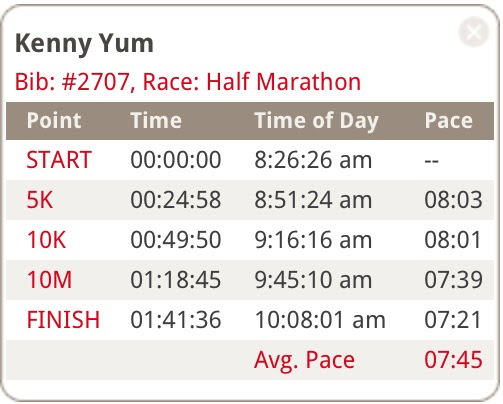 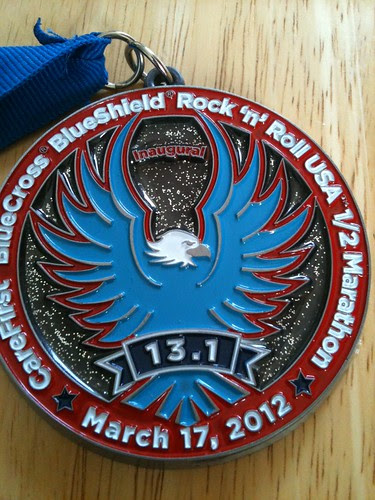 Congratulations!!!! Good luck in next weeks race! I wanted to do it this year but logistics did not allow.

Oh boy, that is one crazy start! I've never seen anything like that. Glad you were able to make your way through the crowds and eventually find your pace. Sweet negative split and awesome run!!