I was looking to lock it down -- the calendar was set -- and commit to another summer of training for marathon season. It's looking like it's going to be a lot of work to get back to where I was a few years ago, but I'm looking forward to it. In any case, the plan was Chicago Marathon on Thanksgiving weekend as the goal race, then follow it up with Scotiabank a week later as a fun run, then maybe do my seventh MCM two weeks later.

Um, yeah.. about those plans. They've been interrupted in the best possible way, a detour that will take me through five boroughs of the Big Apple in November, the 2013 New York City Marathon! 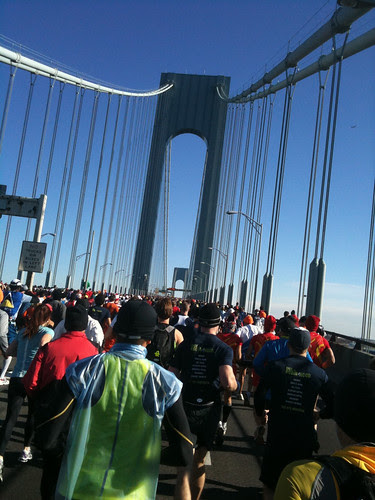 In 2010, I took a massive victory lap after getting my BQ, running five marathons mostly for fun, including my first Boston Marathon. That fall, I capped it off with three marathons in four weeks, ending with a memorable New York City Marathon.

The experience was so amazing that soon after I ran the NYC Marathon, I found myself filling out the application, reentering the lottery. I knew the odds were not in my favour but I figured why not keep on trying. The race was phasing out the "three strikes and you're in" rule, but I had luckily snuck in. So I didn't get in in 2011, or last year, so I figured this year I'd get my third strike for a 2014 NYC.

Maybe my lucky charm was tweeting at race director Mary Wittenberg this past Wednesday right before they held the lottery, where they would select 4,500 out of 33,000 applications, or a pretty good 14 per cent chance.

I have the option to defer to 2014, but with last year's cancelled NYC Marathon after Sandy, and this year's events in Boston, I felt there was no other place I'd rather be in November than to run those streets with 48,000 other runners, millions at the sidelines. Hell yes I'm going this year. For the record, I'm now two for five in the lottery -- so those of you who don't enter thinking it's impossible, you should! 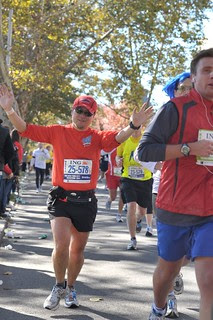 So now what? Well, Scotiabank is in real doubt, I'm thinking of volunteering if I don't decide to switch to the half marathon. And unless I want to go into NYC doing a back to back marathon (as I did in 2010), MCM is also in doubt. It'd be a shame not to do MCM, as I have a six-year streak there, but I think I'd rather run NYC fresh -- maybe even use it as a goal race if the weather doesn't co-operate in Chicago.

Whatever the course, I'm starting the training on June 10. I'm going with my old standby Pfitzinger-Douglas Advanced Marathoning 18 week, 55 mile peak, with some extra mileage in places (see calendar below). It'll be my first time really returning to it since the summer of 2009.

Since I'm revisiting the Pfitz program, I'll be posting on how I plan to attack it and what goals I'm actually making for the fall.

In the meantime, gotta get those vagabond shoes ready.

I think you should switch to a half at STWM and pace Speedy Sammy and I to a 1:45 or better half. Just throwing it out there. As a possibility.

Good luck indeed Kenny! I wanted to do New York for the same reasons you stated! I didn't get in this year, but some day.

You have a very ambitious training schedule, but you're a machine and I'm sure you'll make us all proud again!

Thanks guys! Nicole, an interesting proposition -- i'm sure there will be a 1:45 though.

Kenny, I'm sure there will be a 1:45 pacer as well, however my proposal was to have you be our PERSONAL pacer! LOL. We know that you're consistent and awesome; we have no idea about the random pacer STWM has decided on