Fitness as a priority

In the past month, I took a day off running and exercise, a streak that if I had my way would have been 31 days long. It only took a very rare weather event to get in my way:

I've hit a stride in my running this summer, and I feel like major gains have been had, even though I have 11 weeks left in training before Chicago. The long road ahead has plenty of tough runs in store, tempos, trackwork and a schedule that requires me to work out consistently. Despite that one day layoff, I'm now on a 22-day stretch -- and I'm not feeling the aches and pains that people who stress rest. Rest, for me, is an easy five-mile run.

This come sto mind as I was reading a piece at HuffPost that listed eight habits that "insanely fit" people adhere to.

One particular section, on making fitness a priority, sums things up nicely:

We're all busy, but if you want to be fit you have to make time to work for it. The most fit people strike a balance between work and family obligations, social lives and exercise. In fact, it may be what differentiates the fittest folks from everyone else, boxing champ Laila Ali told Ebony:

I do my best to work out five days a week. There are times when I can only get in three days a week because I am traveling or just need rest due to a hectic schedule. But working out is always a priority and if I fall off due to my schedule, it is not long before I get back on track. People who are fit are the same as anyone else. The only difference is their level of commitment. If looking good and being fit was easy, everyone would do it! Most people don't want to put in the work or make the sacrifices needed in order to be fit.


Looking back at July, the mileage is astounding compared with 2012. I logged 260 miles, or around 418 kilometres, in the past month. In committing to run for 30 of 31 days, it meant early mornings, including weekends. On a few days I fit in two runs, one in the morning, the second after work. Last summer was pretty low intensity but I've doubled this July mileage this year. (My record was 300 miles done in August, 2008 when I was on a 70 mile a week plan.) 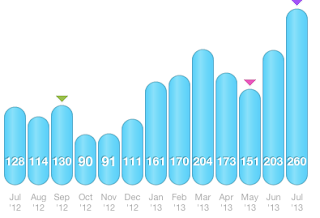 Two hundred and sixty miles later, and all of a sudden, I'm close to the form I had in 2009. Making running and fitness a priority meant that even on a recent work trip to London, I found ways to fit in runs, including a 21.1K tour of the city. Then the day I flew back to Toronto, I ran twice -- once to Regent's Park in the early hours, then a jaunt through my hometown waterfront course after I spent eight hours on a plane. An epic double.


As a result, my tempo runs have been successful, long runs are now being done at paces I didn't think I could pull of that at this stage and my form is what I knew I could get back to.

Nice to see the return from all the work - that commitment - pay dividends.
Posted by yumke at 10:18 PM

Your training is going great, I can't believe it's 11 weeks until Chicago! I'm excited. Happy training.

Just amazing, Kenny! I'm with you on the work. I've not run so much but am finding that I NEED to go to yoga on those off days. I don't like pure off days really... Good luck for the next 11 weeks.

Oh yes, the only way to really be fit (and stay fit) is to be committed. Day in, day out.