Racing shorter distances while training for marathons isn't ideal, but they are among the best workouts you can fit into your program. Tired legs, pounded by volume with little recovery, are asked to be recruited for a strong effort. But strong training can give you surprising results. I once ran a sub-20 5K a day after pounding out a 30K run.

I put off a 5 mile tempo run earlier this week (did 5K instead) so I could put effort into today's 8K. Two days ago, I did my marathon pace run for a full 16 miles, and on top of that, put in 46 miles in the past six days. Tired legs indeed.

Before I headed out to meet my buddy Lee to get to today's 8K, I punched in a few calculations into my race calculator and was optimistic. Would today's race prove all the gains I've made in the past two months? It should, as it was really another tempo run.

Most of the 8K races I've done come early in the race season. This one, in July, comes as I am amping up the mileage and - this year - fitting in a lot of quality runs. My last 8K in April was a horrid affair, my body just not ready for true racing. In my head, using this race as a tempo run, I could target a 35 minute 8K, or 4:22 kilometres, which is around what I'm doing for tempos. I did check what 34 minutes needed (4:15 kilometres) and kept that number rattling in my head.

This was my second time doing Dawn at the Don which is run by the organizers of the old Night Crawler 5 miler. It's set in Wilket Creek Park and features a basic out and back. The course is curvy with four uphills (and downhills) with a hairpin turn and tight corners so is a little more technical. The 8K had 200 runners and quite a quality field showed up.

Lee and I did a 4K warmup, the first few kilometres of the course, to get a sense of the course, it was warming but not as bad as it can be for the summer.

Seeded myself appropriately and we were off.

1K: 4:12
Tried to keep things under control, we were sucked into the vortex that is a race start, I cooled it off after seeing my watch signal a sub 4 kilometre pace. Really focused on being comfortable, getting my stride in check and being mindful not to race too hard.


2K: 4:20
The field was immediately spread so I could focus on who was around me. I tried not to get lazy in this stretch (and let the pace fall to 4:25 and slower). Relaxed was the operative word, and trying to keep cool. I had a small cluster of runners behind and beside me.

3k: 4:20
Not many water stations, I barely got any Gatorade (when it was advertised as water), but oh well. This part of the course has a sharp incline and what used to have a rickety bridge -- now paved with metal framing. Really tried to power through it, and on the downhill portion really kept the pace up so not to slow down too much.

4k: 4:14
To the out portion, there was another downhill, then you could see the leaders come back. This helped embolden me. I also passed a few runners in this stretch, the hunt was on!

5k: 4:12
After turning, I did a quick cardio check and all was a go. My tempo training the past month is really paying off here, as this is what I'm typically putting myself through mid-week. Saw that I hit the 5K mark in 21:18, knew that I had plenty of gas left.

6k: 4:18
If there was a portion that I wanted to make sure didn't get me in, it was that bridge we tackled in kilometre three. So I powered this one really aggressive -- so much so that I caught up with a gang of three other runners. Passed most of them on the downhill slope.

7K: 4:12
We merged with the 5K runners, which put me in passing mode. 2K didn't seem that far and I knew that I had to suffer a bit more. I wasn't overheating (though I was HOT). Targetted a runner in front of me who was going strong. As we hit the 7K mark, I looked at my watch and figured if I had a really strong last kilometre, I could be mighty close to the 34 minute mark (or that 4:15 average). Hammered it home as fluid as I could, passing the runner and saw the clock just turning past 34 minutes.

Yay, a 4 minute kilometre to end up a progression tempo run. My legs were feeling good -- not a lot of soreness other than what I was feeling from the past six days of running.

Finished 24th overall and 3rd in my age group.

I'm really pleased with the time and effort, a full three plus minutes faster than my April time. Three seconds of my 2008 PB and exactly where I want to be, better than expected. The comeback year continues. I may have to reexamine my marathon goals. Dawn at the Don is a great race -- I love the smaller races, really friendly vibe, and who can beat watermelon slices at the end. 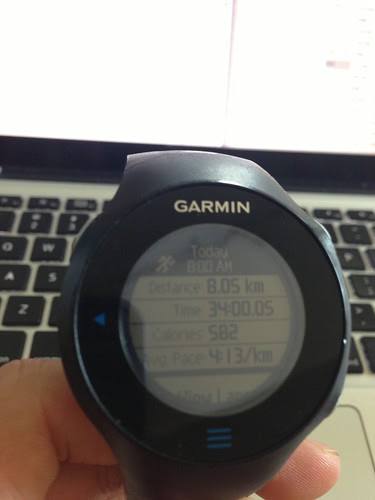 Congrats on a well run race and placement. Looks like your plans are coming together!

Congrats on a great race/result and the AG placement! I like racining in marathon training as I'm not big on speedwork in training, a good way to get in the speed.

Thanks guys! Yeah, I'd rather have more races in my schedule this summer, makes training a lot easier.

Unknown said...
This comment has been removed by a blog administrator.
7:14 AM