Today another running streak was broken, but at least I set a new record. For the past six years, I've run the Marine Corps Marathon. If there is a 'hometown' race, that would be it. Anyways, today is MCM day, but it didn't happen for me -- I wasn't interested in doing MCM then NYC a week later.

With a week to NYC Marathon, I knew I had to get in 10 miles. A 15K race was on the Toronto race schedule, so I signed up more than a month ago, not knowing what exactly I'd be doing.

Of course, the target this fall was the Chicago Marathon two weeks ago. I emerged from the race in pretty good condition, and last week ran Sam and Nicole in for the half at 1:45. The longer term injuries I'd been dealing with since early August have been fading away with the rolling, stretching and fewer miles.

How fast did I want to do the 15K race? I was telling my friend Jen -- who is also doing NYC -- to go out slower the week out, but I knew I wanted to see what I was capable of. 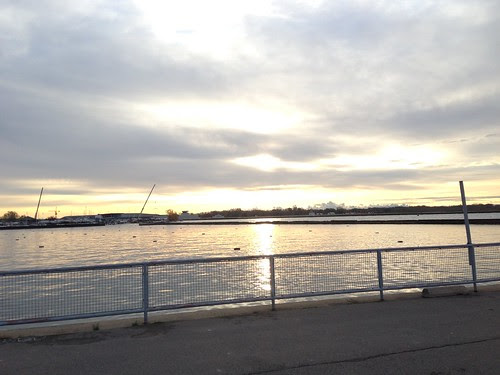 Was a chilly but gorgeous morning -- hovering around 5C, feeling a little cooler. Yesterday, I had done a 5K run and forgot my gloves. I was left chilled, so today, it was shorts, longsleeve with a light singlet underneath, plus gloves.

The race starts just half a kilometre away from my townhouse, so did a little warmup -- picked up my chip and we were ready to go.

Our course was three 5K loops and it was on my home course, the trail I've run 200+ days a year over the past decade. 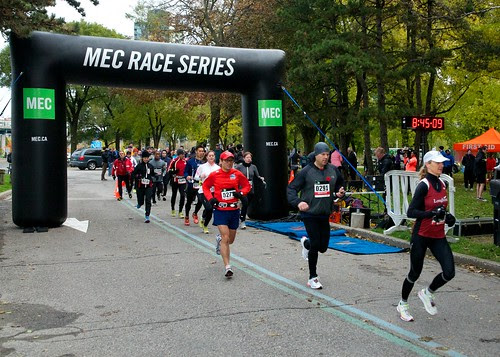 We were off, and I was just going by feel. My first inclination was go out at marathon pace, but I found myself in the top 6, and my cardio was feeling good, no aches and I was feeling comfortable. So I just let the course dictate my pace and my effort to tell me whether to slow up or stay the same. As it turns out, I was ready to race today.

After the first kilometre, two guys passed me (they stayed ahead) and there was the female leader who was slightly ahead of me. She had her own personal pacer who would do about a mile with her on each out and back.

On the way back, finishing the first loop, we could see the 10K racers starting. They started 15 minutes after us. Back to the finish and I was at this point behind the female lead.

Loop 2
Finishing the 1 loop, went back to work out on the second. The field was pretty spread but it was me and the female lead. I caught up to her around the 7K mark, and her breathing was more laboured than mine. We caught up to her pacer and he didn't realize he was pacing both of us, as he was increasing his pace. This annoyed me a little, so I pushed the pace to get ahead of the two of them.

In a weird way, this was the perfect thing to happen, as I was speeding up. At this point, I was starting to catch up to some of the 10K runners, which meant I wasn't really getting a proper feel for my pace. Oh well, might as well go faster.

Loop 3
Back to the start line for the final loop, I was starting to lap 10K runners. I tried not to think about how fast I was going, but more focusing on pace management and seeing where my cardio was. I was feeling good.

Oohrah, I thought on the third lap, thinking about where I would have been at the Marine Corps. I thought of the marines, the toughness and the marathon distance, and the 5K loop felt small. Home course, right? Right on.

I was passing other runners doing the 10K and feeling great. The weather was spot on -- cool, much easier racing conditions. I had remembered passing the 8K mark at 35 minutes and I knew that if I hammered it home I'd have a very strong race. Going into today, I thought maybe I'd do pace work for 10K then end at tempo. I started faster than pace so I thought "might as well hammer it home"

Seeing that, passing other runners, and feeling like I wasn't even close to red lining, I just kept on going a 4 minute 14th K. I realized I had done 14K in one hour. Wow. And when I saw that, all I could think was, hells ya, lets go faster. 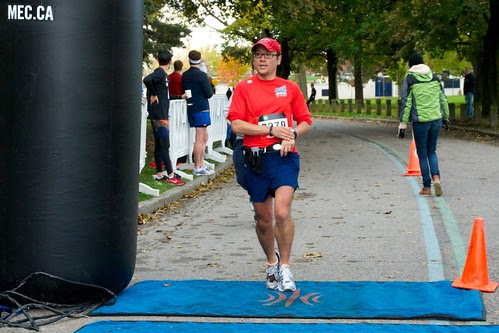 That felt great. I finished the race in 1:04 flat (though still waiting for chip time). I worked hard but I wasn't spent. Forgot to hit the stop on my watch. A PB by more than 2 minutes and a pace of 6:49 miles or 4:16K.

This is the type of run I needed as I plan ahead. What I will do next week at NYC is an open question. I'm not sure, to be honest, but at least I know I have plenty of oohrah to bring into 2014. 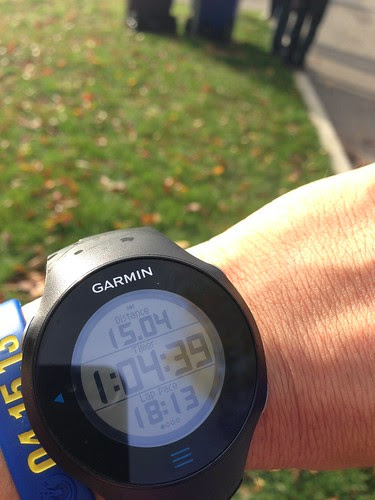 3:54?! Holy crap. Amazing job out there! Maybe you need to get annoyed by other runners more often. ;o)

Fantastic race Kenny! You're a machine! Have fun in NY and enjoy this amazing fall season!

Congratulatons, nicely done! Have a great time in NY!