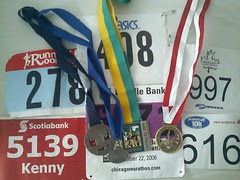 media1.jpeg
Originally uploaded by yumkerun.
I've pretty much faithfully plotted out all the miles and kilometres I've run this year. What kind of year was it?

In my racing life, it was the big one. I ran in seven, and I could easily have done more. I set a few PRs, but none of them to go on about. All those runs are overshadowed by The Marathon. Chicago was a far off goal, then one looming, then one realized. This blog tracked me before, during and after that big event. I want to do another, because I became stronger because of the training, because the intense schedule gave structure to my workouts and because the achievement, both mentally and physically, are totally mine to savour.

I'll leave declaration of resolutions for another day, but it's safe to say that I've achieved most of mine from last year in 2006.

Congrats on an oustanding year. 2007 will be even better. You've gained experience and confidence from this year to achieve your '07 goals. Happy new year!

Bonne Année!!! 1500+ miles of running! You're definitely a machine! Congrats and cheers to another great year!

Thanks guys. Look forward to 2007, hopefully it'll be a good running year!