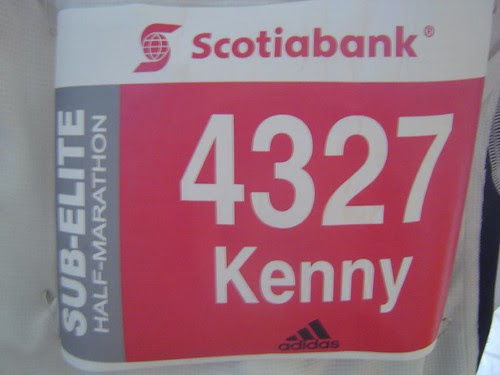 It was really tough picking a pace for this race, as it was the first real race I've done since the Sporting Life 10K in May. A lot has changed in my training since -- I adopted the Pfitzinger program -- plus I'd also got rid of a lot of excess pounds. My last two races, a 15K and a 10 miler in which I didn't go all out for, showed I had potential to do a lot better than the 1:34:29 best half I had in October, 2005. Last year, I ran this course on a windy day in 1:35:16.

My last big run before the race was on Wednesday, an 8 miler with 5x600 intervals. I took Thursday and Friday off and on Saturday, I did a two miler with about 600 metre portions done at a 4:30 minute kilometres 'race pace'. When you take a few days off, I find, the aches and pains suddenly amplifies. I know it's your body repairing itself, but let me say that the Saturday morning run didn't leave me too confident.

I spent the rest of the day napping, eating lots of carbs, watching movies and was tucked into bed a 9:30 p.m. Slept reasonably well and got up before 3 a.m. for a bagel and peanut butter, plus more Gatorade. I hydrated well over the last few days. I was up at 5:30 and out the door at 6:15, confident I didn't need a bathroom break.

Today's a big race day in Toronto. 12,000 doing the full, half or 5K attached to the Scotiabank Waterfront races, and another 30,000 doing the breast cancer 5K. At 6:30 a.m., the streets were busier than rush hour, given that so many streets closed off.

My sub-elite bib got me into the preferred, then sub-elite section, but I opted to stay in the preferred area. Fran and I bumped into each other and we chatted a bit. We found the 3:10 pacer (who, by the way, really didn't do the greatest of pacing jobs - he came in alone at 3:06 without his group!).

Just before the start, it was announced that yesterday a world marathon record was set in Berlin and the MC said today's condition was perhaps great for a personal best. It was cool, slight wind, almost perfect race conditions. He was right.

The first 3 miles were relatively easy. My right calf was tightening slightly so I backed off just a smidge to see if it would become a problem. Luckily, it shook itself off. The 3:10 pacer took off after the first mile and was pacing his group way too fast -- trying to buy time from a slow start, perhaps? I let them go, seeing as my splits were at pace or even a bit faster.

A few things to note about this race. I found the 4:20ish pace that I ended up keeping for most of the race actually kinda comfortable. I was not breathing hard, my muscles were not too tired and I felt I had a bit more. Patience, I told myself the first 6 miles, it's about to get harder.

I caught up to Fran before the 10K mark and he was running ahead of the 3:10 pacer. The group had gone on too fast. I said hi, knew that my pace was sustainable and decided to continue on faster than 4:27 pace.

By the time I reached the turnaround (12.5K mark) I knew that I had made up at least a minute of buffer time to achieve the sub 1:34. There were only 5 miles left and I felt I had more left in the tank. So I kept it up.

Two lessons learned. First is hydration. I'm finally getting comfortable with drinking on the run. I know they say pinch the cup but only today did I realize that you pinch it so you have a small opening. I drank from the cup much like I drink from my fuel belt bottles. It was the best racing/drinking I've done. I ran though the water/Gatorade areas, I pointed at the cups before receiving them, I gave myself room before taking sips. It was working well and as a result, I only skipped one water station (by choice).

At the 15K, 16K and 17K marks, I was pouring it on, passing runners. I reminded myself that as races go on, a lot of runners get slower and you can get suckered into believing you're going at pace. I targetted runners ahead and maintained pace until I caught up. If there was a fast runner going at a good clip, I'd hook on.

At 18K, I saw Lee run by -- he was in the year ahead of me in journalism school in university and I knew he also qualified for Boston this spring. 'He's a fast runner,' I thought and started to pace off him for about a kilometre before he really made a lot of ground. But by then, I found my next gear and targetted runners ahead of me.

This brings me to the final lesson and that is this marathon training program. The final 3 miles were so easy compared to other races I've run. I didn't fade like I usually do. I was passing runners and stepping up the pace. I realized it was paying off. The LT/temppo runs of 4 to 7 miles made the last stretch seem almost easy. The interval track work made running fast not foreign to me at all. And the strides I've been doing the last 14 weeks have improved my running form -- I have faster legs. 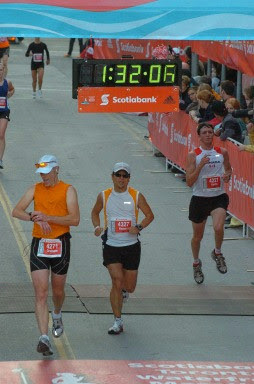 As I was down to the final straightaway, I turned it on and I knew I had the PB in the bag. Within the final few paces, I looked at the clocked and my jaw dropped when I saw it was just clicking by 1:32:00 which meant my chip time was in the 1:31 range. I smiled, raised my arms, and pumped my fists. Apparently, according to Jelly and Frankie, the smile hasn't ceased.

Nice job with the PR Yumke! You're in great shape for marine corp. Pace bunny was 3:06 eh? Man, I should have known when he pulled off that sub 4 min km that his paces were going to be all over the place.

Thanks guys, and good to see you, Lee.

Fran, need to hear more about your race. I really think you guys got shafted on the pacer. He was pacing noone into the end.

Well raced Kenny! I hope you're still smiling, you had a fantastic race!! =)

that report was very gripping! You're well positioned now for your big event.

WOW, you are looking really solid and ready for The MCM. Great job!

So thrilled for you. I love these experiences - a 3 min PR?! SWEET.

Awesome Job Kenny! Pfitz has really helped and I am noticing in my runs as well. I guess I'll find out in a few weeks... unless I find a race between now and then.

Congratulations! Great time, and what great consistency throughout - way to go!

Great job! It must be nice to have that one in your back pocket before the big day at MCM.