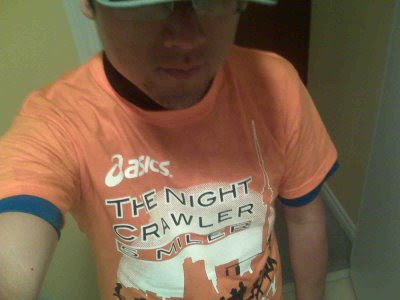 Update: Race results available here
There's this saying, I race for the T-shirt. I'd have to say that this, my most favourite of races, is one I do for the T-shirt (best designs ever), the hot dogs and the community of runners that it fosters.

This is now my fourth straight running of the Night Crawler 5 miler (race report 2008, 2007, 2006). It's special in that it's a weekday race (Wednesday evening right around the first day of summer) and thus it tends to attract a small but dedicated crowd.

That was all the more evident today as it was raining pretty much all afternoon. I arrived and there was a crowd of people gathered under the tents. I took the shirt and immediately checked it into baggage check and waited for the start.

The course is an out and back and today, we had a tailwind for the first half. The wind was brutal, with gusts of up to 50 km/h or 30 mph.

Mile 1: Went out pretty fast for the first kilometre, which included a downhill section. Clocked in a sub-4 kilometre then decided to dial it down a bit. I wanted to feel really comfortable so I slowed down just to the point that my breathing never got laboured. Passed the first mile mark at 6:27. I saw Lee go blasting out and decided not to give chase when I looked down at my pace. Didn't want to burn out and I wanted to at least salvage the race as a tempo pace run.

Mile 2: By this time, we were pretty much running in small groups. There were a few runners ahead of me, including a guy who had his laces untied. I was averaging about a 4:10 kilometre at this point and still felt good. I'll note now that I switched back to my OLD Asics GT-2130s for this race. They're pretty much spent but I didn't want to race in my new shoes (which I'm pretty much giving up on when I pick up my new pair in a week or so). Would note that from this moment on, I was never passed until the end. Mile 2 in 6:41.

Mile 3: This included the turnaround in which we hit a WALL of wind. It was unbelievable. I was running alone, having dropped a few runners I was with and looking ahead, the next group of runners were a good 20 to 30 metres ahead. This kinda sucked as I had no one to draft. This section included a downhill followed by a few uphills as we were climbing a ramp up to the bridge. I was really trying to maintain a good pace while fighting the wind. As I reached the 3 mile mark, I had made good ground on the a long tail of runners (they were running right behind each other, about 10 of them). Mile 3 in 6:45

Mile 4: The next mile we were running on boardwalk, which kinda sucks for two reasons. 1. It isn't stable to get good footing and 2. Freaking Canadian Geese crap all over it. I had to actually play dodge the goose droppings while fighting headwinds and doing a 4:20 kilometre pace. That sucked. During this mile, I was starting to pass runners and when I passed this girl, she suggested we work together. I was totally up for it and then we took turns taking the headwind. I'm very happy we worked together, each one of us taking the lead and ramping up the pace for about a minute before the other person took over. We gradually made our way pass a few runners and got another runner to join in. Teamwork!!! Mile 4 in 7 minutes

Mile 5: The last mile of the race is pretty challenging in that there's a big hill that's about 400 metres long. It's a good climb. The three of us were still working together. We reeled in another group so that there were now six of us running in a pack. I could see the girl wanting to take the lead but she was boxed in. So we tucked in for a straightaway and got ready to climb the hill.

This course is my home course and the hill is often on a route I take. I often power up that freaking hill, making it a game to fight my way up it and even up the pace. As the six of us started climbing, I felt great so I started to go a little faster. Over the next 200 metres, me and a guy started making a lot of room as we scaled the hill. By the time we reached the top, we had left the others behind and we tucked into it, ready for a slight downhill before the final 300 metres. How fast were we going? In the last kilometre, I did it in 4:12 one of my faster kilometres.

As we reached the final 200 metres, I started to kick it into high gear. Had lots left and saw the clock tick toward 34 minutes. Decided I wanted to beat it and did, punching my Garmin in 33:46.

Saw Lee, who had blasted the course and came in around 32:40, fantastic run. We caught up with him and met up with his wife who also ran.

Perfect race. Cool, drizzly with a side of hot dogs, doughnuts and conversation with fellow runners. A perfect way to welcome the longest day of the year and the first day of summer. I'll be back next year for all of this and a T-shirt.

I got my second fastest time of 33:46ish compared with the fastest time of  32:49 and slowest of 35:42. I have to say that this race is a great indicator of my fitness going into marathon training. Given the wind and the fact that I didn't go all out, I'm pretty pleased with today's showing.

Wow that's fast and you weren't even going all out.

That was serious fun, despite the monsoon. Nice run, great recap.

I was wondering how brutal the wind would be down there. That does NOT sounds fun. You handled it very well and knocked out an impressive time. Congrats! I'll try to make it out next year. I'm sure you'll be there for number 5!

WHOA that's a fast 5 miles! I love these night races. There's one in Alexandria on July 25th, are you here then? I'm looking into it, sounds like fun.

Congrats on kickin' ass over there!

I forgot about the goose poop!

I think the difference in splits between my first mile and last one was close to 2 minutes -- the old adage of not starting too fast is easy to know and sometimes hard to practice. Naturally, I got a side stitch as that bridge came up: another sign that I should train more at race speed or higher leading up to race. Nice race though.

And hey, a free t-shirt that actually fits!

Another great showing! I'm glad running is going well for you! =)