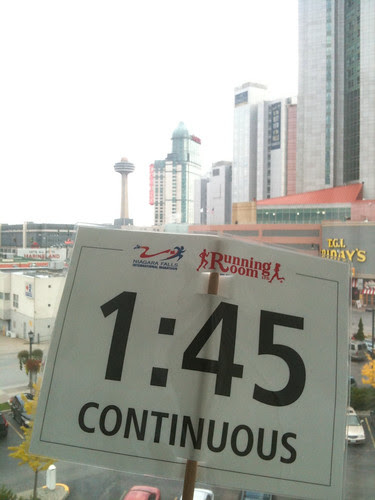 Before I start, I want to say to any seasoned runner who hasn't: volunteer to pace a race. It's an amazing way to give back, get inspired and contribute a little extra to this sport. Especially if you've got this pace thing down. Which apparently I do.

I arrived in Niagara Falls Friday night, mostly so I could attend the Friendship Run where I got to meet some runners, have breakfast with John Stanton and hear really inspirational stories from relatively new runners. Had fun at the expo which was way better than Goodlife and it was fun to walk around the Falls. Settled in for a low key night at the hotel and had a sub instead of pasta for dinner. Had plenty of carbs in my anyways.


Since Niagara is a point-to-point course, we boarded school buses up to the half start. Chatted with a guy from Texas who does a lot of sightseeing vacations wrapped around running. We quickly got to the race site where I did a kilometer or so warmup. I ran it a bit fast and was a little worried i would be THAT pacer who went out too fast. I remember thinking that it's gotta feel like Sunday running pace. 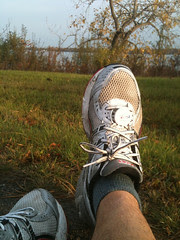 With 50 min to go, I put on my bunny hat, and lined up for the portapotties. Funny thing, the 2:15 pacer was also lining up when the announcer said 'if you are a pace bunny can you come up to the front.'. Both of us laughed because we were not going to budge from our spots, so we sheepishly waved our signs. The runners lining up laughed as well.

After ditching my bag, I moved to the front corral to where I thought I should be and was quickly surrounded by runners asking me about the two-hour bunny (there was supposed to be one, no idea where) about the course (flat and downhill at the end but I've never run it). I had a great good of runners who lined up behind me, some asked and were happy when they heard i was doing continuous, not run/walk. A lot of Americans in the crowd as they were asking for the mile splits. Luckily, 1:45 is simple to remember. Five minute kilometres, eight-minute miles.

Among us were older women who said they hadn't trained recently but had run 1:45 before, several women my age or younger looking for PBs, a guy running his first half and quite a few people who wish there was a 1:50 pacer so would keep behind me. I told the group that we'd go continuous, not go out too fast, slow at the aid stations and run consistent splits. What I didn't say was "and this is my first time pacing." I wouldn't have gone into this without confidence and experience in running long distance races with stable splits. I know I can nail them when I am on. Figured they wouldn't be the wiser if they didn't know. ;).

First question that I got a quick answer to. When it's not windy, those pace signs are pretty easy to hold. I held on to mine for the whole race with no problems. 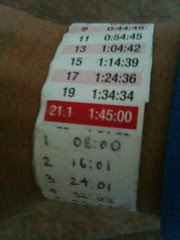 We took off and I tried to keep it easy. I remember all the bad pacing experiences I've had and the times when I went out too fast. Runners racing train up to the edge, and 10 seconds too fast at the beginning can raise their heart rate a little too fast. It had to feel easy, and I kept checking my Garmin to make sure I was on pace. (I decided wisely to add mile splits to my pace band the night before).

About pace groups. We can get a little chatty, and it's a lot of fun. I was keeping it light, asking questions, getting to know them. One runner was a pack a day smoker earlier this year and college runner who was getting into long distance. Another was running Philly in November and aiming for a sub 4. And there was also a guy who was running his first half, his family was waiting for him at the end. All were from nearby New York state There were plenty of others behind and around me. I was feeling confident leading and the kilometers went by fast.
2. 4:57
3. 4:58
4. 5:02
5. 4:54

I remember checking the 5k split and we were only a few seconds off overall pace. Perfect. About the course. Wow, it's really nice, by the water, flat and fast if you wanted to all-out race. We didn't get the dreaded headwind. The aid stations were about a mile apart and local schools came out to pass out water and that energy drink. They were loud and a nice distraction. The weather was just about perfect. Cloudy, no real wind and on the warm side. I knew people would overheat so I kept on advising runners to take from every station. Meanwhile, the pacing was great. I remember hitting the 10k mark announcing to the group that we were within a few seconds of target. I was so pleased, cause this effort was for all the inconsistent pacing groups I have run with. The runners within earshot were in good spirits and they were already calling me the 'best bunny ever'. I told them to wait a lot more miles to determine that.
6. 4:57
7. 4:59
8. 4:58
9. 4:55
10. 4:56

The Niagara course is beautiful but a lot of it was similar scenery. I found the miles went fast. We'd chat a lot, talk about past races, about training for marathons, about winter running and i gave a few pointers here and there about changing stride. Our friend the time counter downer would announce how much time we had left. Our ex college runner would complain of a nagging leg issue which would then clear up. Because we had mile and kilometer signs, I was able to keep pretty on top of the pace. The sign wasn't feeling heavy and I'd all but forgotten I had run a marathon a week before.

I told the group, it's a 10 mile long run with a 5k race. They liked that idea so when we hit the 10 mile mark it was time to work. We were a lot quieter. Just hard work. I kept up constant encouragement, providing split info and telling them how much we had left. Unfortunately we were now down to the two younger women and some runners I would later find out that were trailing us but keeping me in sight. But I committed to keeping the pace. It was up to them to follow on. At every aid station, I took a cup, drank, then took an extra and offered it to the group. One runner got one of my GUs (Roctaine) and I ended up not using the other one.
17. 4:58.98 (wow)
18. 4:51

The ex-college runner kept on asking if she should go faster with about two miles to go. I told her to pick it up and she did, watched her start to run on, she was looking great. My last runner, who would run Philly, was hurting but she was keeping on pace, a real natural stride. I told her to keep up and that the downhills were coming. I also told her she should have a great marathon with her pacing today. We passed runners and we were able to pick up another woman who finished with us.
19. 4:55
20. 4:58

I missed the time for the 20k marker so I wasn't sure exactly how many seconds I was off or on pace. I ran by feel, I sent Philly girl on to a great finish and gestured to the runners behind me to overtake me. A few took the bait. At the end, I was enjoying it as people were cheering 'the bunny'. Hammed it up for the crowd, pumping the sign up and down while gesturing with my arms to get them to cheer louder. As the finish neared, the announcer said I was the first bunny, and commented that I was only 11 seconds off pace (actually, four two seconds!). Went though giving a high five to John Stanton, took my medal because the girl couldn't put them over my bunny ears.

What a great time. I traded high fives with the gals who ran most of the race with me, then a whole band of runners started coming up to me and thanked me. Some knew my name. It was gratifying and I was gald I didn't let them down. Seriously, if you have the ability, think about pacing a race. Run slower than you can race. It was an awesome runner's high I won't soon forget. This really was my goal race for the fall, I didn't want to mess it up and I also fulfilled a dream of pacing. (Thanks Fran for hooking me up!) I will be back for more! 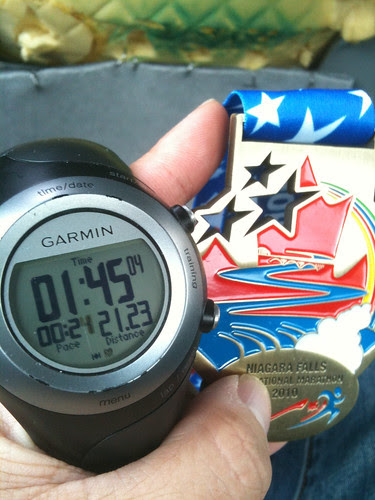 The view of Niagara Falls, Ontario. The finish line is near the falls. 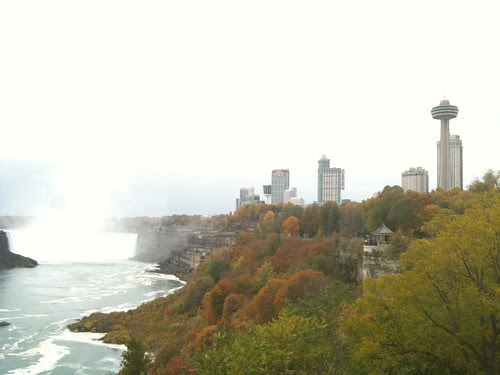 Next stop, Marine Corps Marathon in 7 days and NYC Marathon in two weeks!
Posted by yumke at 5:29 PM

Way to go! That is seriously amazing! My cousin ran the half, I'll have to get her goal time and see if you paced her.

congrats, got the bug now eh? Nice even splits. Smart thing with adding mile splits to the RR pace band.
Kudos for staying an extra night and showing up for the friendship run. It takes a special bunny dedication for an out of towner to show up for it.

Way to go! Good to know people are willing to give their time to volunteer and lead other runners.

Awesome job! I so admire the pace bunnies and you did a great job. Glad the weather worked out ok as well.

Great job! let me know if you ever do a two hour pacing job...

Sounds like you were a fantastic pacer! Any time I have tried to stick with a bunny, they start too fast. It's awesome that you were so conscious of that and held nice, steady splits.

I hope to be confident/consistent enough to step up as a pace bunny some day soon.

Great job! I volunteered as a pace bunny for the first time this year and agree that it is worth it.

Nice post with great details. I really appreciate your job. Thanks for sharing. niagara falls