I’ve been wondering what’s the best way to run the Goodlife Toronto Marathon. Fact: The first half is fast with downhills. Fact: The second half is flat, plus an uphill at the end. Truth: Most of us run the first half too fast, and many of us have positive splits as a result. I did just that last year on this course.

Before the race, I was musing about the possible paces I could go out at. At the top of the list was 3:30, a reasonable challenging time. Heart of hearts, I was thinking about my next two marathons, MCM and NYC, and how they’d be taken easy over the next three weeks: Today would be my only real opportunity this season to throw down a decent-paced marathon. If anything, and if it sounds like torture, it probably was, I ran my last ‘long run’ before NYC in three weeks. Yikes.

I treated today like any goal race, fuelled properly and rested up. By the time I was cabbing it up to the start line, with an hour to go, I was very relaxed. I remember a year ago I was focussed and hungry. Today, I was thinking as a strong run, with options to adjust my goals as I hit the half. I bumped into a few friends, including Fran, who was pacing the full. My main marching order to myself is to run to the edge of pain, but not to put next week’s pace bunny assignment in jeopardy.

Of course, my slow prep saw me seeded a little back at the start, but since there were fewer than 2000 marathoners, I quickly found some room and started running. An immediate problem was that my goal pace (8 minute miles or 5 minute kilometres) was not coming natural. So I stopped looking at my watch for the splits and ran by feel. The 3:30 pacer for some reason was far away in the distance. Oh well.

Gorgeous day. I had debated the night before whether to go with a long sleeve or T shirt but in the end decided on a sleeveless. I was not disappointed. In fact, it started warming up with the sun. Around this time, a runner turned and looked at me then did a double take. Turns out, he reads this blog. (hello!). That’s another time I meet someone who recognized me.

After running in the group for awhile, I wasn’t feeling comfortable running in the big group. It was still early in the race, but this is where I decided to run my own pace. I started running faster. Luckily, there were a few runners with the same idea, and I found myself running silently side by side with a woman for a good six kilometres. Worked our way back to the downtown core when I started hitting 4:50s (my auto pace came on for the rest of the race).

Hit the half marathon pace in 1:42:29. I looked down, and kinda shrugged my shoulders. I counted that I was 2:30 faster than the plan. Okay, gotta make a new plan. I thought about the 3:25 mark. Sounded like a reasonable plan.

The next nine kilometres were running west, in my neighbourhood, against the wind. Not much to say about this other than that it took a bit of effort to keep up the 4:50s but I was doing it. Also I note that from the 13K mark, I was pretty much in passing mode and it got more pronounced as we got into the race. My legs were fine. I was getting enough water and Gatorade. And I had plotted out how I’d use my gels about every five miles. If there’s one thing I know now, it’s that you have to fuel properly, you’ll thank yourself in the end as you can bonk in mere minutes.

Great splits, I thought, as I was running past my condo at 38K. Four more kilometres really didn’t seem that far. When you think that in a marathon, that’s a good thing. A great mental boost is had by passing runners, doing so only by maintaining pace.

The march up University is pretty cruel. It’s the widest street of the entire race, and has no shade. It’s pretty lonely by this point and you really feel like you’re running. I tried not to get distracted by the slowing and walking runners. I just looked at the spectators, giving them thumbs up to their cheers. I was counting down the streets. At some points, I thought about slowing down but I knew that’d be pointless.
38 04:48
39 04:54
40 04:51

Of course, the last two kilometres took forever to get there. It was a long slow incline. Powered through, enjoyed the crowd support and saw that I was gaining on more runners. Believe me, saying ‘looking strong’ to a runner at the end really helps. Thanks spectators!
41 04:54
42 04:43
.2 01:30 at 7:10 mile page

And as I was powering down the last few hundred metres, Lee and Julie called out my name, and I was going faster, pumped up my fists as I heard my name being called.

I wonder if this had been a time goal race, how I would have done today. Could I have gone out at 3:15 pace? Probably, but this summer didn’t become a fast marathon training season. It was about going the distance three times. I’m happy that this marathon didn’t get tough until the final two miles and even they were manageable. I’ve learned a lot about what my body can do over the long distance. Ten marathons (now 11) can get you to a place where you know what you can comfortably do.

And as for that question about how to run that race, I had a surprising result. For a race where I barely looked at my pace band, for one that had a fast first half, I did what I thought was impossible. I ran an evenly paced marathon, from start to finish. 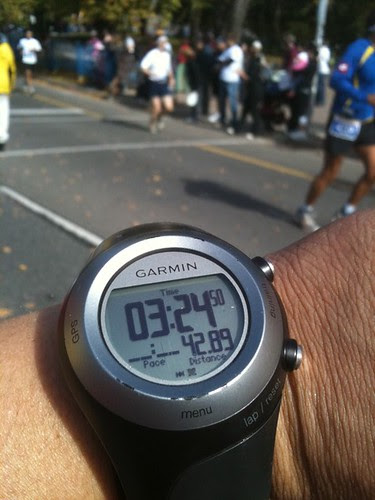 Hell ya, I’ll take that. My legs are fine. I took an ice bath and I think I’ll be running again by Tuesday. 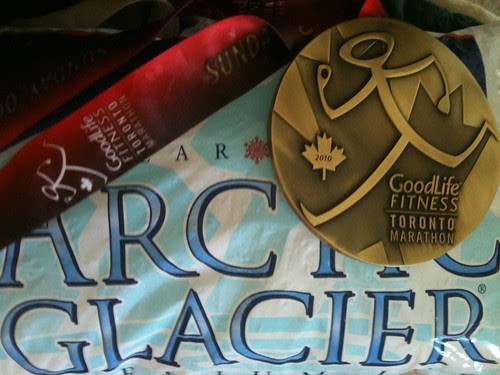 Congrats Kenny!! What a strong race and awesome splits. (within 7s for first & second half!!)

Nice to see you, as always!

I really enjoyed the course, especially the first half. I'll be back!

Congrats, and way to finish strong!

Congratulations! Maybe I'll see you at MCM! Can't believe it is two weeks away now!

Kenny great work man! I wish I could run like you.

Congrats on a sstrong run yesterday.

You rock! Great Run. Wearing that huge medal, gave me sore shoulders\neck. or was it my running form. :)