Damn you Boston, give me those 59 seconds back!

That news ruined my scheduled recovery run. Was supposed to do 8 miles at a slower pace but for some reason, I stepped it up and soon I was running harder than usual, faster than usual.

If I want to run the BAA's little marathon in 2013 and beyond, I gotta get faster or stay fast and get older. The Boston Athletic Association tightened its qualifying for the marathon, and I can't really fault them when it comes down to it given last year's registration stampede.

The result? Rolling registration and an ultimate BQ (to place you at the front of the registration line) of 2:50 for my age group. Sure, I can get a 3:10, but there will be three groups of runners (2:50, 3:00 and 3:05) who would line up before me. Suddenly just qualifying by the skin of my teeth is like getting general admission for a Ticketmaster concert when all the 'superfans' snapped up all the good seats.

The moment I qualified for Boston, with a full 3 minutes to spare, I celebrated with some certainty that I would run Boston. In fact I remember telling my buddy after the finish line, "I'm going to run the Boston Marathon." I couldn't imagine crossing the finish line at a future marathon and without that 5 minute buffer I'd say, "yay, I can line up behind all the faster runners and maybe I'll have a chance to run Boston."

Ugh. Probably why Adidas is shilling this 'qualifier' gear. 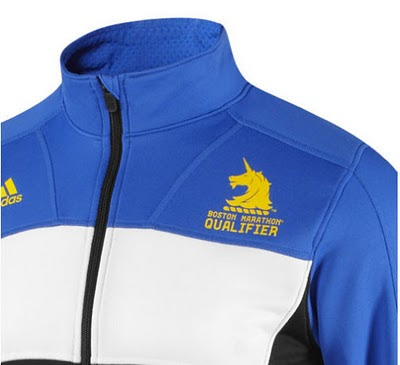 Will we complain about the new faster standards? Yes, especially on those painful training days. Will some think that a BQ is even more out of reach? Yes, I believe that I've got some work to do if I want to run it again. I'm a lucky one, I've already booked my second trip to Hopkinton. I know there are other races to do, other reasons why I do marathons, other things to check off my running list.

But one thing I don't understand about the BAA's new rules, one of the things I just loved about their old vaunted qualification system. It was a quirk, one that many of us had put in as a buffer. It was two seconds a mile. Sure, you could aim at a 3:10, but that 59 was that gimmie. The version of our sport's mulligan.

But they took it away with this little phrase: "Unlike previous years, an additional 59 seconds will NOT be accepted for each age group time standard."

Fine, BAA, round it to the neat :00s, we'll revolt on the streets. Just as well, I'm already running faster.
Posted by yumke at 8:59 PM

Great post. I was hoping to run a BQ this year, need to run a 3:15 and my best time from last year was 3:22, in order to qualify for next year. I am not sure if that is still a realistic goal for this year now with the changes.

Hmm there goes my dream of running a BQ, well at least until I turn 60 or so and the age groups begin to give me a bit of love.

excellent post. thank you for sharing. although i understand the reasons for the changes and i support the rationale, i can say that with a certain bit of sangfroid having been to Boston once and then having qualified again last fall.i keep getting faster and older so i'm hopeful that i'll run over heartbreak hill again, but the changes will definitely dishearten many. if i don't, again its easy for me to say, there will be other amazing races - that much i can definitely count on.

Thanks guys, I know that a lot of us think about BQing, but it's yet another of the amazing races that are out there. NYCM is one that rivals it big time and smaller ones I've loved as well.

I'll still chase the unicorn, even if my shot at running Boston any time soon has dwindled significantly.

If you get BQ-20 minutes, not only you are pretty much guaranteed entry into Boston but other difficult to get in races as well such as London and New York. Onward and upward as we get faster and more competitive.