This year's edition of the Harry's Spring Run-off was a little different. The last two years, I ran the 'double,' that is, I ran the 8K followed less than an hour later the 5K.

As races go, no matter how more corporate the Run-Off has begun, it is clearly the first big race of the spring. It has a legendary hilly course and it ultimately very challenging if you set to go race the sucker.

This year would be my chance again. No excuses of a back-to-back schedule. The week before the race is supposed to be my taper for Boston, but I was still throwing mileage instead of taking it easier. From Monday to Thursday, I put in 30 miles, not a bad amount given how busy it is.

Speedwork? That's gone to crap this spring. Haven't done it. Tempos have been non-existent and the last time I visited the track a few weeks ago, I ran two miles at marathon pace, no faster.

Anyways, having done plenty of endurance and pace training, I was ready to hurt. I ran enough of these races to know it's probably better to have your heart going so I did some 100 metre pickups. Man my heart hated the pace.

I watched my co-worker head to the front of the first corral while I let a good crowd get between us. It's my own race, I thought, and psyched myself for 35 minutes of pain.

The start was good, I tried to keep it comfortable without getting my heart rate up to high. Already people were jockeying for position but I kept a good cadence and just watched racers around me who looked comfortable.

The run-off has two major downhills, two major uphills. The first downhill comes at the mile mark (1.6K) and we plunged down the hill.

Obviously, we weren't going quite at full speed. At the bottom of the hill, I sensed that the runners around me had clearly gone out too fast and were settling into slower paces. I remember the moment well, because it was when I moved from behind a runner to beside him, and started to race.

The first crappy uphill is around the 3.5K mark. You can see my splits around here aren't bad, 4:19 to 4:27. I passed a few runners but I knew it wasn't the hill that was the issue, it was the recovery on the flat past the half way mark so I could race the second half in a good way.

The path had thinned by this point so if I wanted to make some ground, I'd have to pick it up. The start of the 5K mark is the second big downhill. I decided to go a little harder

That was followed by small rollers. I was hurting a little at this point. My body is not accustomed recently to such speedwork, so I relied on, what you call it? Guts. Or it was more like, Body: "crap, I want to stop so badly." Mind: "STFU, just get to the 4 mile mark, you can do one mile after that in your sleep."

Not bad. The last two kilometres slowly rise, so I just kept going, trying to pace okay to save some room for the last big hill.

Now, I'd like to write about the final hill. Spring Road. We plunged down it after mile 1. I ran it the other day and marvelled at how freaking long and painful it was. There are good tangents to run it, but in the end, it's pretty much relying on your guts.

The hill itself is about 350 metres and you rise about 850 feet. That is after you have risen 50 feet in the half mile leading up to that point.

Anyways, here's a shot of the hill more than halfway up. See the pain? 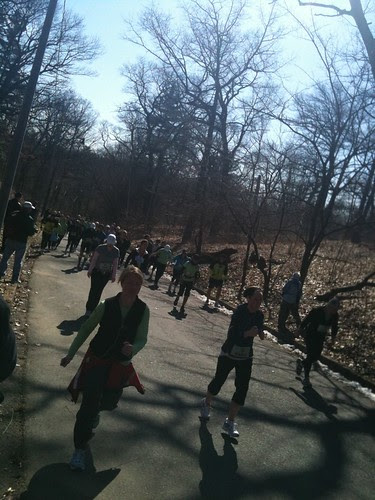 Took it hard but had enough energy to run it in and turn the corner.

Final chip time was 34:16, or about 20 seconds off my course PB. Happy with the 4:19 pace. And my legs weren't banged up that much, just put in a strong long run this afternoon. 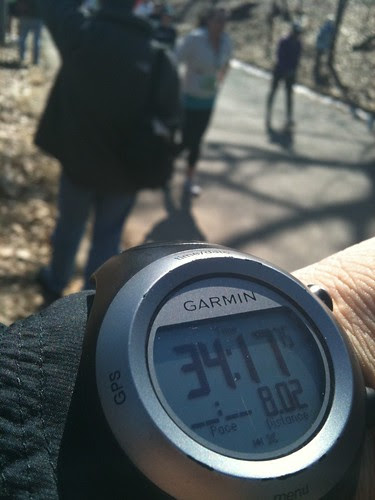 Good job. That is a solid result!

Congrats Kenny! Strong race! Is that last hill the same as the 5K finish? That was brutal last year.

Just as well I ran it in Boston at the same time as the race, as I HATE that hill. Well done!

Great job! Those hills are a bitch.