Running to (and through) Boston

In my head, I've been trying to put that word "taper" aside till later this month. It's not happening, at least the big kind that I often look forward to. In 8 days, I'll be in Hopkinton lining up to run to Boston. Today, I just finished my week before the marathon mileage and all week, I've been pretending I'm in normal training.

The taper monster is around the corner. It wants me to kick back, relax, luring me with the promise of more carbs, more salt and more time to not run so I can do things like twiddle my thumbs, not drink alcohol, blog more and watch running movies.

The last time I had a massive goal marathon, back in the fall of 2009 (yes, that long ago), I was peaking at 70+ miles a week. I saw in that schedule the week before my marathon, I put in 42 miles. Not bad. This cycle, I'm not peaking at more than 55 miles a week, yet last week I put in 54 and I just finished 46 miles for this week.

A lot of marathon programs, even the more 'advanced ones' have you ramping down for the three weeks before race day. The usual formula for a 55 mile peak would be

I really like to rest up the week before the marathon. I'll go as low as 10 miles (which I did on the week leading to my BQ marathon) as long as you throw in some short quality and pace work in.

Which leads me to running through Boston and tapering in general.

I want to treat Boston as yet another victory lap, but also acknowledge that I have no business going out fast. I've been too lazy and time-strapped to do the type of training I did in the summer of 2009. So Boston will have to be a training run. Don't get me wrong, I'm not going to go out at just long slow distance, but I'm not going to test the red line by any stretch. I have a time goal in mind that on paper will look pretty good and not have me slamming into a wall (fingers crossed).

On tapering in general, I believe in keeping the body at alert. The three week taper is a good idea, only if you don't totally take the foot off the gas. I like the Pfitzinger program I've been following for the past four/five years in that the mileage doesn't drop too fast, and it also calls for enough quality work, speedwork and races to keep your legs (and heart) ready for race day.

So while I'm gearing up for Boston, I also don't want to bonk on that course in a big way. Next seven days will be a 'step-back' week with an ultra long run at the end of it. If I get no more than 15 miles pre-Boston, my body's not going to fall off the cardio wagon and I'll lose 3.5 months of training. I know it, my body knows it.

So with that, the one-week taper is on. What will be more interesting is rebounding from the marathon to get some peak mileage the week after so I can really taper for May 15. 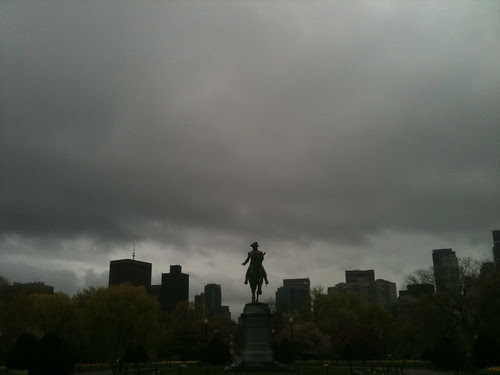 You are such an experienced long distance runner and marathoner at this point, you know what you can handle and how to get to the finish line feeling good but also knowing that you didn't slack off by any means.

I've done the three week taper in the past, but have admittedly tapered more than I needed to during that three weeks - used it an as "excuse" to really take it easy, and I think it really caught up to me by race day. I felt rested, but I also felt "flat".

This time I'm doing a two week taper with a drop to about 80% of peak in week one, and then 50% of that for race week (before the marathon). For me, this will mean about 80K and about 40K.

Having run a really strong "training run" marathon last weekend without tapering mileage, I'm hoping this will work well... we shall see.

Good luck in Boston and enjoy your victory lap, you deserve it big time!