Good news, it's the taper

The last time I flew out of Chicago, a day after running my first marathon in 2006, I envisioned revenge. In the years that followed, I understood the beast that is the marathon. I got faster, a little wiser that I started clicking off marathons at a rate that, I believe, would set me up for a triumphant return.

Chicago 2011, I thought earlier this year, would have me not hitting a wall, hitting instead my splits, and the final chip time would be faster (I didn't care by how much) than my first.

The bad news, I'm still what I would call 'slightly injured.'

The good news is that it's the taper.

Yesterday, still babying my right heel, I got my 22 miler in. Last week, a 20 miler. In theory, I have the fitness and endurance. What I don't have is the confidence to find that natural pace I've known for all these years.

Since waking up to the fact that my heel issues would not just go away, I've been icing, stretching and rolling. It's made a difference, like the achilles problem I had a few years go. Eight days ago, my 20 miler didn't leave me limping, but I was clearly avoiding a full foot strike on the my leg. So my body's been adjusting. My left leg's been taking the load, my right's been striking the front of my foot. Yesterday's long run felt better. My heel held up a lot better.

So while the mileage decreases, I have a great chance over the next 20 days to rest up, stretch and ice that heel so I'm ready for Chicago.

It's been years in the making. I'll take the next three weeks. 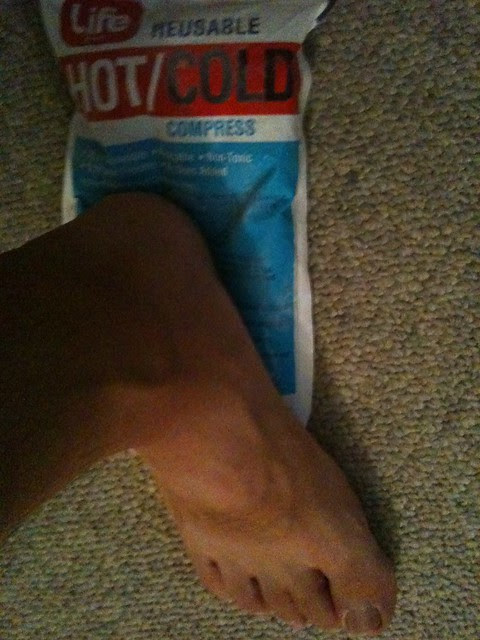 When you come to Chicago, stop by the Runner's Edge booth at the expo the day before. I run with the store's club, so I'll be working there.

Hey Ted, glad to hear you're still running. Will likely be visiting the expo on Friday but will drop by if I'm there Saturday. Hope the running is going well.

Hi,
I came across your site via My Running Shorts. I am also struggling with Plantar Fasciitis & training for the Toronto Scotia Bank 1/2. Icing, stretching & physio are helping a bit. You mentioned rolling too. Do you use a ball or roller?
Carrie

Hey Carrie, sorry for delay. I do roll. You can use a tennis ball and roll your foot underneath to work the muscles. I actually roll my foot under a rolling stick. Good luck with your recovery!