As I charged into my final mile of my 10K run today, I was gaining on another runner and his dog. He was running bending down as if to pat the dog on the head and in the span of two strides, he unhooked the leash...
***

After a particularly late night in Boston over the weekend, I found myself sitting at the corner of my bed, 8 a.m. with barely a few hours of sleep. On the calendar was 16 miles. I had nothing in me. But I set out just to run. I left the hotel where I stayed in April of 2010 and started a familiar route. To Boston Common, where in the spring, one day it fills with thousands of runners lining up to board school buses.

So hung over, I could not find a comfortable pace. My legs were lead, but I continued to run. Down past Cheer's, to Beacon Street, where I crossed a pedestrian bridge, then an actual bridge to Cambridge. Across the river from which I trudged, hundreds of cyclists were participating in the annual TD Mayor's Cup ride. I could see florescent dots of cyclists streaming east.

It was there where I tailed a few runners. As many in Boston do, one had had Boston Marathon gear and was going at a slow steady pace. I instead trailed a woman who was going at a perfect pace for a hung-over runner. We stuck to the gravel path that has be carved out by the countless runners who have trained on the path. Slow felt comfortable, almost normal.

Miles later, feeling a little bit better, I found myself in front of Boston University. I got lost for a moment, then spotted the Citgo sign.

Streets were deserted and it was an odd thing. A whole stretch of road that makes up part of the last mile of the Boston Marathon was clear for the cycling event. So I ran on the 'course', alone, under the overpass, and up the ramp, which in years past were crowded with fans. It was nice to tackle the hill, take the right on Hereford, left on Boylston. Not many times can you run that route without a car. Not many times you can run that route at all.

I ran on the sidewalk down Boylston, my hangover cured. The block that on one day of the year is the best finish line anywhere was cleared away by a car accident down the road. So I ran back on the street. As I approached, I thought about sacred ground, and how moments like this are fleeting, so in mid stride, I bent down and touched it for good luck. After 8 miles, I felt revived. 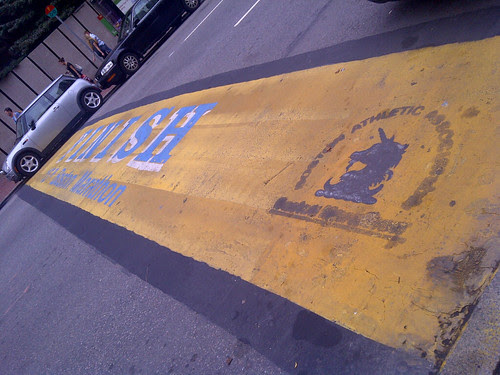 ***
Unhooked by his crouching owner, the dog did as dogs do when untethered. He took off, into an amazingly high gear, sprinting around the park, heading right, left, and in a circle, happy.

I looked and smiled, but not too long because today I was running with some pace. In the first time in a month, I was feeling the hurt. The heel was not complaining much today, even not at all. So the hurt came with effort and it was the pain that feels good, one that comes with a final 4:32 kilometre.

I thought about my trip in Boston while ramping up my pace. I remembered the speed that got me to hallowed ground. I remembered what it felt to run without babying my right heel. Over the last 30-plus days, I had no way to get below 5 minute kilometres without having injury stalk.

Over the past month, I had been afraid I had lost the pace and running form that I built up to over so many years. That is, until today. Today, unleashed, I felt like there was nothing but open road ahead of me, many miles to keep.

Very nice post. You could write for a living. :-p. Glad you got the stride back.

As if I wasn't already excited enough!!!!!!!!! I can't believe I am going to experience that to myself. CAN'T. BELIEVE. IT.