What does it take, and can I get there?

I took a look at how many days were left until the Chicago Marathon in October. Less than 40 at this point. There was a time, not more than five years ago, that I was going through this exact same marathon preparation. Every day, a run was to be done, or a rest day was to rein in my enthusiasm. Every week marked a major milestone - one more week to go until Chicago 2006.

Difference is, that was my first, and Chicago 2011 isn't. Yes, a big city marathon. Yes, thousands of us are doing it. Yes, the route is the same, the conditions, unknown. Something is different. My approach, while sound, is different, and my preparation, while tried, has evolved.

Backing up, after writing my last post, the night of my 30K, something was amiss. Nothing bad, but that allergy turned out to dog me for the coming week. I had gone a good nine months without a week's vacation, and my body, in the way all bodies do, decided to shut down. Add a 30K race to depress my immune system, and you've got a perfect conditions for sickness. In other words, a full-blown cold.

Fine, but on Monday as we were flying off to Quebec for five days that I envisioned running, hiking, canoeing, relaxing, my hopes were dashed for one of those activities.

Running, I decided, needed a break. The cold took over, the symptoms flared, the Tylenol, the cold medication and the lack of coffee/caffeine (yes, that was probably why I needed the Tylenol) got me feeling a big blah. Congestion, no fun at the best of times, does very little for running mojo. Give it a rest I thought, as my 2006 self would have stressed through each missed day.

Funnily, while 'recovering', I hiked a mini mountain, did a 10 mile canoe trip, and stayed active. Meanwhile, the running days and mileage added up to a big fat zero, stopped in its tracks by fever.

Fast forward to a few days ago, I'm looking at the number of weeks until the taper. Three weekends. Three long runs. Three more weeks and attempts to stack things in my favour. A long-distance runner's mojo can't be flattened by a four-day delay, but a marathon's work needs to be done. Hay, as it were, needs to be taken, and put in the barn. Step by step.

So I'm setting out, just like we all do, looking in the face of a few 30K runs and a 32K. Piling on the mileage, 8 miles, 6 miles, 4 miles, 10 miles in the weekdays. Fighting the symptoms, clearing the chest of congestion (yes, it's yucky) and regaining focus.

I've been lucky to face all my marathon days feeling ready. My nerves are typically cool even if the weather isn't. My chest breathes easy. My legs are rested. The road between here and there? Just focus on the daily run, and I'll get there. 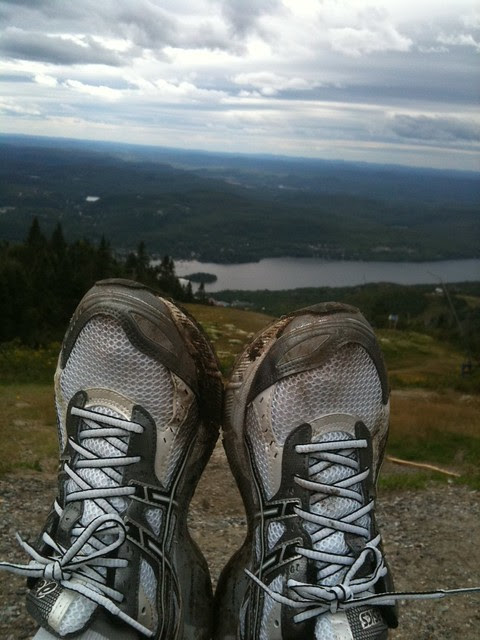 Picture taken after a little hike at Mont Tremblant.
Posted by yumke at 6:30 PM

Nice post, Kenny. Hope you enjoyed the trip despite the cold.

I've been doing pre-seasonal injections for hay fever and it makes a big difference. Yesterday we did a trail in Haliburton with ragweed along the way and it wasn't a huge problem.