The iPod Nano fitness and the Garmin killer 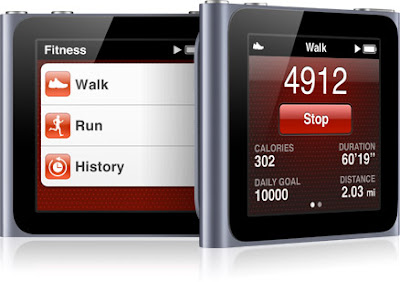 While everyone else was watching for news about the new iPhone, I checked Garmin's stock price. Up 5%. Huh. What got me interested was not the 4S, but the Nano and a focus on 'fitness'. Garmin has been the industry leader in GPS watches for a long time. I've made my way through three watches in the past seven years, starting with clunky versions and ending up three years ago with my 405. While I and other run geeks have been eyeing the 610, with its touch screen, you can not deny that Apple -- already slaying the tablet market, taking more of the general PC market -- has another product in its sights. The fitness device You can argue that Apple has been doing Nike fitness for awhile, and that even the iPhone, with apps like Runkeeper, have taken a sizable chuck of runners who don't need Garmins, something about today's product launch is different: It aims at all almost all the criticisms that geek runners like me have about the past iPod/iPhone products. Sure, Garmins have awesome extra features, like virtual racing partner and custom screens set on anything you want, but even many of us don't use those features. I'm a Garmin fanatic. The return on investment is just too massive, plus I love the battery power and knowing every single detail that I can get my hand on. Also, it's water resistant, which I can appreciate, having my four-year old Nano be knocked out by a rain storm while my Garmin kept on ticking. Plus the data geek in me loves how I can slice and dice a run right up to the 400 metre interval or elevation profiles. For that, I can absolutely justify the $300 or so price
and clunky synching that Garmin has made modest improvements on over the years. But for the masses, I'm not so sure that Garmin becomes an entry-level must have.
Posted by yumke at 11:18 PM

Seems like a cool idea as long as I can wear it on my wrist to obsessively check distance/pace.

I have a Garmin Forerunner 201. Pretty basic, but except for spotty satellite reception/accuracy compared to the newer models, I do like it.

But, since I mostly just use the basic features, anyway, I would definitely consider the Nano fitness when it's time to replace it (hopefully several years from now.)

Hmm. I love my 305 which is the only GPS watch I've owned. I can't imagine running without it. I also like all of the data. I agree though, a runner just starting out will likely be better off with the nano, especially at that price. FWIW, my Garmin only costs $150 at Costco.

I wonder how accurate it would be though. But man that is nice. not having to wait for a freakin' gps signal on the garmin would be nice.

Not that I'm running that much anymore, but in theory the only thing I used my garmin for was distance and pace. If I coudl do that on there (and separate by mile?) that would be great!

Thanks for your comments. Brian, the newer Garmin models are pretty smoking. Love them.
305s going for $150 is a sweet deal.

And hello Leah, nice to see you round these parts!