Do not worry, I will go back very shortly to blogging about races, training and running, but here's something we've all been following. Believe me, I'm not writing this because of the Canada Running Series and their Scotiabank Waterfront Toronto Marathon bag check fiasco, as I'm calling it.

But speaking of CRS, you may have read about the road race wars going on.

Before I get to the point: There are three major spring races in the Toronto area: the Mississauga Marathon, the Toronto Marathon (not CRS run and moved to spring, long story) and the Sporting Life 10K (CRS). 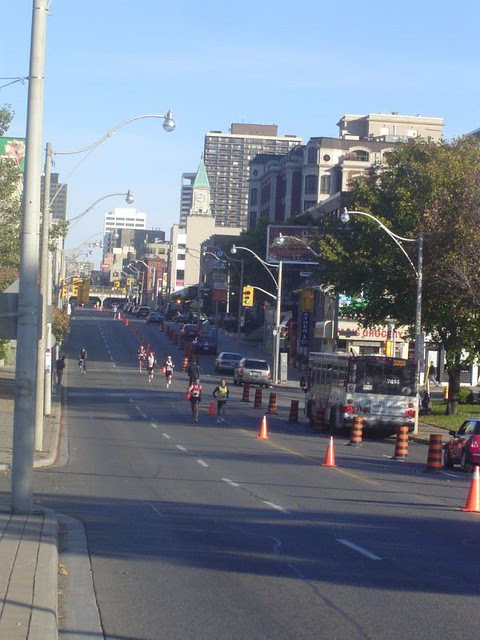 Above, Yonge Street during Toronto Marathon years ago.
Last year, the Big Three looked like this

May 1: Sporting Life (CRS)
May 15: Toronto Marathon (from its fall date)
May 15: Mississauga Marathon


Yes, enough to draw the wrath of commuters.

So here are the road wars, detailed by The Star.

And then today, while searching in Google, I come across this little nugget. Looks like Toronto Marathon guys may be going ahead with May 13 and about to announce it. (Lesson learned about publishing to a site that's being crawled by Google.)

So lets play with this scenario.

The obvious wildcard is whether city council will go with CRS or the Toronto Marathon guys. Or both. Geez, here we go again.

No matter what, I'm having a feeling this is going to happen all over again.

Fascinating stuff. I wonder if they could combine the Toronto Marathon with the Sporting Life 10K-there isn't a 10K as part of that event and it is the same route, as you say-there will be some added logistical challenges but the 10K could start at, say 7:30 and the half at 8:30 and full at 9:30 (as I recall the full starts after the half anyway).

These events are relied on by local charities and clearly the two marathon orgs are competing for business as well. Is there such a dynamic in play in other major cities too?

Even though people seem to prefer Toronto over Scotia in some ways, it seems many of those same people still do Scotia because it's flatter and therefore faster/more likely to result in a BQ.

You note that the Toronto Marathon moved onto Mississauga's date. But if you look at it again, they were forced into May...the first weekend in May'2011 was Sporting Life which could not be moved. There was also mothers day in May, and the last weekend would have been too warm, so they had no choice.

What is more interesting is that Mississauga chose to move to the first Sunday in May for 2012, long after the Toronto Marathon had announced their date.