Is there really beer at the finish? It's a question we all asked ourselves as we were trying to remember what it was like in 2006. The group of us, knowing that it would take a measure of luck, physicality and will to move 26.2 miles really wanted to know. Beer tent or just past the finish line, which is what I recalled.

We were walking around the expo on Friday afternoon when we came across a booth with pace band buckets. I looked, and snapped up two. Goal A, Goal B.

For the days leading up to the race, I was doing rush treatment for my heel issues. I resorted to also using an ibuprofen cream that I bought a while ago at another race expo. The last six weeks dealing with the issues left me a little on the undertrained side. I wasn't confident I could do what in the past I could pull off.

But this was Chicago, a big city marathon, and I couldn't at least give it a shot. I had two reasonably good spring marathons (both sub 3:30) and thought even an injured self could strive for something ambitious. 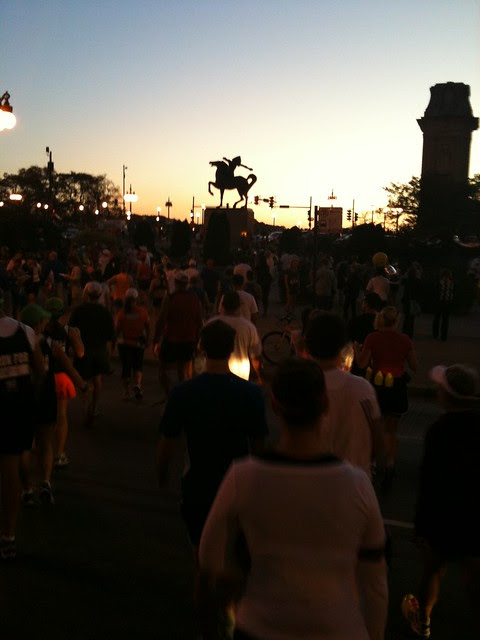 Race morning began like all others and I went through the motions. Breakfast, more sleep, washroom visits and slowly dressing. R. came down for a surprise visit so it was nice to have her support. The hotel was right across from the Start/Finish, so I left my hotel at 6:40 a.m., 50 minutes to the start.

Forgot the craziness that is the start. People everywhere. Made my way past the gear check (why need one) and into my corral where I hung out, chatted with a guy who was running his fifth Chicago. I had shed my throwaway shirt, feeling too warm. From ground level, you can't really get a sense of how big the race is, but I knew it was huge. Still, at the start, and within range, might as well be any race. Just you, your pace, your race. 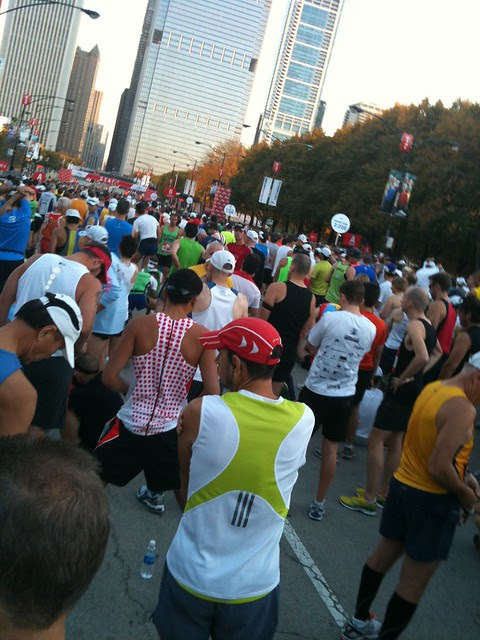 If my first thoughts in 2006 at this race was 'oh my god I am running a marathon', the 16th marathon start was a whole lot different. I was thinking, almost in an endless loop 'how is that heel doing,' 'man it's getting warm' and 'I gotta pee.'.

We wound through the streets, I did also take a few meagre seconds to marvel at the massive crowd, but I digress. Had to pee, was worried about the warm weather and the heel. So much so that I eyed every alleyway (most were taped off to have us not use it as a public toilet) and thought about dashing to the side of the building. Meanwhile, I found myself running a reasonably level of effort. I could have gone out faster, but I told myself to hold back. Always good to be cautious at the beginning, I thought. It's a long-ass race.

The first 5K was pretty much where I wanted it. I had grabbed a 3:40 and 3:45 pace band, thinking i'd come in at between the pace. That's 8:23 miles for the 3:40. At some mile intervals, I saw I was making pretty good time and the pace was exactly where I needed to be.

As we made our way north, I was begging Lincoln Park to come by. This is where lots of runners abandon modesty for a pee break and I was ready to join them.

That done it was back to the business of marathoning, and the other two worries were left. Heel and heat. I had gotten into the habit of bringing my fuel belt with me on big races just as a buffer. Water stations are great, but it's also nice to have a bottle to lean on when you really need a slip of water to boost your spirits (and to take a gel with).

Hit the 10K at the same consistent splits. Because there are so many runners, early on it's easy to keep the pace. It's also amazing that during big races you can actually start recognizing people the that you see on the course. Either someone you saw in the corral or someone a few miles ago. I used a few as markers to make sure I was found out okay.

From the Park to the half is probably one of my favourite parts of all race courses I've ever done. Past by the Elvis impersonator or the gaytown brigade or just the massive crowds cheering wildly. I was enjoying it even while deciding I should find the next portapotty stall in case my stomach was complaining. Lost about 1 minute to that but I find a minute in a portpotty is better than paying for it down the road when you can't find one.

Heading to the half, I started looking for R. knowing she was wearing a pink sweater. Man, it was crowded and I had no luck spotting her.

Back into the loop, I was realizing that in my mind, the miles were chugging by, and also the heel was no longer a major issue. For some reason, a combination of rest, stretching, icing and the cream had largely made those issues go away. The heat, though, I was treasuring the fact that the buildings in the loop were providing us with plenty of shade. Until after the half.

My half split gave me at least some solace that I didn't just pull a 3:40 as a random number. Felt natural, somewhere between long slow distance and marathon race pace.

If the first half of the race was a big-city marathon dream, the second half is by comparison a let down. I was chatted with a friend and we both agreed that if Chicago reversed its course, it'd probably be a more enjoyable race. Miles 13 to 20 features two out and backs that are similar in that you run out west in the sun, and return in the sun, with only some shade and a little less crowd support. 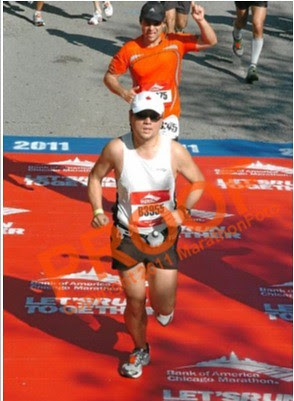 There's not much to say about miles 13 - 20 other that I was hoping to a) survive the heel b) not let the heat have me hit the wall too soon c) avoid cramps.

I was taking water and Gatorade at all stops, loved the sponges that they gave out and ran under the sprinklers they had on the course. I knew I was putting the heat at bay by doing so, but the best call was slowing down to this pace.

Ran strongly past the 30K mark (18.6 miles) and felt I was in a good place. Sure, the course was pretty monotonous but I was really zeroed in on my running, paying attention to those around me. I couldn't really look at the crowd or take in the sights. The effort was needed to keep focus. 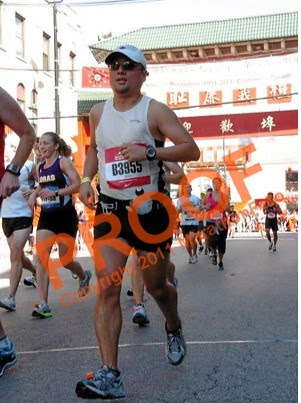 Somewhere after the 22 mile mark, I started to curse myself. The heat was in full swing but I was fine from a cardio standpoint. Cramps. Crap. Left calf. Right and left lower quadriceps. They were starting to make pains.

It didn't get better. Much of the rest of the race had me running slower so I didn't spark off another cramping session, which in theory was going fine, until one runner in front of me decides to STOP mid run, having me collide into him.

Try stopping on a dime while you are cramping and see what happens to your legs. I had to stretch, resume running, then did my best to avoid running behind other marathoners.

The good news is that my pace didn't fall off dramatically. I went from 8:16 miles down to 9:22 at my slowest. Up the final few miles, it felt like it was going forever, but I resolved not to walk for too long. A few runners urged me on to run, which I did do, shuffling along.

At the final stretch, before the final two turns, I started to look for R., who said she'd try to be at the end. Amazingly, I was able to spot her from afar and broke away from the crowd to run to her.

Me running toward R.

The crowd went wild when I stopped. I smiled at her, chatted for a bit and gave her a big kiss while she and everyone else was shouting, 'run, run!'.

So off to enjoy the final 800 metres when the 3:40 pacers, three of them, came on by, hamming it up for the crowd. I shadowed them and -- after a slight break up the hell -- made my way to the final stretch.

Finish lines are a relief. I didn't struggle. I didn't really feel elated, but just satisfied to reach the end. Just like I didn't want to empty the tank, my job was to arrive at the finish to have the heel survive for the next race, and for these legs to take me to the next start line. Worth raising your hands for a photo opp. 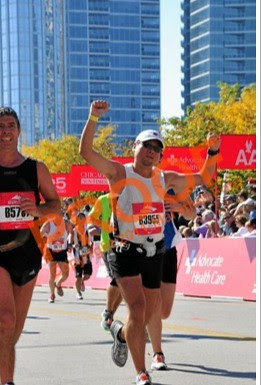 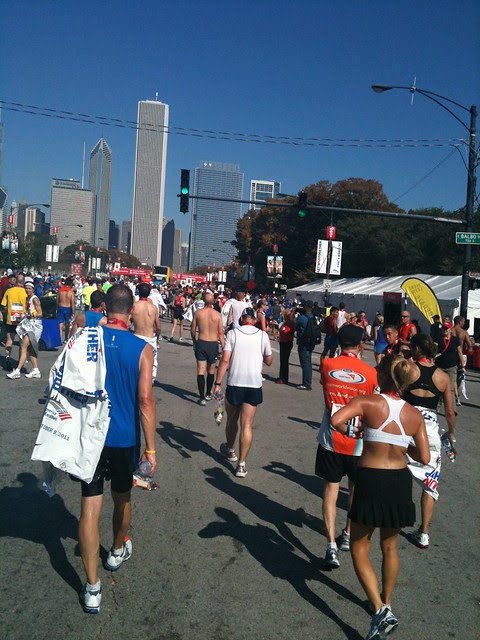 A few metres past the finish, I did a fist pump, and as the volunteer cheerfully draped the medal around my neck, the biggest smile emerged. Fucken eh, Chicago. What a nice homecoming. And a few metres later, beer in hand, cooling station secured, I sat down and savoured my first drink of beer…

That's a post-race reward worth treasuring. 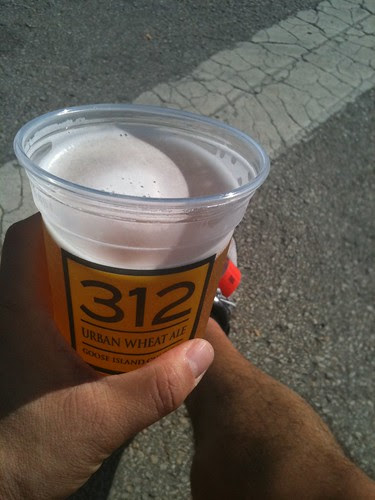 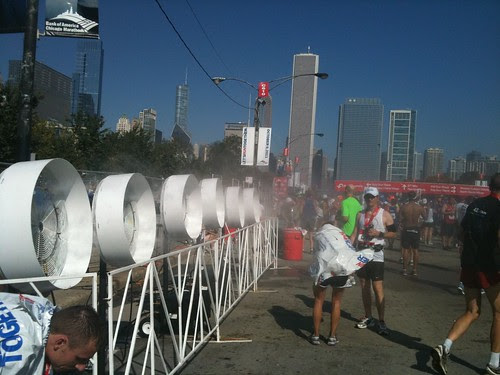 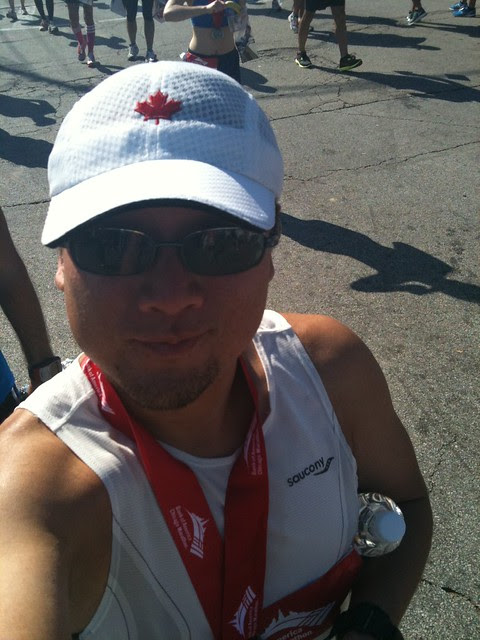 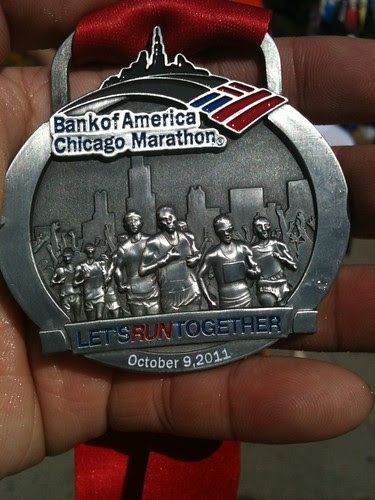 I love how you stop to chat with R right before the finish. Congrats on a great "homecoming" marathon. You are so good at predicting your outcomes... I suppose that's what 16 marathons will do!

Nice run - given the heat and the injuries and the nature of that course (that last half sucks with the lack of shade and crowd support), that's a good effort.

I'd also LOVE to see them reverse the Chicago course. Can you imagine going through Boystown/Lincoln Park that late in the game versus getting all that cheering early? SO. MUCH. BETTER.

I remember that Goose Island goodness at the finish. Hope it tasted as good as it looks. Well done.

Congrats on a great run!