Marine Corps Marathon, yes, my favourite, but yes it's a toughy, especially when it comes at the end of three marathons in four weeks.

Would I advise that you try it? Sure, I did it last year, but you have to put aside some ambitions for speed in favour of making it out to the next race.

This 36th MCM was my 18th, and man it was just as tough as the first. Targetted a 3:45 but the day handed me a 3:50, which I'm not complaining about, seeing as I hobbled in the last few miles. More on that later when I write up a race report. But first, I usher in the off season with a beer, a nap and a few more off days. 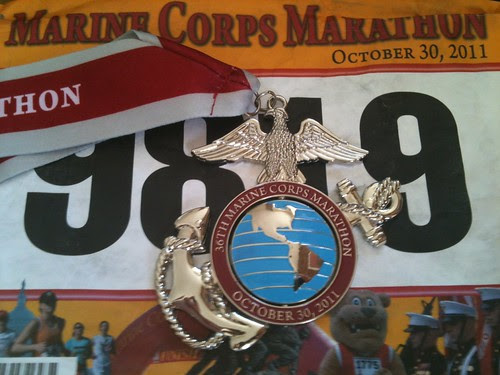 Congrats. You've had an impressive 4 weeks.

Congratulations! You had some tough conditions...well done!

Enjoy the well-deserved race. Not many could do what you've done!

Great job, yet again. Enjoy the off season!