As I prep for the last 24 hours before the Marine Corps Marathon, snow is in the forecast. I've heard of marathons being cancelled over snow, but this ain't no other marathon.

And yes, you heard me right. Snow. In DC. In October, or #snowtober, as others would call it. 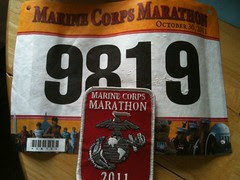 
"Marines don't cancel. If it snows, the Marines might be out there at two in the morning with our shovels and our brooms sweeping the course so it's spotless for those runners."

Marines don't cancel. At yesterday's expo, I found myself in line with an older man and his wife. He pointed at my jacket and asked me about that race. I saw his Marine jacket covered in patches and asked how many he had done and he told me 19.

"You didn't show off your jacket," his wife said so he turned and showed me the back, big bold letters MARINES covered with his five-year emblems stitched into the lower back. I get to earn mine real soon.

"It'll be my fifth," I said as we traded information on how to enter the MCM club, and as others in line started to turn to listen in, we both agreed.

"This is the best marathon," and his wife answered, "people really love it." We said good luck with the race.

They do so because they're prepared, and I'm woefully at this point. I dashed out to the nearest running store to pick up some leg sleeves. Now I'm thinking about it, I'm planning to go get some full-on tights. I picked up an 'emergency' poncho that should give me added warmth with the pre-race wait. And I'm hoping the heat therapy patches will double up as hand warmers as no store had actually stocked up on hand warmers.

And this snow, I think I can deal with it.


I've actually raced (and paced) in this weather.

Ooh-rah, bring it on. Lets just hope that the Metro has the same point of view than that of the Marines.

I see you did it-good for you! Surfing at Logan. It was really bad here yesterday but now it is sunny and the snow is melting-windy though had it been here today and some of the footing would have been bad. I hope you had a memorable experience!