I love race day in this city and in the past decade, I've run dozens and dozens of road events in Toronto. Scotiabank, for me, has always been The Big One, I've run it nine straight years, toeing the line for six half marathons and three marathons.

It's this race that first gave me the marathon bug, where I started to set goals for Boson. Scotia, as we call it, very rarely becomes the goal race in my busy fall schedule. The half is usually a ramp up an eventual full. So a week out from running the Chicago Marathon, I found myself with not a lot of goals and fearful that without a mission, I'd potentially race out my legs before doing New York in two weeks.

Then Nicole, my buddy on Daily Mile, reminded me that she'd been asking me to think about pacing her and Sam to a 1:45.

Actually, she wrote this:

But you're here to read about goals. Well, I'm still going to put my "A" goal out there. I'm not entirely sure I will be able to get it, but I'm going to keep the mind strong and go for it. What will help is that Kenny may run with Sam and I as our personal pacer (skirt and socks not required!)!

RACE DAY
I met up with Daily Milers before the race, and met Nicole (who I've seen at other races) and Sam (for the first time in real life). We dropped our bags and proceeded to the start line.

First 5K
I told Sam and Nicole that the worst thing that could happen at the start is to be sucked into the vortex and find yourself going out way too fast. We hit the first kilometre, according to the Garmin, in 4:58, which was pretty much perfect, just a few seconds faster than the target pace of around 5:01. I was focusing on getting them on 1:45:xx, knowing in the back of my mind that a 4:58 was actually a sub 1:45 level.

We hit the top of University and headed west on Bloor. At this point, something was going on with my Garmin. It wasn't good, as my kilometre splits were happening before the kilometre mark. I figured that the satellites has misfired, later confirmed when my entire run clocked in at 12.97 miles, short of the 13.1 mile race. As we thought, we played hop scotch with Fran and his group. He had initially a large group with him and we were glad to be out of his way.

We then turned down Bathurst and I told the gals that we'd use the declines to our advantage. Again, my Garmin was not faring well, but we were hitting our splits DEAD ON.

As you can see, one of the kilometres logged in at 4:51, but I don't believe that. I distinctly remember hitting the 6K mark at almost exactly 30:00 flat, so we were perfectly on pace.

The crowds were pretty good, better than other Scotia's I've done. I really like the start of this race compared with the pre-2012 versions when we were going east then under the Gardiner. One homeless man tried to give me a fist-bump at one point, which I avoided by swerving. Sam thought that I was hilarious.

5K-10K
Down Bathurst, across Fort York and on to the Lakeshore, we went. It was a perfect morning and I was getting a good feel for the pace. I was trying to go 5:01s, mostly hitting the pace. I took a gel at 8K, reminding myself to fuel properly, but I knew early in the race that I'd have no problem with the pace.

For most of the race so far, Nicole and Sam were on my right, just on my side. They were working well, and I was making sure I was listening to their effort level. Another runner joined us when he found we were doing 1:45. At the waterstops, they took a the liquids while walking, so I kept a steady pace and let them catch up to me at their own pace. At around the 10K mark, on a mini uphill Nicole fought her way back to us and I could hear her breathing. Within a few minutes, she told us to go, and I knew she had dropped back. I kept silent, and was just hoping that Sam could hold it together.

11K-15K
Sam took her time to catch up with me after a water stop. I was glad she did because it does take a lot of work to catch up to a pace group. We reached the turnaround part at the bottom of High Park, and I saw a friend of mine, we looped and headed back home. "Single digits," Sam said as we hit the 11K mark. I later saw my buddy Lee (who had run Chicago with me last week) and Peter, both were at the 13K water station. We had a slight tailwind and the weather was near perfect.

16K-19K
Of course, this being my home trail, I knew every bump, including the mini hill at 16K. I told Sam that it was a small hill, use the same effort, but lower the pace. I consciously tried to lower the pace so we never pushed our cardio -- last thing I needed was this hill to redline Sam. We emerged the crest in good condition, and continued to pound it out. I took a few action shots at this point, capturing Sam in the process.

I was also looking at my watch carefully. While a 4:58 was what we needed for 1:45 flat, I was planning to give Sam a few 5:03-5:06s so she could recover. I figured that I could give her a few seconds here and there and still get her in 1:45:xx. I knew she was working hard so I adjusted the pace so keep her comfortable. I knew we had a few more hills in us yet, and we'd have to save some energy for the last 2-3K.

We hit past Bathurst and I knew that little hill near the Rogers Centre would be coming. Fearing I'd lose Sam, I continued the pace but she fought back and caught up to me. Great job!

20-21.1K
Under the Gardiner for a bit, I thought we had a good chance to get 1:45. We split from the half marathoners and headed up Bay Street. I had asked Nicole earlier what tempo paces they train at and she told me 4:40, so I had this thought that maybe we could push to a faster than 5 minute final kilometres if we needed to.

We hit Front street and while I was hoping for that push, Sam told me to go ahead. I thought about urging her to fight it and to push on, but I knew she had fought countless times in the past 10K, so I went ahead, trying to be that bunny in the distance. I didn't really look back, but I let the final distance markers come. When I reached 400 metres, I started to increase the pace, figuring if she was behind me, it'd give her impetus to push. Plus, I wanted to make sure I finished in a solid 1:45:xx.

I don't have the final splits -- my Garmin went wonky, but I strode hard into the finish.

Sam and I took a post-race photo and we met up with Nicole after. Great job team! You're going to get that 1:45 soon! 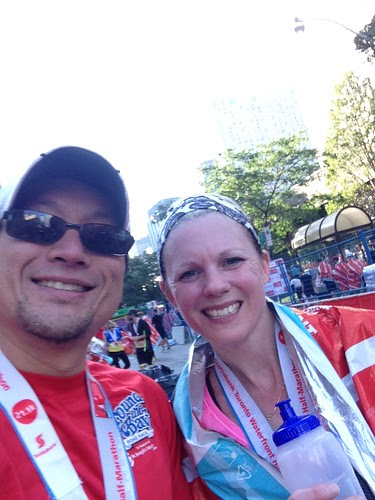 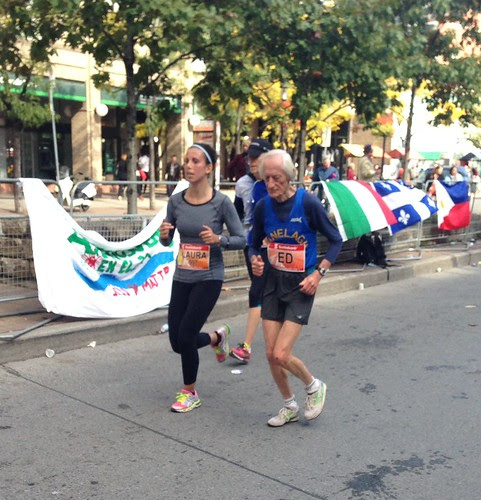 Is this you Kenny?

Nope, that's Fran (http://www.dailymile.com/people/frankis5/) @frankis. He was the 10:1 pacer. I was the unofficial pacer for two friends.

Nice work out there Kenny! So soon after Chicago too...well done.

Thanks again so much Kenny! You were perfect of course and we were glad to give you a focus. I'm only sorry I couldn't keep up for more of the race. The fist bump and the dude yelling, "Kenny! A whole lotta soles! MAN!" will be highlights for me for a while. Love the way you calmly kept updating us as to where we were. Enjoy NYC!

Hi Kenny. Big fan. We met briefly before the SL10K. Congratulations on your Chicago race. I was watching the SWTM on Sunday and one of the highlights was seeing you run with your group by the iron-gate bridge at the base of Bathurst. I’ll be running through the Winter and looking forward to crossing paths on a training run sometime. Best wishes for NYC marathon.

Thanks everyone. And Thanks runKMC -- I remember you now! Thanks for cheering.