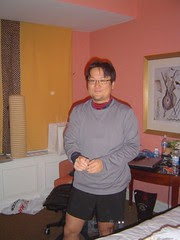 DSC04956
Originally uploaded by yumkerun.
Sorry you guys have to read a long ass report that's not even a recount of the race, but I have time here sitting at the airport lounge waiting for my flight. So I apologize, this is for my records, so bear with me.

We had a nice group dinner with me, R., Jelly and Cman, Frankie and his father and brother who flew into Chicago just to see him run. We picked the Rosebud in the theatre district and it was packed to the point that they set up seating in the lobby. Us three runners all picked pasta dishes and ordered water with our dishes. It was a funny crowd, roughly two-thirds of them were runners, in their windbreakers and sneakers, the other half the pre-theatre dinner crowd. Frankie's family was very generous and picked up the tab. After dinner, we exchanged hugs just in case we didn't meet up at the Trophy Tent (more on that later), we went our separate ways.

Now, the big debate was the weather. I was ready to go with short sleeves, but after monitoring the forecasts, I changed my mind. It would be about 3 degrees C (40ish F).

The night before was all ritual. I decided to go with my Saucony long sleeve, a technical shirt that's fairly form fitting but a pretty thin one at that. Pinned my bib, attached the chip, laid out the runners, the shorts, the top, and packed my gear tote bag.

I slept relatively well overnight and got up early morning to eat a bagel with peanut butter, but didn't really feel like a banana.

At 5:30, I was up and in the shower. 40 minutes later, said goodbye to R. with a kiss and a hug, and headed out there with my winter jacket on and my throw-away tech layer.

In the lobby of my hotel, there were about two dozen runners getting ready to depart. I hit the streets alone, but about 10 minutes later, as I was approaching Michigan (the main street alongside the starting line), I saw an amazing sight. A long, long line of runners, slowly walking down the street. It was dark out, and there we were. Hundreds, and later, thousands.

I checked into the Trophy Tent, for which Frankie, Jelly and I paid $25 each. It was bliss. A private check-in area, breakkie (I wasn't hungry), our own line of portapotties and, most importantly, it was heated. I didn't bump into Frankie and Jelly.

And at 7:10, I walked out there, and joined the massive crowds, heading to the start line. I followed the green balloons, and was wondering how I would keep warm for the next 50 minutes, let alone the four hours after that.

I entered the area at 7:30 and started to eye the other runners. They were definately serious folk. A lot were focused, some were warming up, others were just conserving energy by sitting on the roadside curb, bunching up for warmth. I joined the sideline for about 10 minutes.

This was my final time to decide. Should I go with the 3:20s, or stick back. I stationed myself with the 3:20s, and we just stood there. The crowd grew, and we started to be packed in there, which was a good windshield.

Then they played the national anthem, and with 5 minutes to go, since my hat was off, I took off the technical warmup shirt, tied it into a ball, and threw it to the side, successfully. Unfortunately, other people didn't have the throwing range and people were getting hit.

The siren went off, we cheered, and the biggest race of my life was under way... 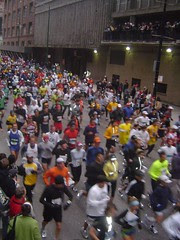 I've been away from a computer all weekend, just read all your blogs since Friday...nice photos.

Awesome job on the marathon!

Wow! SO MANY PEOPLE! That's crazy! I can't even imagine how pumped you were!!!

Can't wait to read the rest!

Hey were you guys staying at the Allegro? I'm sitting in my hotel room right now and staring at that exact same picture on my wall and using that exact same too-small-to-work-on desk?

Thanks guys, i'm writing the race report slowly and will have it soon.. love reading yours!

Sonia, it was huge, the fan support.. couldn't hve done it without them.

Arcaner, wow, we were in the same hotel! (actually, me and my girlfriend were staying there, frankie and jelly were at separate hotels). too bad, we could have met!

I mean, do I have to repeat myself? Yumke, you are my running inspiration. I remember my first run with you -- was it last year?, a 10K around town. Look how far we've come. I am so proud to have shared this whole journey with you. You were my coach, a fan, and most importantly my friend throughout, believing in me from start to finish.