We've all had the pre-race scramble - forgetting to pack our favourite shorts, top or whatever we need on race day to make us feel comfortable.

Before leaving for DC for the Marine Corps Marathon, I do remember distinctly packing my Garmin 405 charging clip in my bag a few days ago. After emptying my bags a few times, I think I lost it at the airport or on the plane.

I checked the power left on my Garmin a few hours ago -- it read 61%, which left very little room for error. Maybe it'd make it to the 20 mile mark then it'd conk out. What if I didn't have the charger and i'll have a dead Garmin for the next few weeks.

I called a few running stores, including the Georgetown Running Company. We were going to go to the area for lunch so I checked. The guy said to come by and they'd figure something out if they could.

On our way over, we stopped by City Sports, where I had to wrangle a staffer in a near empty store to peer down at the Garmin case. He really didn't even care what I was looking for. "Do you see it there?" he asked after I tried to describe the charging clip. No go. 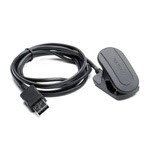 I stated scheming about ways I'd get it to last longer (turn it on right before race start and pray seemed the only thing to do).

Later, after lunch, I wandered into the smaller Georgetown Running Company, which today was filled to the brim with marathoners from overseas looking to buy a lot of shoes. I explained to one guy, I think the owner or manager, my plight. He had about 10 customers to help out and probably was in no mood to do special requests.

A sympathetic look. "Give me five minutes."

And now my Garmin is inching its way back to a 100% charge and this runner is very pleased.
Posted by yumke at 3:29 PM

Glad it worked out (but as I was reading part of me thought I would be cool if you ran the race without the Garmin and by feel). Go for four hours plus so you can be one of the "plodders" described in the NYT piece!

very cool that he was able to help you out! glad you checked out the the battery life ahead of time! Good luck tomorrow :)