I finished my 11K run today and the enormity hit me. For the first time, it dawned on me what walking that route meant to me. The right song hit on my iPod, I lowered my head and amazingly, had an unexpected moment.

The last few kilometres of my run today was on a well beaten path for me, I realized that. With the exception of a few races that I've run in this city, or runs started at my parents place, every one of about 1000 runs I've done have started and ended outside my front door. 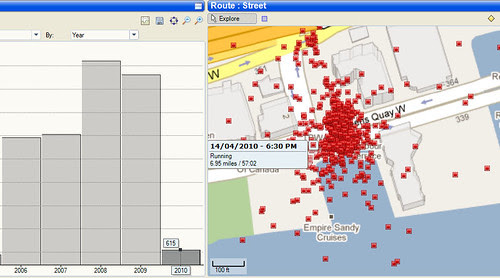 Where I live shaped the runner in me. I look out my balcony and I'll usually see a runner, day or night, fair or stormy weather. Living waterside in this city means you live in the path of many a cyclist or runner. Live here long enough, and you feel the urge to be outside.

Years ago, I put on a pair of old cross trainers, so unworthy of pavement that it had blotches of paint on it after I used it while renovating my condo. Put on a pair of joggers, some ill-fitting shell, and headed out for a run around the neighbourhood. I was doing a lot of inside workouts on a stationary bike, but something was urging me outside.

I finished that first run, a good 5K later, and survived and was exhilarated. Within a few weeks, I was running outside all the time. Within a month, I purchased my first real pair of trainers. And in a season, I was hitting the trails in the dead of winter. During one of those runs, I encountered a runner who asked what I was doing running in the middle of a snowstorm. "I'm going 8K today," I said, "what about you"? He said matter of factly, "I'm training for Boston." It was just the two of us on the trail that day and I was floored by the distance he was going.

Of course, there's been a lot of fast forward, you see some of my progression as a distance runner on this blog, but what you don't see is that I start and end my runs in one place. The routine is now set. I bound down the hallway and wait for the ride down the elevator and out the front doors to tune in my Garmin to the sky while testing the air. Chilly, warm, I relish those moments as I begin my run, where sometimes hours later, I come back beaming, sweating, limping, exhausted but refreshed, and wave hello to the rotating cast of concierge staff who all doubtless knows about my devotion to running.

Tonight, I ran the boardwalk that marks the final 400 metres of most of my runs. I passed by a slab of concrete that if you were new to the neighbourhood would be nothing more than a place to sit on. But run long enough in one area, and even the street furniture has a story to tell. I remember in 2006 to mark my birthday I ran my age in kilometres and ended the run by jumping on to the bench (and blogged about it). Been here so long that every corner, every post has a memory attached to it. I finished my run next to the bench, bent down to touch it because it seemed like a moment I wanted to mark, then decided to punctuate it by punching it with an emphatic fist.

Colleagues and friends have been wishing me well on my trip to Boston the past few days. Like I wrote about before, they know this is a big one. And so do I. Yes, it means a lot.

Finishing the 11.2K, I walked down the rest of the boardwalk, past some photographers taking pictures of a model trying to exit a fire boat that's been docked there for years, part of the scenery. I turned the corner and looked over the water where I've seen the sun rise. I turned the corner, looked up and saw my building and realized that this was the last run I'd do in Toronto, in front of my home, before I was to head to Boston.

That dawned on me. My. Last. Run. Before. Boston. This is where this all started. Every run starts and finishes here. Choked. The tears came down, ones that never emerged when I crossed the finish line last October. I was a little perturbed to be having this emotional moment while neighbours and tourists were walking around me, so I put my head down, the bill of my cap shielding my eyes from view. Not ashamed in the end, but happy and proud. 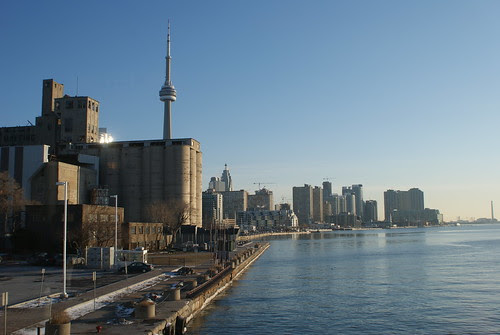 This view, above, is one of my neighbourhood I took a while back while crossing the ferry to the island airport. I remember thinking how gorgeous the view was and wanted to capture it.

Friday's predawn morning will be dark when I cross to catch my flight. I'll have no need of a sunrise to show me what that view looks like. It's home, I've seen it a thousand times, my feet have travelled it countless times, can't count the strides.
Posted by yumke at 11:26 PM

Delurking to say that this is an awesome post. Best of luck in Boston!

This is a beautiful moving post. Thank you so much for sharing and best of luck at Boston!

This is my favourite post. Thank you so much for sharing it. Wishing you well Monday and looking forward to your recap.

Have an amazing time in Boston, your reward for such hard work!!! Great post :)

What a poignant post! I'm glad you had your emotional moment... you've earned those overwhelming feelings, and it all comes down to this!

Have a safe trip and a wonderful time in Boston. Enjoy every step of that 26.2 miles... I know you will. I'll be tracking!

What Marlene said! PLEASE ENJOY IT! You've earned it.

Thanks so much guys, this is a piece that I knew I wanted to capture. Thanks for the best wishes and I'll be keeping you guys up to date from Boston!