Race report: Around the Bay

They never said long-distance racing is easy. Proved that was the case last week. Ran my third straight edition of the Around the Bay last Sunday. Spent the night at the host hotel, which meant the third consecutive "Earth Hour" hanging out in a hotel. Was in bed early. Up to have my bagel breakfast then back to bed.

The weather was just about ideal for racing. It was not raining unlike last year, the wind relatively behaving itself and the sun looked like it could come out. I set my goal at 2:15 and did a little bit of warming up and the legs felt pretty good.

At the start line, met another runner who recognized me from the blog. He's also going to Boston. We were set for the same pace, about 4:30 kilometres or 7:15 miles.

By the way, had the greatest bib number. Only a few fellow runners spotted it. 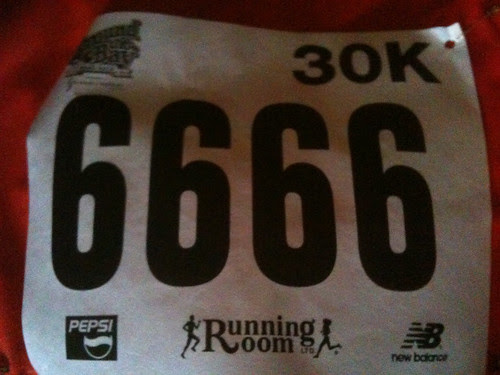 The race was off and I set myself to try to hit pace without going out too hard. Wanted to make sure it went off easy.

First 10K
I started off pretty good, even though a lot of runners were being sucked into a faster pace I tried to keep it together. I had been feeling a little tenderness in my right knee so I was testing it out to make sure it was okay -- was fine. After a few kilometres, I put in a slower than planned 3rd at 4:42. At that point, I was a little worried that I would lose focus and fall behind so I made a conscious effort at going out a little harder.

Luckily I was able to regain my form and keep powering through the splits. It felt really good but not easy to get through this race pace. I haven't been really training for this pace this winter, but it was my old BQ pace so I am familiar with the speed. I guess my body was thinking "okay, fine, here we go again"

Kilometres 6 - 10 were ho hum, just making our way out of the main part of the Hamilton course. I have to say that the first 8 are not my favourites. Kinda boring but at least it's flat.

The final few kilometres before the 10K mark you start to head away from Hamilton and the pace increased (you see me putting in 4:23s and 4:25s). I think I was trying to make up for a few slower seconds and I knew that I wanted to hit the goal time according to gun time so I had to hit 45 minutes.

The 10K mark was the first relay zone, I get so jealous of those who run the shorter distances. Hit the 10K crazily right on target.

Second 10K
The second 10K was one where you can make some time. It's relatively flat with a few rolling hills. It can also be hit with wind. On race day, it was near perfect. The packs had thinned out by now and I was getting into a bit of a racing form. In retrospect, it may have been premature to start emptying some of the tank but I was feeling okay. I kinda also wish I had brought another gel with me (I only took two) but I think if there was something that broke me it could have been this aggressive second 10K

And you can see how I was clearly going a lot faster than pace with the next five. What the hell was I thinking? I wasn't really looking too much at my splits but I think I have to make sure I pay attention. I think I banked almost a minute by the time I hit the 20K mark, which is about the time that we hit the hills and the reason why this road race is so difficult.

Third 10K
From about 22 to 27K, the Around the Bay has some major hills. I like to think of them as one slower riser, a few bumpy ones, two big ones and a monster at the end.

I tackled all the hills in an aggressive fashion. Looking at the splits below I knew I was going out too hard. Even during one of the climbs, I could feel like I was going to hard. I wanted to have something left for the last 3 kilometres, because it was there a few years ago that I had so much left in the tank that I posted my fastest kilometres.

Yep, that's a big slow down and included a walk. At that point, I was just thinking that I had completed one of my goals for this race, which was to run 13 miles at a marathon type pace. In fact, I had done a good 16 miles at faster than marathon pace. I also felt cramping and also thought about Boston three weeks out. It was time, I thought, to "shut it down".

Even with that, I ran the race with an average pace of 4:40, a very good run. I'm sure if I started at 4:40 pace I probably would have killed the last three kilometres and come in with a faster finish but oh well.

Around the Bay will have to be a goal race next year. I know with proper ramp up and training, I can get the 2:15. I'll be back. 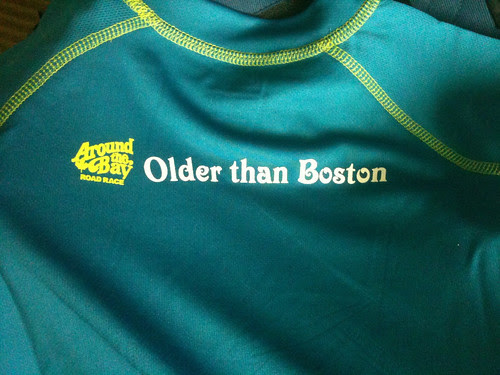 Great race and good attitude knowing that Boston is your big goal and that you actually hit your 13 mile goal. I'm in awe that you can run that fast anyway!

Hi I saw your blog. You have done a good job, I really liked your blog and very informative. I believe that many visitors will find it very useful to you