As race days go, on paper it was a perfect day. Weather had all the attributes of what most would call a beautiful day. For racing though, I was hopeful but worried that it would get a little too warm. Not that I have a lot to complain about: each one of my last marathons I have somehow avoided truly terrible weather. No downpours or terribly hot days, though my share of a little too warm for optimal racing.

One thing I chose wrong was my running top. I only brought one singlet with me and decided that it did not fit quite right. So i went with a t -shirt. Otherwise, while waiting in the corrals in the final minutes in the sun i knew it was warm

Started off the race right around on pace, nice job that I do not often do but am learning. Within a few kilometres, I knew it'd be a warm day, but I didn't try to stress out too much. The first bit of the race has a combo of flats, uphlils and downhills. I don't mind it and I find that the long stretch is nice for getting into your pace and letting the crowd sort itself off. One trouble about mixing marathons with halfs is you get fooled into thinking you want to go faster than you should. In any case, the first 5K were on pace. Luckily there was a 3:30 pacer who didn't seemed to be going out too fast, so I kept them in sight.


The next five kilometres features a few turns and running through the U of T Mississauga campus. Last year, I took a portapotty break, which I did in kilometre 8. Yes, I always answer when nature calls, especially if you have an open portapotty or a little wait. Problem is with every second you lose on the break, you can quickly fall out of pace. Having lost 20 seconds or so, I exited and had a fast next kilometre (4:27). Before long with a little bit of effort and the benefit of a downhill, I eventually caught up to to pacer. I saw my friend who came on to cheer me and finished the 10K mark pretty much dead on pace..

The next bit chugged on, not much to write about, just trying to keep an easy pace. We lost the pacer for a bit when he took a pee break as well but I stuck to it and before long he was alongside us again.

11K - 15K
5:24
4:52
4:56
4:54
4:56
̈́
By the end of 14, we had split off from the half marathoners. I was really looking forward to this, seeing who was among me. It was still early on in the race yet it felt a little warmer than I'd want. I had a feeling that this wasn't the day to go all out. Fine, because I wasn't. I took my second gel at this point and soon after, I felt some discomfort in my stomach. Yep, I had to go. Won't spare details but you see my 17th kilometre included about a one-minute break. I felt I had to go while I had a chance at a portapotty and I'm glad I did. Of course, being a minute behind pace gave me a sense of urgency. Yes, I could have gone into the racing just going with 4:55s and I'd make up the minute over the second half, but I felt I wanted to run with a group going as fast as I wanted, if not a little faster. Which lead me to take the next 4 kilometres at around a 4:45 pace.

Caught up to the group of people running pace but somehow the pacer had gone missing. What the heck? I found the 3:30s a little spread out so I decided to just dictate my own pace. As I had done in so many marathons, I ran without a pace group and I was pretty comfortable with that. Hit the half marathon mark at 1:45:16 (looking back, that meant I ran a 1:45:38 second half).

They did a course change this year, and instead of going out to boonie industrial land, we turned back toward the city waterfront. In a way, it was an improvement but I wasn't happy what that would mean for me in about 10 kilometres or so. We were finally running in some shade and neighbourhoods so I appreciated that. I took an orange slice here and there and we had a downhill and a few uphills. Kinda hurt

I'm not a fan of running on Lakeshore, it was straight ahead but by no means flat, in fact it was hilly and had no shelter from the run. At least the marathon gets you to turn into some neighbourhoods. By this time I was feeling alright. I believe some runners were getting hit by the heat and walking, but I was doing okay. We turned into a street and a guy was watering his lawn. I shouted out "that looks great!" and he asked if I wanted some. I nodded and he sprayed us with water. So good. This part of the course had a few turns. You get a sense the course is designed to eat up miles by having you run back and forth. Yuck. Anyways, regardless, my splits show tonnes of consistency. Hit the 30K mark a little ahead of schedule and was feeling obviously tired but also that I could still go.

The problem about having run this course last year was that I knew the old course. While I was still at the 31K mark, in my head, this was where that last few kilometres were last year. Even better, there was the turnoff for the half marathon's 18K mark. So my head was not liking that. I shook my head off that and tried to ignore the heat that was setting in. I was really regretting not wearing my singlet. I actually ripped off my pace band because it was bothering me. Around the 34K mark, at a water station, I felt that I should take a water break and get my fluilds in. I knew it was a gamble. Many a walk break actually breaks marathoners. But I needed it.

After the walk break, I resumed pace, feeling a little better. I made sure to take my last gel. Sun was blazing, it was warm and I was sweating. If this had been a BQ day, I shudder to think what would happen. On the bright side, I did two miles after the walk break at pace. Kilometres 38 - 40 weren't pretty. My left calf started to cramp so I was forced to slow to a walk. I chomped on a Clif Shot Blok hoping it'd help me get rid of the cramp. I was able to get going again but was forced to walk again. I took four walk breaks and three of them I had to stretch out my calf. That helped (or maybe the Blox helped) and I started to run again.

With two klometers to go, I looked down at my watch and realized it was actually around 3:20 mark, which meant if I did a few 5 minute kilometres, I could meet my 3:30 goal. The walk breaks had cooled me down and the crowds were growing so I stepped her up and managed 41K at about pace. The last kilometre I just willed myself to run it in and it helped, was actually feeling pretty good by the last half mile and did 42K in 4:45. Hit the final stretched and saw that I could finish in sub 3:31 and did so with 6 seconds to spare. 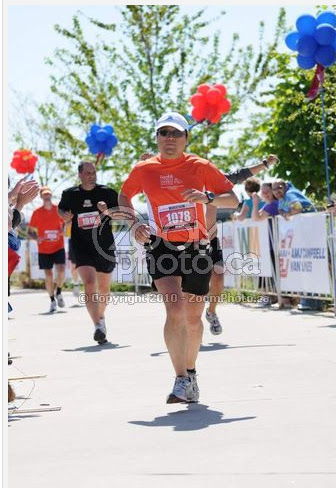 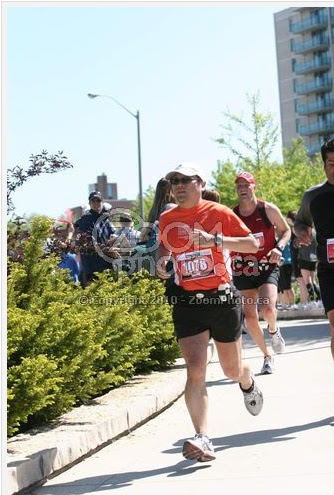 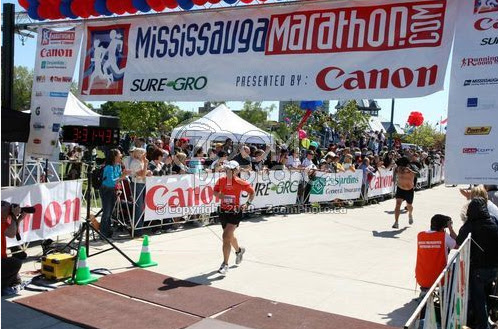 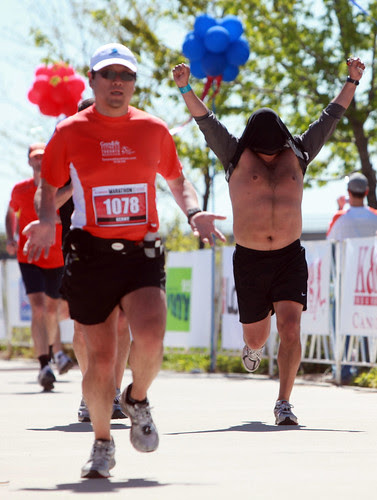 Really like the "Many a walk break actually breaks marathoners" comment. I've personally found that walk breaks are a 50/50 proposition for me. Sometimes they're just what I need, and sometimes they just seem to stall the engine and I never get it going again.

Great time considering the calf cramps you had to work through.

Excellent report - as always! It was definitely a warm day and that sun showed no mercy! I felt like it was burning through my brain. When will I be blessed with the PERFECT marathon conditions? Maybe Toronto.

You are a pacing machine and always impress me with your steady, even splits.

Nice work out there catching up. I find it tough to catch up when I get a bit behind but you came back and finished well. Good job & thanks for sharing!

Congrats on a great race!

Hello, I apologize for contacting you in this fashion, but I think you might be interested in
submitting your site to my new sports directory…at thesportszone.org

I'm assuming comments are moderated so when I click submit this post won't automatically appear on site, if it does, I again apologize.

Great report! Bummer about the calf though, I feel for ya.