Was flipping through my Runner's World and saw the marathon ad that some have been talking about.

Controversy aside, it reminded me that this weekend I should approach my 10th marathon the way I've done so many -- with a race plan in mind and to a degree run it not just for the challenge of completing it, but competing with myself. 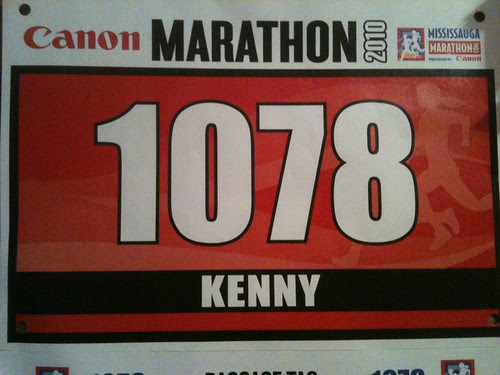 Even after nine marathons, I still approach every race of 42.2 kilometres with caution and respect. I have to eat properly, rest up, pack up for race day and contain the nerves for race day.

Before many a race, I've felt blah in the days before, but as friends say at the end of a marathon training program, 'the hay is in the barn' and you've done all your work. Time to cash in those pennies put away.

True, I just finished a 11 day stretch of work and in this week have only run twice, but I think that even so, I can look to Sunday's Mississauga Marathon with some hunger. I want to compete, even if that notion of competition is to better my time from Boston, which I ran for fun. I said that Mississauga was also for fun, but I'm thinking that any marathon, after the 18 or so mile mark, you have to start to dig deep. I plan on that.

Picked up my 3:30 band. I'll go out at that pace and see how it goes. And I've been told that there's one runner I should look at beating. I sure hope he's not a speedy one. Game on.
Posted by yumke at 9:18 PM

Have a good time! For some reason, I seem to recall thinking that Ben Mulroney was sorta slow. I think there was an article or something on him somewhere. You should have no problem beating him.

Thank you so much for this beautiful Article

Thank you for your wonderful efforts