And the city turns on its runners?

Leave it to a guy named Ford to run us off the roads. For the second year in a row, marathons are making news in this city. Last year, a few headlines and frustrated motorists resulted in Toronto forcing one of two fall marathons to move. While in the end it was probably a good idea to space out our two major marathons, what annoyed me and my fellow runners was this whole idea that roads are sacred ground, never to be touched by a sole.

This year, mayoral candidate Rob Ford tells us the morning after the Toronto Scotiabank Waterfront Marathon that he would, if elected next month, think about banning marathons from the city's roads. He even goes and suggests that we hold such races at places like High Park or Downsview.

So instead of just mouthing off against utter nonsense, I think there are a few good points to make.

Great cities embrace running: Can you name a big city anywhere? London, Berlin, Washington, D.C., Chicago? All of them host major marathons. In most of the big ones, marathon weekend is a major event. It brings out runners from all corners, but it also brings out the citizenry. I hear that the New York City Marathon is one of New York's finest days. Guess what? The race is run all over the city's boroughs. Boston? It's a holiday. Chicago? Hundreds of thousands come out to cheer in every neighbourhood. I was recently running in DC and I thought to myself as I saw a few hundred runners out on their weekend long run that "this is a runners' city". Toronto is on the cusp of being one. It really is. The half marathon I just ran had 4000 finishers in 2005. Yesterday? More than 9000. Great cities are places where people live and PLAY in and they support these events because they are what make the city a livable one. If we planned our cities around vehicles that use our roads as a way out to the suburbs, then what kind of city are we trying to build? It's too late, we have downtown brimmming with people, young people like the half dozen half marathoners I saw coming into my elevator yesterday afternoon. Embrace running and you can do no wrong. 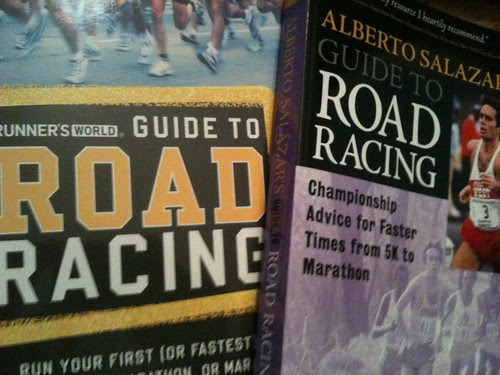 Road racing is made for, well, roads: We all hear about the first days of the New York City Marathon, when it was run as loops in Central Park. (Those roads are big by Toronto Standards and yes they are actual roads.) To suggest that marathons should be run in parks goes against the whole idea of the sport. Park and dirt, they call that cross country? Sprint and short distance, they do that on the track. My sport, it's all about the roads. (Don't make me use that I'm a taxpayer... oh wait.)

Note that it can support 2000 runners at a time. Note a loop of it can barely get you 3 miles if you are lucky. Note that marathons has about 15,000 - 20,000 runners. Note that it's impossible and stupidly hilly.

Road issues are caused by so much more than a Sunday road race: For every race that's run on our roads, there are as many street festivals and parades that make our city great but still cause traffic chaos. And if you wanted to ban something annoying that ties up traffic, how about all the cars that come into our club district from the suburbs every Thursday to Saturday. They're clogging up my roads. How about banning fans from parking around my neighbourhood to go see the Jays game. Unreasonable? Yep, just as unreasonable as banning our races.

The best part of all of this? The last fall Toronto Goodlife Marathon is a week before the city election. Running becomes an election issue, for all the wrong reasons. Rob Ford is running for something, just not for the votes of anyone who reads this blog.
Posted by yumke at 8:39 PM

Thanks for pointing this out as I had missed it. You make a ton of good points. I think this could mushroom into a game changing issue.

That is just too bad. This looks like short sightedness. This mayoral candidate must have heard about the traffic and thought of an easy way to get rid of it without fully getting up to speed with the issues.

I agree that races make a city more livable and fun. Moving to parks would mean some races would disappear and the big races would probably end up damaging the parks that were not designed to handle this many visitors and stomping.

The more Ford talks..the more angry he makes me and he won't even be 'my' mayor.
Why decry something that brings in $$ to the City, tourism, promotes a healthy lifestyle etc.
...he didn't even know the race was going on....get to know your city....

It also seemed to me that this year there were more spectators out there and that they were more enthusiastic. it's ridiculous-Word on the Street closed a core area the entire weekend and the running event closed another area for a much shorter period of time-by the time most people finished the half many Torontonians were still in bed!

I heard about this yesterday... sad, sad, sad.

I don't live there, but I would think the city the size of Toronto would be able to cope with these kinds of events!!!

Maybe it'll win him a few votes, but hopefully not enough.

Traffic was a mess. Blame the marathon. Dont blame the event at queens park going on at the same time making college a no go. Also dont blame the road construction fiasco on bloor from avenue rd to young. You know the road constuction that has been going on for 2 years.

Please cancel these events as well

This cirt is full of idiots, sadly most of them seem to run for office or are already there...

Well written. It's hard to believe what came out of his mouth on this issue!

Great post. Hopefully, the citizens of Toronto will not support these crazy ideas.

I live near Washington, DC, where the public transit is pretty good and people don't seem to get too miffed about Marine Corps. However, it's also a city where streets are shut down constantly for motorcades, demonstrations, parades, etc, so it's almost like you expect roads to be closed all the time. lol.

Baltimore, however... Much of the same mentality as Toronto. When I was running it, we had people trying to illegally cross the course with their cars, almost taking out runners in the process. Yikes!

Thanks for the post. This Ford guy is definitely not looking long term. You're right - all the major cities embrace their races. I'm from little old Victoria, and our annual marathon is a huge event for us. Races like this bring in tons of revenue...and sure...some people are inconvenienced. But it's a day! Surely that's worth the spinoff in terms of health, tourism dollars, etc.?