The half marathon, I've read, is one of the fastest growing race distances, popular because it is attainable and a fantastic achievement. I got hooked on distance running through half marathons. I still love them because -- well, they are like the gateway drugs to marathoning. Do a half, and you learn about speed and endurance and longer distances are possible. 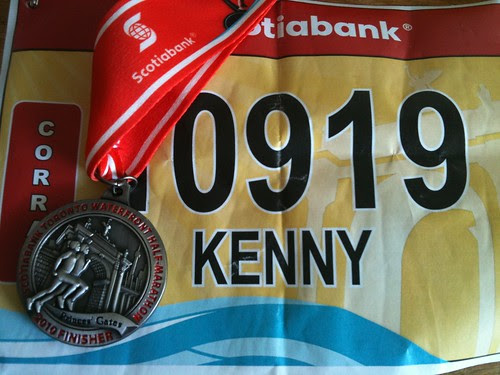 My marathoning obsession has put the half into another category. Not sad to say it, but I usually think of them as catered training runs -- a good way to get marathon pace for more than 10 miles or tempo for more than six miles. Looking back, I actually didn’t run a half marathon in all of 2008 (which is odd, cause I average around eight to 12 races a year.

I recall fondly the one time I put the hammer down. I created a race plan, I stuck to it, and I gave it all. The result, a huge PB (1:31:33) that I know I can match but I’ve never come close to it. It was three years ago!

Scotia is on my annual race calendar though. Including today, I've run the last six editions, five halfs and one full. The Scotia half was my very first half.

Today was my last long run before the taper. I felt it was important to not jeopardize the mileage so I would run a warmup, do the half, then warm down. That made me a little conservative, but that’s fine, again, the half mary is the appetizer: Marathon season is the main.

I did treat my last 20 mile day like a marathon day. I did a mini taper (a few days off running -- only a 2 miler on Saturday), I carbed up and I rested. Everything was going well until I realized as I as putting on my shoes that I put my chip on my new Asics GT2150s, not my newish and 60 mile Asics 1150s. After a quick save, I was out the door for a warmup jog to the race site.

I found myself at one of the front corrals when I bumped into a friend of mine, a great short distance runner who was going for his first half (he was rock star as usual, hitting a 1:33 on his debut.) I lined up just behind the 3:10 pace group and minutes before the start, I ditched my sweater and relished the cool breeze. This, the humid marathon, was finally getting a cool day. Awesome.

We ran south, slightly downhill, and I ran by feel, not looking down at my watch much. It was only a while later did I realize that I started faster than the 3:10 group (which would pace for a 1:35 half). The first bit wasn’t too bad. Not too many slower runners made their way to the front in the coloured corral system so it spread out pretty quickly.

The first two kilometres were run in about a 4:40 pace, I’d probably got bad splits from the office buildings that were interfering with the Garmin. I was glad to have my singlet on because although it was cool, the sun was out, enough to create a little warmth. I hate heat.

By this point, we were under the expressway. The 3:10 group came alongside me and I chatted with an ex-coworker who was running the marathon. I told him I was going easier, and saw that their pacer was going out strong to make some time. I thought about hooking on to go for 1:35 but it didn’t feel right. The pace I was going at was fast enough for me.

A little while later, at a water stop, I heard a volunteer yell “go 3:15s” at my general direction and what do you know the 3:15s came creeping up at me. It was time to choose.

I let the 3:15s go a little ahead, thinking they were going a little aggressive (see the splits, they should have been going at 4:37 kilometres). Then a competitive side of me kicked in. What the hell, I thought, lets stick with this group. This was my marathon pace a year ago and at the very least I can aim at a 1:37ish half. I started to pace with the group. It felt good to run strong again, I hadn’t done that in awhile.

The next five kilometres were textbook running with the pacer. We were probably going a little fast, but when I looked at my splits (I had a 3:15 pace band on me), we were about 20 seconds fast, not too bad. I was worried that this pace was feeling ‘hard’ and that was a bad realization to come to, but a minutes later, my heart and legs kicked back into memory. Oh yeah, that’s what it feels like to run at pace. Glad I did some strong running in the past month.

We saw the lead runners of the half and full coming back from the turnaround. I love this about the waterfront course. I took my first gel around the 40 minute mark (I didn’t take my next one until after the race, when I was prepping for my last 6 miles of my 20). In general, I was hitting all the water stops, taking in Gatorade. Our pace group was going well, swallowing up runners here and there, but I saw something ahead: A mass of runners strung out ahead of me. All of a sudden, I got hungry. I felt comfortable pacing, but I felt I had a lot more to give. Before we hit the next water stop, I ran ahead of the pace group, grabbed my drink, and started racing.

Racing on this course is actually a lot of fun. You have a lot of long stretches where you can see half a kilometre ahead of you. You can also look across to see the runners way ahead of you on their way back from a turnaround. I also saw the 3:10s on their way back. You know what they looked like to me? Targets.

So I raised the tempo, just a tad at first, then to a nice little cadence that was never satisfied with running beside someone I had just pulled alongside with. I immediately looked ahead.

That was the next five kilometres, solid running, keeping to shade, getting my Gatorade, pulling alongside, and passing. Felt great and I knew that I had no excuses for running hard. The weather was cooperating, even with the sun in our eyes.

We were nearing the point where the marathoners and half marathoners split, and the 3:10s were 100 metres away from me. Within a kilometre, I had come alongside them. As usual, I wished them and their pacer well. “Happy hunting, marathoners,” I shouted. “Save us a beer at the finish” the 3:10 pacer said. Ha, I said, and as they turned right, I turned it on for the final kilometres.

More running, didn’t lose much pace, but it was funny cause I was running alone, targetting runners ahead of me. I caught a lot of runners in the last 12K.

The next two splits are baffling, beause of running under expressway and being under office buildings. I’m doing the math and saying that I averaged 4:20s or faster the last bit.

Some people hate the last kilometre of the race, it’s slightly uphill. I blew up in that stretch in 2008 when my BQ attempt when awry on a hot day in the same race. But today, I loved it, mostly because of the support we got in the final 800 metres. So much so that every time a person called my name (on my bib), I’d find it in me to go a bit faster. I stepped it up even more in the final 300 metres, and saw that the clock was still under 1:35! With my delayed start, that meant I was in for a 1:34 and change. Nice! I sprinted down the final metres and made it under the wire for a clock time of 1:34:59 or 1:34:27. (Full results)

This was a race to be proud of. Once I turned it on, I never looked back. Also, I managed to log my second fastest half! Most of my times are in the 1:35 range as that was my marathon paces.
Posted by yumke at 6:49 PM

I didn't know you were running the half today :)

The race seems so interesting and challenging. The event is tough and looks everyone is happy to it. Good post too.

Well done Kenny! Congrats on a strong half as part of a longer training run. I decided to forego the extra mileage and give it all I had for the half instead. I believe I've put in enough long distance for Goodlife.

I had a terrible Garmin signal... my last two K's recorded at sub-4:00 which is not remotely possible.

When I did the Scotia full a couple years ago I got absolutely no reception over the first couple kilos, and the last couple were super off as well. I mostly had to ignore my Garmin.

I remember kind of liking that kilo, even though it was uphill just for the kind of support there.

Good work in getting back on track!