Runners, I've concluded, are a little bit of the driven, obsessive type. I think I knew that, but in the early days, I thought it was just me.

Not just me, as I was making my way through the latest Runner's World, about a 54-year-old woman who'd run 30 editions of the Twin Cities Marathon. She'd book the day off six months in advance, had run through a marathon with an arm in a cast and a fractured pelvis. Her aim, she says, would be to run her 50th when she's 75!

We've heard about running streakers, the types of guys who run every day, screw rest days. Some have quite amazing streaks that count the number of days that stretch into the thousands. I thought that was a little extreme until one of my friends, on a drunken night, told me while we were drinking at a bar that a colleague of his was drinking at the same bar, and realized that he had to fulfill his 'run at least a mile every day for a year' streak. So he ran around the block in his work clothes and resumed drinking. I think this person is a reader of this blog and would love confirmation!

This type of obsessiveness, striving to reach some sort of record that you can really only boast to yourself (or to a magazine if you reach a significant milestone) is a little crazy. Who other than another runner would really appreciate the streak? I forced myself on runs to hit a streak, and they tend to sneak up on you, like this summer when I realized I racked up 18 days in a row of running. Quite a streak, but I decided to end that one quickly and quietly (I like rest.)

In the last few days, I've been getting emails from the Boston, London, Chicago, Toronto and Marine Corps Marathons. Register. Remember to pick up your E-Card. The lottery is coming. Blah blah blah, then I realized that maybe I'm a little obsessive. Yes, I'm running three marathons in October, even thought about adding a fourth so I could hit another running streak. The Marathon Maniacs are official record keepers of long-distance streakers, yes.

The Marine Corps Marathon is famous for many reasons, but they also have a select group of veteran runners who've run every edition of the the race. They're called Ground Pounders

My own mini streaks are starting. There are quite a few races I've done over and over again. MCM is one of them, I'm going to run my fifth this October. I won't lie, the streak is an allure. 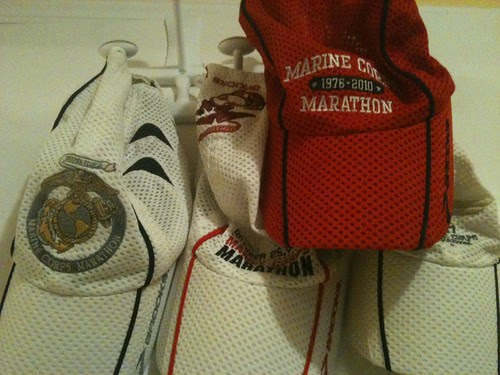 I didn't think I was into running streaks until I saw my name added to the Runners' Participation Recognition list for the Around the Bay 30K race. This year was my 5th ATB30K race in a row. Can't wait for #6 next year.

I ran my 20th Boilermaker this year thinking I'd be content to stop the streak and am I? No. I'm just thinking of how far I can take it. Because I started running that race at 12, I could conceivably run 50 of them.

So how far you going to go with the MCM streak? ;)