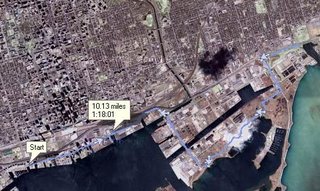 Today, I thought back to the commitment I made in January when I decided to sign up for Chicago. Back then, in the wintery weather, it was a happy-go-lucky decision. I knew it'd be tough, but October was so far away. I knew the mileage would creep up, the hours on the road would steadily increase and the time for other things would slip away.

And as winter turned to spring, I boosted my weekly mileage, starting looking to a half marathon race, a 10K. But it still wasn't anything compared to what effort and commitment -- and sacrafice -- that I would have to take over the course of this training program.

And then on June 19, the program started. By that point, in almost six months of running, I had logged 1,050K, no small mileage for an average runner. But then the program came into effect and I was staring at a schedule that had me running 6 days out of seven. From running four hours a week, I am now facing up to 7 or 8 hours on the road a week, not counting prep, warmup, etc.

In three months since, I've logged 900 kilometres and I have to say -- shudder the thought -- that each run has been easy and hard. Easy to get out the door, hard to maintain fast pace. Easy to wind down a run, hard to get the limbs going. Easy in the middle of a sorta-long run, hard at the beginning of a recovery run after a Sunday long jaunt.

And it's also hard because, simply, this marathon training business is a grind. It wears you out, it monopolizes your time. People may think you're crazy and your fit, when in fact you're sometimes scared of running in crappy weather and you just ate a hamburger three hours ago so you feel nowhere near trim and lean. You say 'i ran 30K yesterday' to someone and some will say 'holy cow' and others just can't imagine how long that distance is. Let me tell you, it's far. Actually, sometimes far is an understatement.

Weekends are not time for rest, but time to strengthen your body by breaking it down. Sometimes, during the middle of the long run, I start daydreaming what it would be like to have more time to hang out and drink beers, to stay up well past midnight, to take two or three days in a row off exercise. To sleep in on a Saturday or Sunday morning. Best keep that as a carrot for the end of this journey, 36 days from now, when a commitment made in January can be considered kept.

This weekend is supposed to be 16K (10 miles) at pace and 32K (20 miles) at LSD. Part of me wanted to get the easy part over. Guess which one that was? Yep, the 20 miler. I've been dreading pace runs, they are just too hard sometimes to maintain the focus you need to run race pace when you're running by yourself. 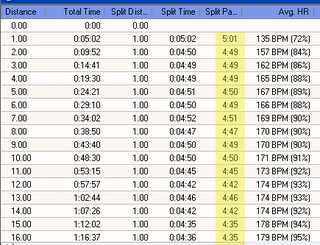