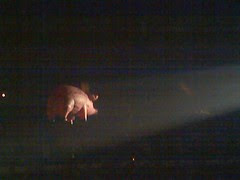 0920rw3
Originally uploaded by yumkerun.
I have to follow. My excuse for not running today could have been because I'm doing a mini taper for the race this Sunday.

But no, it wasn't. My brother surprised me a few days ago by telling me he got us tickets to see Roger Waters (of Pink Floyd fame) live in the flesh in Toronto. It's his Dark Side of the Moon tour which means he plays that amazing performance straight, from heart beat to heart beat.

Best part, we were stationed about 25 metres from the stage, which means I got to scream my head off and sing songs like Comfortably Numb ("When I was a child, I had a fleeting glimpse, out of the corner of my eye") while the freaking guy who wrote those songs was singing back in my direction.

Okay, another dream come true. (I saw Roger in 1999 and the Gilmour-led Floyd a year or so before that).

Roger, for me, is a God. I love him, his wacky political ideas (I usually agree) and his lyrics, even the recent ones that escape most people's attention span. He wrote a song about Beirut that went right after Tony Blair and George W., which pleased the Canadian crowd and was highlighted by the flying pig that soared above us with random messages on it.

Confession. I'm a reformed Floyd addict, which is to say I've listened to all their albums and solo works for years, then put them away about 10 years ago. Doesn't mean I still don't love the guys.

So, in a long and winding post, that's my excuse for not running. (And for you random Floyd fans out there, my brother promises me he'll post the videos he took up on Youtube.. it'll be good watching.)

Back to your regularily scheduled running blog.

that photo is too funny!

It was awesome.. the pig was too funny.. See more about what was written on it