Eclipsed by the eclipse

I had one of those moments this morning, sort of an after-the-fact duh moment.

As I was going to bed, I noticed how the moon was shining brightly, lighting up Lake Ontario that my balcony provides a wicked view. I mentioned it to R. over the phone. She notes she didn't see a full moon in DC as her balcony looks over an alleyway (which, by chance, is the same alley that John Wilkes Booth escaped after killing Lincoln and fleeing the Ford Theater).

In Toronto, this is a shot of a full moon over the lake from my condo, taken about a month ago. 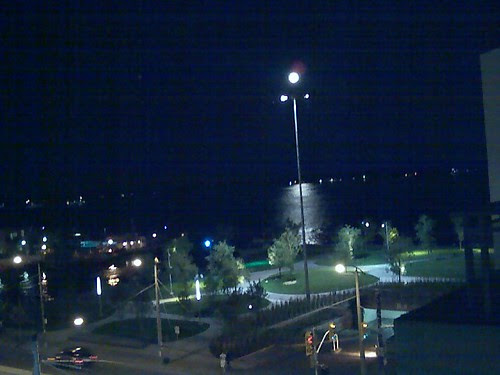 Fast forward to this morning, when I started my run, according to the Garmin, at 5:07 a.m. It was still dark. I ran westward. I remembered running down the mostly unlit path and I was finished the first mile, I noticed it was almost pitch black. About a mile later, I remember looking up at the moon a few times. I thought about how odd it was, it looked like there were clouds obscuring the top of the moon. Weird. Didn't think much of it but kept on checking it out once in awhile.

At work later this morning, I was catching up on the news when I read about this morning's lunar eclipse. This site says that the mid-eclipse (total eclipse) was at 6:37 a,m, after the sun had risen and I was back at home. When I completed the 'out' part of the 8 miles out-and-back, it was 5:35 a.m. According to this NASA site on the eclipse, it began at 4:51, just minutes before the run began. Which also meant that I was witnessing the eclipse in action. Cool (in retrospect).

So a nice run with lots to look at. To the west, a lunar eclipse.

And on the way back, a beautiful sunrise. 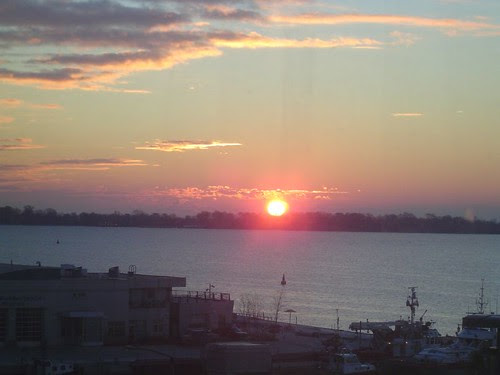 Add that to the reasons why I run.
Posted by yumke at 7:12 PM

I was hoping to see the lunar eclipse this morning on my run. I set my alarm for 5am, but didn't actually crawl out of bed until 6:15 or so and missed it. Good luck with the VO2max workout.