My friend Fitzy has talked about the 5K Moon in June for awhile. It's in Burlington, Ont., about an hour's drive from Toronto and also where both Fitzy and R are from. So Fitzy and I signed up for the 5K race a few weeks ago and I kinda crept up on us.

What also surprised us all is the heat wave that's hitting the Southern Ontario area. It reached a high of 33C today, about the same yesterday. I hate running in heat but at least this race started at 9 p.m. as the sun was setting.

Fitzy and his better half picked me up and we drove down there, picked up our bib and chip, and we enjoyed watching the 1K fun run for the kids. They were so cute and hilarious. Luckily, there was a breeze that cooled things slightly but it was still warm. I did a few striders around 8:30 and it felt a little hard: It was going to be hot. So my goal, fabricated just before the start, was to go out 'semi aggressively' or try for a 4 minute first kilometre or faster, and see how things would go. 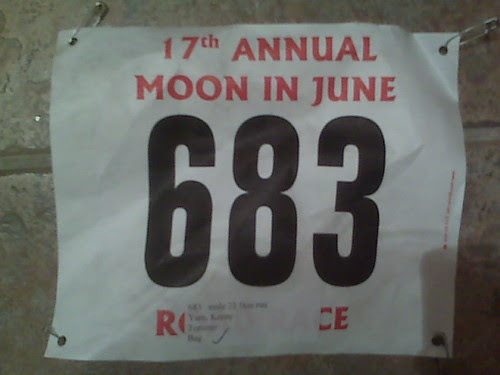 The race started near city hall, went south to the lake, then a series of corners, winding our way back to the start/finish line. While we were lining up, a overheard a few high schoolers (wearing school colours) talking about how they wanted to go sub 20 minutes.

Wow, once or twice? And here I am, having run more than 800 miles this year. Yikes.

The temperature at 9 p.m. was a cooler 25C but with a humidex of 31C. I lined up near the front and when the horn went off, we took off. I tried not to go out too fast (yeah, right) and we ran south and surprisingly, I found myself near the front. Just over 500 ran the race but I expected a few more fast runners as I saw some Toronto-based local runners warming up. 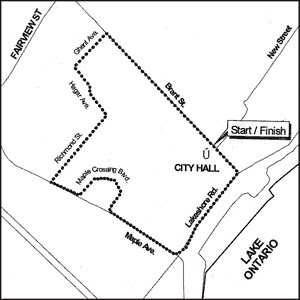 I hit the first kilometre in 3:50 and I was surprised that the effort didn't feel too bad. I was putting my breathing into check. It was at this point that I decided to give a race a go. I was running just behind a big group of 10 runners who were running in a cluster. I just kept with them for a bit, judging their pace and seeing if I could match them, which I did. We turned north and it felt great to have a breeze in my face.

The second kilometre was a slower 4:10 as I was just making sure I wouldn't lose too much speed. I started to push as other runners started to slow down their pace. I could tell a few of the runners had gone out too fast, so I targetted them first, catching up to them, then just running strongly by them. We ran through a neighbourhood and as we were about the half way mark near some houses, I heard a woman watching us saying that we were about the 23rd runner to pass. I sensed my opportunity and was pleased to see that I was still running sub 20 pace. Kilometre three was done in 4:01.

The next kilometre was interesting. The breeze had stopped and we were turning a few corners. I saw the two guys who were talking about going sub-20. I ran alongside them and passed them in a few seconds. I started bumping up my breathing patterns as it was getting laboured. The heat was getting to all of us but I knew I had to hang on. There were two runners ahead of me I was locking on to. A boy who was about 12 (he was in the 10-14 group) who was running very well, and a girl, who was in her early 20s. The boy went out really fast and the girl was running consistently ahead of me. She had a fast kilometre 2 so had about 200 metres on me.

I did the fourth kilometre in about 3:58, during which I passed the boy. I wanted to tell him he was doing great but I was myself getting kinda tired out. We did the final turn onto the main street and we had a kilometre to go. I really started to turn it on. I knew I was overheating but I sensed the finish line. I find it helpful during the last kilometre to just picture two or three laps of a track. It makes the distance feel so much shorter. I felt strong and I pumped my arms and increased my strides. I passed a guy, and was gaining on the girl. We all went into a near sprint in the last 200 metres. The guy who I passed came sprinting by me, all while I was trying to pass the girl, who had also stepped it up. In the end, I did the last kilometre at a 3:52ish pace and came ONE second behind the girl. (See three of us below) 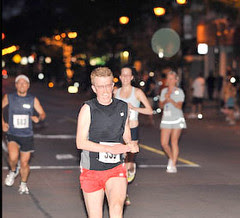 Now here's the interesting part. Two years ago, I did a 5K in similar conditions and imploded. It was hot and I could not handle it.

Here are the splits from now and then:

My time today was an astonishing 19:44, surprising because of the weather conditions. In 2006, I got a 21:44. My personal best, set in March this year on an ideal sunny winter day, is 19:31. I'm very happy to go sub 20 again. It just confirms the type of fitness i've built up even though I know I can get fitter and leaner. 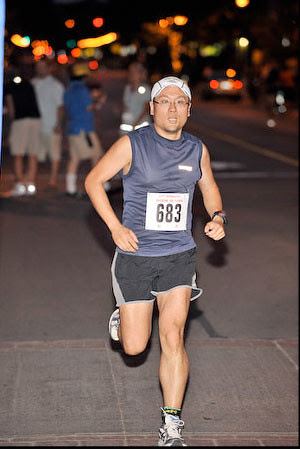 Another surprising thing is that I placed 17th overall out of 517 and also came in 2nd in my age group. It's a small race but I was shocked to place. So we stuck around and I picked up my prize, a Puma water bottle/waist band. 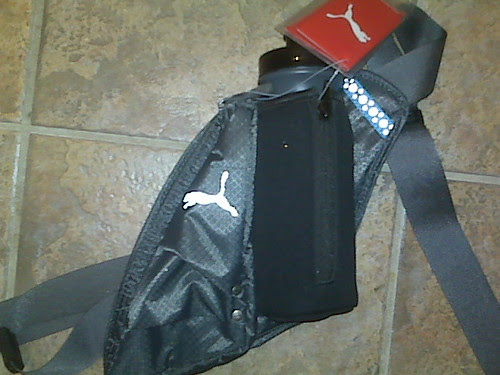 Great race! Nice consistent splits. Wow you made up 200m. That's quite fast. Looks like you had a strong finish. Congrats on the placing!

I was just reading an article from a past issue of "Runner's World" and it discussed ways to improve your 5K race times. The article highly recommended you complete your first kilometer the fastest and quoted some research to back this theory up. Nice race time.

I am from the north/midwest US and the big increase in temps over the long cold winter has caught me by surprise - its been hard to adjust. Sounds like you have made/will make a great transition. Congrats on another near personal best!

Fast race and nice place! Way to pick off runners, or nearly so. I always do best if I go out fast (for me) and hang on. you went out fast then stepped it up at the end. Way to go.

you kicked ass! Congrats! And on to another marathon training plan... I'm so jealous, you have no idea! I've been MIA but will update my blog soon.