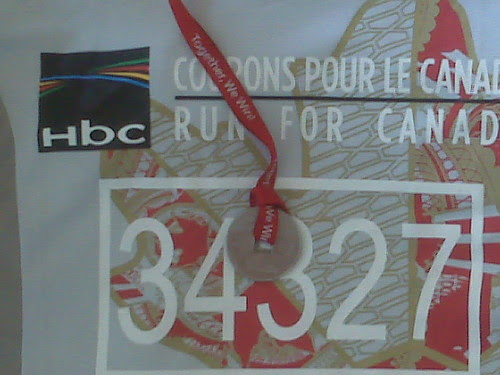 First off, Happy Canada Day! You can find the Toronto results here. All HBC runs here.

What a beautiful July day for a race. Not hot at all in the morning, actually, it was a coolish 13C this morning, but rising fast. I got up early to eat a few pancakes then, as the race site is 2K from my condo, I did a warmup run to the race site, arriving there around 7:30.

Lots of people doing the race this year, almost 1600 compared with about 1000 last year. I have a feeling this is going to become a mainstay on the race calendar if it can attract those numbers. It's my first time running that race but at the same time, it is run exactly on my home course, a route I take 4 out of 6 running days.

The race raises money for our Olympic athletes and it's timed for our national holiday, so a good cause and good timing for a Tuesday morning race. I had no real goals running this but my thought was to at least make it an LT paced run and harder if I felt good.

The first kilometre I spent quite a bit of energy weaving through the crowd trying to find my pace. A lot of slower runners seeded themselves up front but I passed the first kilometre mark in 4:10. I tried to settle into the run but I found my mind wandering. I was looking up at the sky, I was closing my eyes for bits, just anything to stop thinking about the effort.

I got the big wakeup call when the 2K split came in at 4:21! I immediately went into a higher gear and started to race in earnest. Kilometre three I think included a downhill bit and I started to target runners ahead, clocking in at 4:06. I was kinda surprised that the race was going by so quick and I didn't feel like I was giving total effort. The wind was cooling me and we had shade to run under, so that was nice. What wasn't was the race shirts they gave us. I run in singlets so running in a T (and a heavy one that was a size too big for me) made me feel like a kid with an oversized shirt.

I hit kilometre four in 4:11 and kilometre five in 4:11 as well, under 21 minutes for the first 5K, not my fastest half of a 10K. I took a few sips of water at each water stop but I decided to run by them hard.

In the second half of the race, a runner going at a good clip came past me. He was running at a pace that I could sustain so I hung on to him on his heels. I'm sure I helped him push it a bit, but in the next three kilometres, we proceeded to keep up a good pace and pass about 10 runners. Six in 4:07, seven in 4:07.

The eighth kilometre included a hill (about 40 feet climb) that I always run with strength. It's not a killer hill but when you're racing, it takes big effort. At the bottom of the hill was a water stop and I took a sip and started to up the pace, shaking off the runner I was pacing off for the past two kilometres. I did the kilometre in 4:11 and gained on quite a few runners.

The trick to this particular hill is that it crests, flattens out, then there is a gentle slope. Every time I run it hard, I hit the crest and up my pace, I coast for a bit to recatch my breath, then accelerate into the downward slope.

The last two kilometres were great. I was running alone but 100 metres ahead of me was a big group of 8 runners in formation. I made it my goal to bite at their heels with a kilometre to go. I upped the pace and I sensed that they were fading and caught one of the runners. After I passed him, he surged on me but I hung on, only to pass him about 200 metres later. The last 800 metres, I caught two more runners and passed them strongly. Then it came to a few final turns and we were all running hard. I broke into a near sprint in the final 200 metres and passed two more (while being passed by one).

Final time of 41:31 which is 10 seconds slower than my PB but I'm happy since it's the second-fastest time I have and given the nature of the mostly flat course, it's great compared to my downhill 10Ks i've done in the past three years. I didn't come here to go for a PB. Today was really supposed to be a recovery type run after Sunday's 20 miler so I'm really pleased my legs had more than I thought.

Saw Fran after the race and caught up. We jogged back to his car and I finished my mileage for today with 12 miles.

Happy Canada Day and glad it was such a good race! I should have done it. Next year I suppose.

Sounds like a pretty fine job you did! Way to go!

This was the first time I did this race also! We had just over 400 in Calgary for the 10km. Great day here too!

woohoo close to a PB on a hot day is very good! I'm happy you had fun it is a great race!