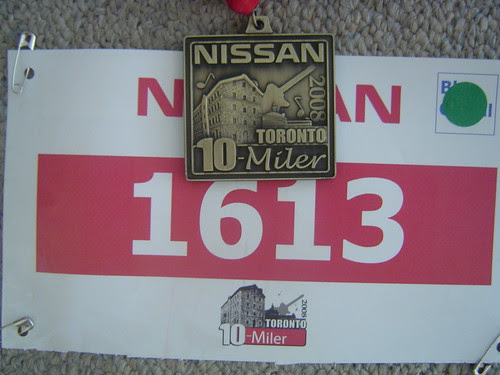 Before this morning, I've run two 10 miler races, both were done last year. The first was the inaugural Nissan 10 miler which I did as a marathon pace run with an LT portion. I ended up doing it in 1:15:48 last year, well off what I'm capable of. Then last fall, I paced R. in for a 1:40 finish (we hit it pretty much right on the dot) at the Army 10 Miler in Washington DC, I believe it's the biggest 10 miler in the States.

Having run 21 miles on Saturday at a pretty decent 7:54 average pace, I felt pretty tired most of Saturday. I ate, rested, ate some more and rested. If you can call laying on the couch the afternoon before you race tapering, then I tapered very well. Reality is that 21 milers (34K) take a little bit out of you.

I was up at 4 a.m. for some pancakes (ever try the Eggo toaster variety) made into a peanut butter pancake sandwich.. yummy. Back to bed but was ready to leave my condo at around 6:55. I intended to jog to the race site, which is almost 3K away. It was starting to rain, only a little spitting, but I decided to catch the streetcar and ran a mile to the race site.

Fast forward to the start, and I'm lining up in the green Corral. They started the 5K and 10 Miler race together so it was congested with runners of all paces, including some slower ones who snuck in at the last minute. My goal was this: Run 4:30s (7:15 miles) for the first 5 miles, then pick it up to tempo pace, maybe around 4:20s (7 minute miles), for the last half.

With the start, I found myself having to weave around people, which led me to turn it up a little to get some room. I knew I was going faster than 4:30s and when we hit kilometre 1, I saw 4:25. It felt a little too easy, so I stepped it up a bit. Around the next few kilometres (2 in 4:19, 3 in 4:21) we were getting more room as the 5K runners turned around. I saw Fran and he was looking good.

I ran behind an old co-worker of mine (who blogs here) and he said he was suffering today. We chatted a bit, I told him I ran my long run yesterday and he said 'I'll see you at the finish by the massage table!' I said bye and got to work.

At this point, I really had no desire to slow down the pace. The next kilometres clicked by and by then, the runners around me were keeping a consistent pace

A few people surged ahead of me in the first four kilometres, but after that, I was never passed. A few people who did try to run ahead were clearly labouring as you could hear their breathing, loud and heavy. Mine was light and had not gone past LT. I decided then that the second half of the race could go like this. Try to maintain a fast pace and just past people who were naturally slowing down.

So I picked it up. I was tailing a few people and would use water stops (I took water/Gatorade at most of them) to break free and up my pace. The fun was really beginning and I felt I was racing. I hooked up with two other runners going at a good clip and spent about 3K running with them.

I was feeling really good. The two guys I was with were also in good condition. We were like a mini peloton, catching up to runners and passing them strongly.

When we hit the 11K mark, I decided to make my move. I felt good and I felt that even this LTish pace was manageable. I made my gamble and pushed it up. It's funny it only takes a little effort to move forward but I went from doing 4:20s to 4:22s to just a tad bit faster. There were people I wanted to catch up to. In my mind, this was now a 5K race. Three miles. A short LT session. I wasn't tired. My endurance has been built up by this marathon training and a few miles was nothing.

I had lots of ground to pick off runners. There were no big packs, just one or two runners so with the mental boost of just having 3 kiometres to go, I pictured that I had less than two miles. Two miles? That's nothing. A few V02 max intervals. I had entered a new zone -- target, surge, pass. I was targetting hundred metres ahead of me and beyond. They were slowing, I was speeding up.

I could sense that I could make major ground. It was time to push up to 10K pace. Why not, this race was almost over and I wasn't close to red lining it.

And so the final kilometre and in my head, that was just 2.5 laps of a track. This mental boost helps me break down the long distance into managable pieces. I passed a few more runners and tried to chase down two others. They stepped it up.

So my goal before this morning was about 1:12:30 given yesterday's long run but clearly I had more in me. Final time of 1:09:29. Very happy with the time and I felt that if paced better, I could have given more in the first 12 kilometres. This is a huge confidence booster. I know my LT pace should be in the 4:14 kilometre range and I think i'm getting there.

Email ThisBlogThis!Share to TwitterShare to FacebookShare to Pinterest
Labels: lt

WOW!!!!!!
I ran the same race but nowhere near as fast as you! Wear that medal with pride!
I'll get fast like that someday...:)
Maybe do a recovery run tomorrow?

"made into a peanut butter pancake sandwich"

Was that a fourth-level class at George Brown?

Great run, sir. You are a monster.

I am betting you will be sore tomorrow though; I hope you iced your legs.

Great job Kenny. I'm amazed that can pick up the pace like that. I saw you at the finish and while I was checking the results. I tried to find you after, but you were gone. i've had those Eggo pancakes before but never like a sandwich with peanut butter, sounds interesting.

WOW! You're an animal!! lol

Congrats! Well raced for someone who should be sore and tired from a 21 miler!!!

Hey everyone, thanks! It was a totally fun race and it'll always be on my race calendar if i can make it..