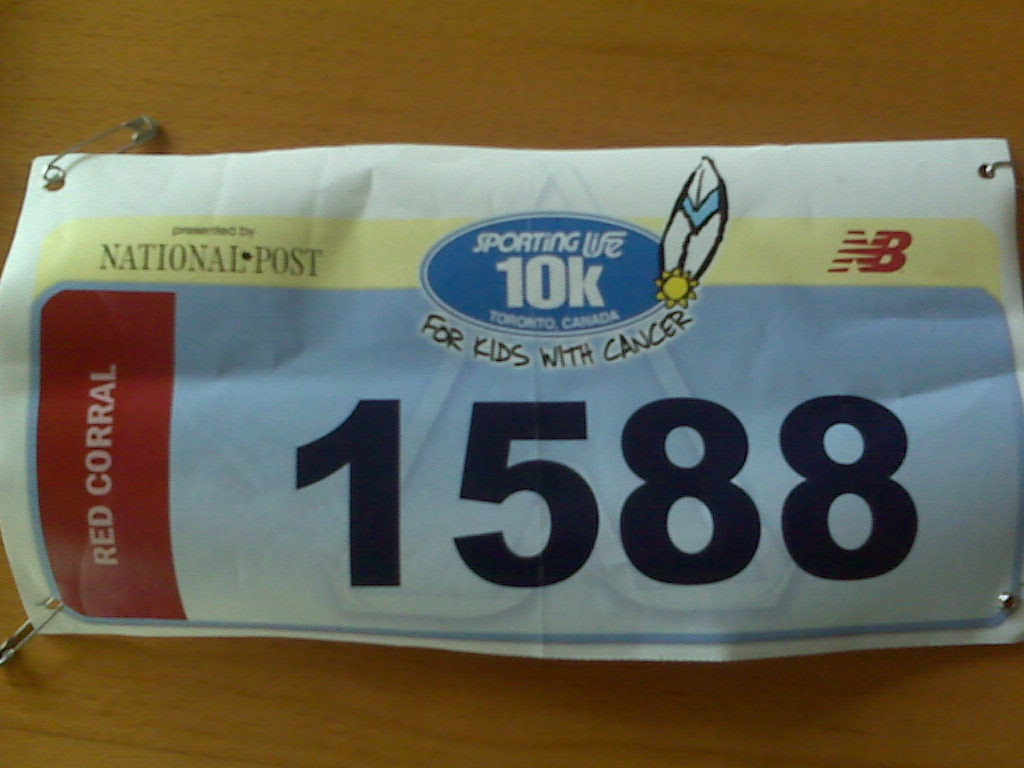 Last night, just before I went to bed, I tallied the number of road races I've done in my 'modern era' of running, that is, when I picked up the sport in 2005 in a serious way. Funnily enough, I had captured all but four of them on this blog and found that I had done 39 races. Today would be my fortieth, something that would come very clear to me (call it a sign) at the end of the race.

I mention that this is my fourth Sporting Life in five years. I missed it last year because I was running a marathon on Sporting Life day. This year, the course is different and I argue even more conducive to fast times, avoiding what used to be a run under our raised highway.

My history with the 10K distance has been mixed. For years, I was in the 42 minute range with the Sporting Life race and that's with a downhill course. My last two serious 10K races (Zoo Run and the HBC Run for Canada) were done in 41:21 and 41:31 range and I felt that I had held myself back in both races. My recent 5K PB (19:25) pointed to a 40:30 or so potential for the 10K distance. With the Sporting Life race, I hadn't run it since 2007, yet I made huge gains in running since then in the last two summers.

That is to say, I entered today with a confidence that I could set a course PB (previous was 42:01). In the last two years, with massive marathon training, my spring endurance base has been strong, meaning I can hold strong paces for longer periods.

Today's race was the biggest they've held, with more than 10,000 finishers. Sporting Life is a huge downhill course so it's called the fastest 10K with a net drop of 385 feet, according to my Garmin. I got into one of the front corrals and lined up relatively close to the start. By the way, the weather was PERFECT. Cool, sunny, little wind.

The first five
We took off and I was able to find my pace. It's pretty difficult to gauge whether you're going too fast when the start is downhill and everyone's blasting out of the start. After about a kilometre of jockeying, we got into a grove and there was enough running space to find your pace. My strategy was to try for a fast first 5K and try not to go much faster than 3:55Ks, given the downhills. At the half, I would do a check and see how I felt then translate this into a second half strategy.

After the second kilometre, was the bottom of the first big uphill, I find that on all Sporting Life races, it's this first hill that breaks pretenders and tests everyone else. I found myself powering up it but most of the runners around me were keeping a strong pace, so I started to hook on to runners.

The splits get really wonky since my GPS had a brain cramp, but as we hit the 5K mark, I was sub 20 minutes at around 19:50. This was a huge moment for me, and I decided at that point that I could give it more. In my head, after doing the checks of my breathing, pace, leg turnover and heat level, that I could sustain this. The next 5K was where the real race took place. It was flatter, featured turns and would be hot.

The rest of the way down Yonge Street from Bloor to Richmond was a steeling of nerves. I was glad to have worn a singlet cause it was getting warm. I started to play a game of naming subway stops. When I was at Bloor, I pictured Wellesley, then College, then Dundas. Of course, other things entered my mind, like the back of the person in front of me, or how the person who just stopped must be feeling really good and it'd be nice to stop too, but it was largely turning myself into a metronome and pound out a consistent pace.

At every kilometre mark, I did the simple math and was surprised to see myself still within range of a 40 minute 10K. I was really surprised because a few 4:10s can put you way off track. During hard races like this (as opposed to 10 milers to half marathons) I sometimes just lose focus of the race and just absorb the pain, but today, I really focused on who was ahead of me. If they were starting to fade, I dropped them and targetted someone else. If someone was running strong, I hooked on to them.

We turned on Richmond Street around the 7K mark and I just said to myself, two more miles, two more miles. I could see the landmarks to the far west and I really tried to keep the pace up. I said to myself that I would regret it if I slowed down at this point, that this pain would be temporary. As we hit the 8K mark, I pictured the last time I did a 1600 around the track, and convinced myself that that's all I had left, just one last hard run before the finish.

Then a funny thing happened. I ran past my old work place, The Globe and Mail, and I had this surge of energy. My co-workers would understand, but I felt like hauling ass, maybe because I was wearing a National Post hat. The last kilometre had two turns, and I knew it'd be close. I really didn't care much, but when I reached the last 15 metres, I put both hands up over my head cause I'd made it through. I knew I crashed through my PB and that I may even have gone under 40. As it turns out, that celebration may have caused me a second or two. I'm sure I could have made up those four seconds with a final sprint, but whatever, I'm not that concerned. I'm not sure I could take credit for going sub 40 on this downhill course, I'd rather do it on a more relatively flat course. That's where the test is.

Did I leave it all on the course? I suspect that if I didn't have to run a marathon a week from today, I'd probably have gone into the second half with more abandon (or even the first half). But it's safe to say that when I saw the prized 40, I went for it with everything I thought I could give.

So just maybe, for my 40th road race, it was appropriate for my chip time to ring in at 40:04, leaving me much to reflect about.

I haven't run 10 marathons, or run Boston, or place too well within my age category consistently, but I have run 40 road races. I remember how nervous I'd get before a road race in the early days. My first Sporting Life was my second road race. Now, races are rituals for me. I eat a certain amount of food, go through the morning routine, reflect at the start, silently stretch and calibrate my watch, toss my warmup top with 10 minutes to go, then jump up and down in the last two minutes. It's odd, whether I'm running a marathon or a local 5K, they've all been to a degree the same to me, to be part of a community of runners. Fellow runners who are about to celebrate the fruits of our training. It's addictive, I love it and I'll be back again.

I liked the new course - I hated that part running under the highway last year. Would definitely like to test myself on a flatter course this year.

Congrats on your 40 road races, and a very symbolic 40:04! LOL that you ran by your past employer and kicked it up a notch! Awesome.