'He lives to run'

I tore through the latest mailed issue of Runner's World while walking into my elevator tonight, flipping through the table of contents to see if it was there. Yes, the annual "Boston Marathon" section. For years, that section reminded me that there was some unfinished business or rather, an unachievable dream. 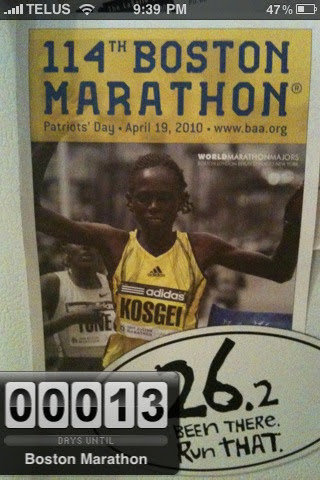 My first road race was one that sparked an addiction to running. It ignited a spirit in me, something that was unexpressed until that starting horn went off. I remember weaving in and out of the crowd - I had seeded myself midway but made my way up the field. It was a cold day, the start of a snowy day. I charged up the final hill and crossed the finish line energized, but also in shock of my final time. There was something to this running thing. Hours later, I defrosted myself in a hot bath, a feeling I still remember more than five years later. I was reminded of that this past weekend because I ran the same race, for the fifth time in six years, but this time as a runner about to go to the Boston Marathon. More than 50 road races later - almost lost track of the eight marathons - I can most definitely say that I am a runner and it has been a slow change of what it means to be one.

Funny story, my girlfriend's niece, who is around 16 now, said to me a few years ago, "You're a journalist? I thought you were a runner."

That made me laugh. How could she or anyone ever identify me as a runner as something that I "do". Then I thought about my passions, and I have many. Friends will know me as a passionate journalist, I've been doing it the moment I walked into a newspaper office 16 years ago or 14 years ago when I worked at my first metropolitan daily. Others will know me as a big cook, for a while I had more cook books than running ones and I did get a Kitchenaid pro stand mixer for my 30th birthday. Others will know me as a tech geek, well that's part of my job.

Me as a runner, hm, that's entirely true. I can speak for hours about running routes, 5K or marathon training, my favourite races, the best running books I've read or who are the top marathon prospects we have in Canada. I dedicate an inordinate amount of time running -- in some measures, I spent anywhere from five to eight hours a week on the roads, not to mention the extra hours reading, blogging.

Boston, my god, I still can't believe I made it there. I am so stoked about the weekend, and it's not because I have some grand illusion that I'm going to PR in a big way. In fact, in my own way, I sabotaged any chance to be stupid and go out fast by ignoring my own best training advice (which is to follow the program to a tee).

I'm not sure what it is, but I have a feeling that I will feel honoured to be among other like minded people. People who trained so hard to get there, people who are similarly passionate about our sport, people who through either talent or some combination of grit and fanaticism got their dream finish so we can all start another 26.2 mile journey from that famed starting point in Hopkinton, Massachusetts. We will gather there, shipped by yellow school buses (and yes, I'll feel like a kid on his first day to school) so we can run the race that's so old it's almost as old as the Olympics, so famous that it's the one running event everyone has heard of, and so hard to get into to that others know it's not just some mega race, but one that you should be privileged to run. In this, Canada's 'Olympic' year, it's my very own version of a runner's Games.

Who am I kidding, those 'people' I refer to are my people, they're runners. All of this is to say that it's been a pretty long road for me to get to the Boston Marathon. Years ago it was a fantasy. In October, it was a dream accomplished. Now, it's 13 days away.

Over the weekend, R.'s mom was talking about me (this was relayed to me over the phone later) and she said something to the effect of, "Kenny, he lives to run." She laughed, and so did when I heard the line, I but I guess there's a little bit of truth to that. I live to run, but maybe it's flipped.

I like the last line. Boston is almost there, good luck man!

I fell hard into the arms of running, for my birthday last year I got a custom ring with my motto inscribed - "live to run; run to live"

prashant said...
This comment has been removed by a blog administrator.
9:02 PM

Hi,
I really enjoy reading your blog! My name is Sharon. I am a practitioner of Acupuncture and Oriental Medicine in Philadelphia, Pennsylvania. My practice is based around pain management /peak health for optimal performance. I work with many triathletes as well as marathon runners in the area. I was wondering if you would like to exchange weblinks/blogroll? Let me know if this might be of interest to you. In the meantime, thanks and I’ll keep reading!
regards
Sharon