I spent the day before Boston on my feet when R. and I went out for that 5K BAA race. We took it easy and it was a perfect opportunity to get a warmup run in and more importantly figure out how to take pictures during the run.

As a note, this pre-race and race report to come will be rich in photos and a few videos. Why? Because if I was going to soak this in, might as well run it easy and if so, why not take pictures and video. I ended up tweeting a few of the images during the race. Made for interesting running.

Anyways, bought an iFitness belt that fits my iPhone pretty well. I'd tuck the phone into the belt and take it out whenever I wanted to take pictures. 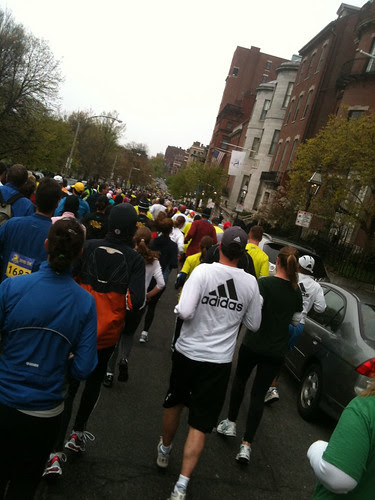 We finished the race in over 30 minutes and it was kinda fun to run the final stretch of Boston while doing a 5K. Big crowds in the end and we ended up slipping through the fence but not before grabbing our medals.

The rest of the day was pretty busy, we went to the North End for lunch where I devoured a plate full of squid-ink pasta (not sure why I ordered that) and a cannoli. Then we went off to Harvard Square where R. did shopping. That left me on my feet. Then off to Wagamamma for dinner, so for the pre-marathon dinner I broke my streak of pasta dinners by having ramen noodles. Laid out the gear and was in bed by 10 p.m. Did a midnight snack (don't ask me why) and was up and getting ready by 5 a.m. Checked the weather. Perfect.

I arranged to meet with Lee, Fran and Zoran at my hotel, since I was a few blocks away from Boston Common. We all gathered by 6:20 and made our way to the park. 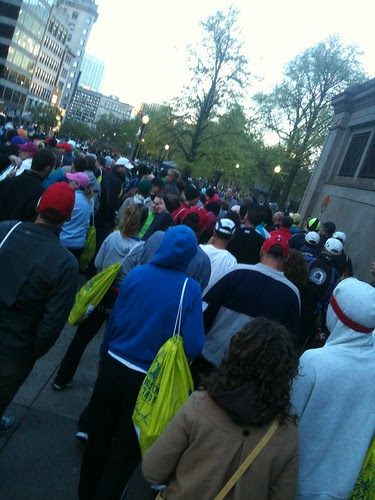 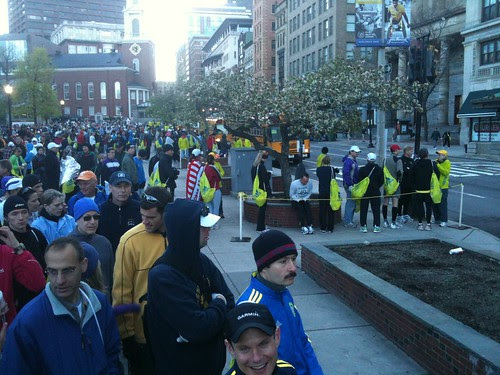 Having Lee with us helped us navigate the crowd, he just directed us to walk farther in and in no time we were on the bus. That is, until we hit traffic. 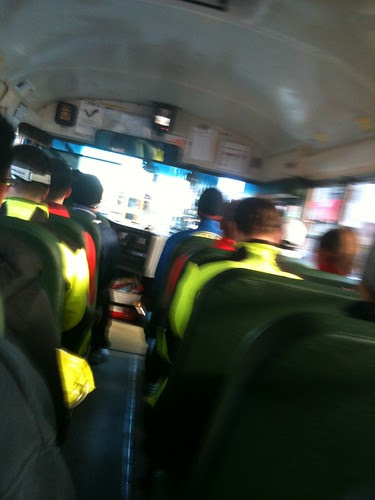 Ate my banana and half a bagel. Took more than an hour to get to Hopkinton there but that was well. Luckily, I listened to the advice to not drink a hell of a lot early in the morning so no need to hit the washroom.

The village was already filling up but managed to take the obligatory picture. 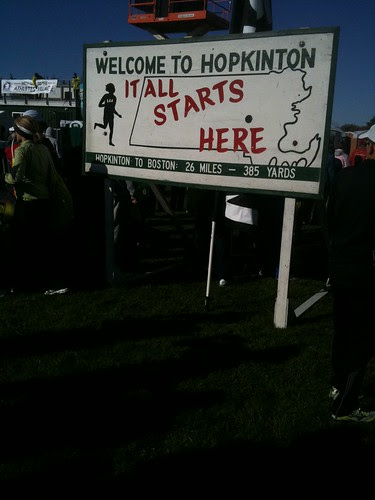 It was sunny, but cool, a little windy. The area was nothing like I thought it'd be, even having seen the layout and other pictures. Just runners everywhere, sitting down, stretching, lining up for water or the portapotty. 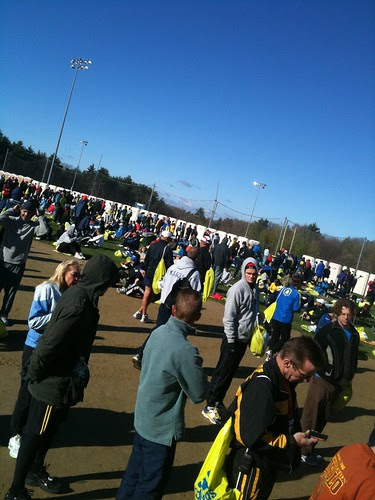 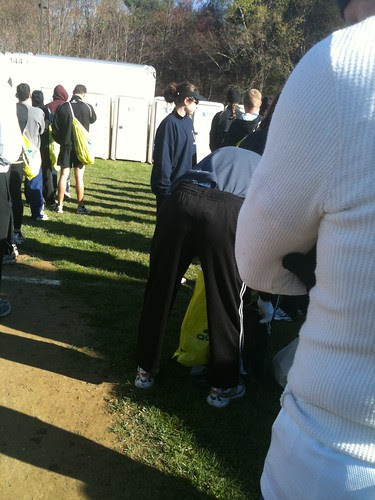 We wandered for a bit then we took turns hitting washroom. Ate a banana 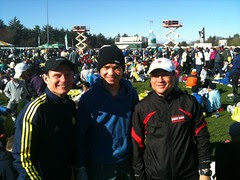 A video from where I was sitting

All of a sudden it was after 9 a.m. and it was time to get ready. The four of us were just going about our business, taking off warmup clothes, putting on BodyGlide, getting our gels out. Was interesting to see everyone with their routines. We went out to the baggage buses and said goodbye to Lee, who was going to gun it today. Zoran we lost immediately and I told Fran I'd meet him at the back of the wave. 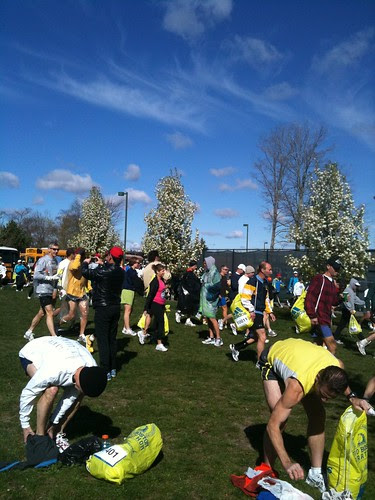 I think this was my first "holy shit" moment of the race, I was just walking to the starting line and all$ of a sudden hundreds, then thousands of us were going. It was quiet and we were all walking with purpose. 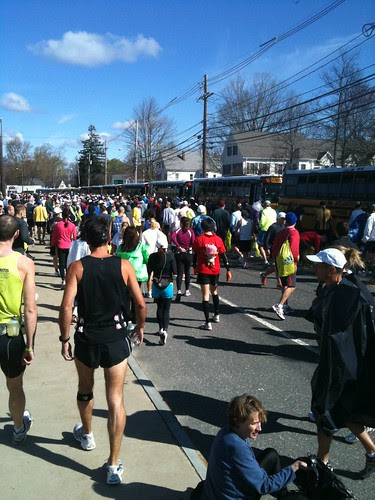 I checked out everyone out and realized that if this were some local marathon, everyone around me would be those in the front corals. Yes, I know we all qualified with pretty fast times to be in Boston but seeing those people put me in awe, cause I was one of them.

Lee happened to catch up to me and we made for the final portapottys near the turnoff. Since he was going for a big race day (he was in corral 3), I told him to get in front of me. As we were waiting for the line, there were 15 minutes left. Crap. A little too close. The two fighter jets flew by. The anthem played and were were still waiting. We bid goodbye and I walked to the back of wave one. Wow, what a big group.

I headed for the back and people were checking out my bib and asking me what I was doing there. 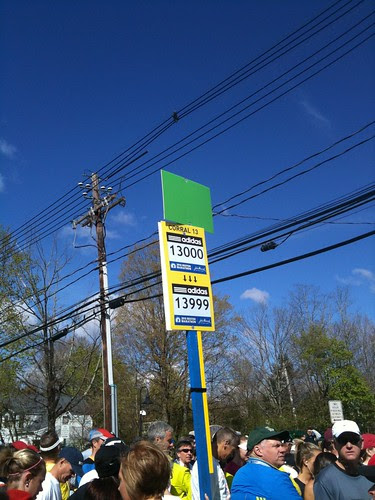 Bumped into Fran (he's running two marathons in six days so he was taking this easy as well) and we lined up together, and I saw a guy with a bib for corral four explain to someone he wanted to soak this in.

The sight in front of me was amazing. 13000 plus marathoners, all qualifiers. 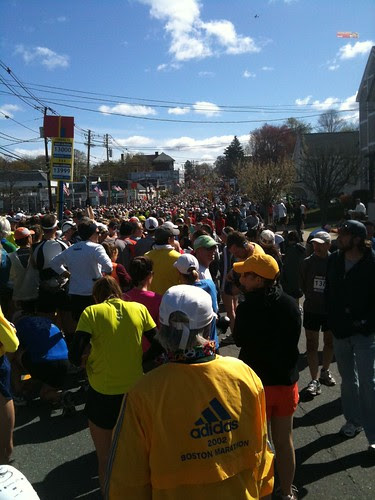 The race started and we began the slow walk to the start line. I took a few videos, remembering to celebrate this moment, almost missed where the freaking start line was, and began the Boston Marathon unlike any race I'd have ever done.

A camera in my hand, a big smile on my face, and a nice Sunday long-run pace in my plans. The announcer said "you made it all the way to Boston" and I let out a woo hoo! (see vid below). Boston, here I come.

I got a video at Wellesley. It's a bit jumpy to watch. I'll upload it later.

It's very exciting to read that and look at the pics and videos-I'm glad you approached it that way-you look happy!

It's awesome that you have so many pics & vids to remember this day.

Awesome stuff Kenny! I am not going to lie I am a little envious.

I'm not-I figured as a reader that I was part of the journey!

Question though--some people pay to get in as part of a group--so if one were to do that would it be the same experience or is it all about feeling like you qualified and so did all these other people? I'm thining it's the latter.

Thanks guys, stay tuned for the race report, which will be a monster, with all the pictures i took.

Mark, 20000 entries are for qualifiers. Then 5000 go to charity runners. Then the rest, I guess about 1000, are invitational entries. I think they give those 1000 to sponsors, volunteer organizations and others. I think just to be part of the race, front or back, it's the same.

That is BY FAR the best and most compelling race recap I have ever read. Almost like being there. Congrats!