My fifth running of the Sporting Life was, in the end, better than expected, slower than I am capable of and a nice confidence booster going into my next marathon.

The downhill course is extremely popular, and now can boast to be the biggest road race (by the single distance) in the city. Fourteen thousand runners, an amazing amount and I think we can draw a hell of a lot more.

As late as last night, I had considered not doing the race today. The bad allergy season has left me congested, not great for breathing but I downed another antihistamine last night that made me kinda okay. I was tired, not feeling great from Saturday`s warmup run.

Took the cab up there and it was already buzzing. Bumped into a co-worker and just took it easy, no pressure. By the time I decided it was a go, I had reset my expectations. A 45 minute 10K is more of a pace run. A 40 minute would be about racing it, so I aimed at sub 43, which would make it a tempo run.

Here is a quick rundown of the race

1K 4:18: First kilometer is net downhill, and I took it easy, just getting a feel for the pace. I was not 10K racing it and I even felt my left lower calf complain, so I eased off a bit, but my breathing was fine. A little bit of jockeying for position

2K 4:12: Decided I felt okay so I stepped it up a wee bit. Again, felt comfortably hard but not the beginning of hurt.

3K 4:14: This stretch was actually a combo of up and down hill, and my Garmin shows it net uphill, with the stretch alongside the cemetery. Again the splits are not bad, about an upper tempo pace. Another runner asked out loud 'anyone cramping?' but no one answered. I ran beside him, he looked at me, sees my Boston shirt and says 'how is it going' I answer 'just taking it easy' as we run up the hill. Others around us are silent. I wish him well.

4K 4:10: I hit this part and I know others are suffering so I am starting to gain ground and passing those who went out too fast. Was feeling better than expected.

5K 4:13: The 5K mark takes us to about the Bloor area and I knew it was a little more downhill, but forgot about the slight uphill too. Again, I start to pay attention to the runners and the course. I think I decided that I could start racing this now.

7K 4:08: We turn a turn that becomes pretty flat around this kilometre, and again I am trying not to coast. Others are slowing, a few of us are keeping up pace. I track other runners who are stepping it up and we go. Great feeling, feeling a little more than comfortably hard.

8K 4:10: I kinda wished I was farther along, since I was not paying attention to the markers or my pace, I was kinda surprised that I had 2K to go when I thought I had about a mile. Oh well, kept her up.

9K 4:23: We kinda get congested around a few turns and I let the pace slip a little. In my head, I had a sub 43 in the bag and I guess I started to coast. Then we hit a stretch where several spectators cheered me on, one saying "way to go, nice recovery from Boston!" That for me is a boost, and added with another Boston cheer, I realize that yeah, I ran a marathon two weeks ago, but I took that easy, I still have more left, so I push it again. Thanks spectators!

10K 4:02: So I push her up for the last kilometre, it burns, but feels great. I never redlined it. Don`t get me wrong, it was hard at points and my feel felt like they were burning, but I kept on thinking of in the whole scheme of distance running, a 10K is a different beast than marathoning. Faster and painful, but mercifully shorter.

Chip time is 42:03, two minutes slower than my racing effort a year ago. Considering the circumstances, not bad at all. Met fellow blogger Boris after the race. Also my coworker did way better than expected (I was not surprised) 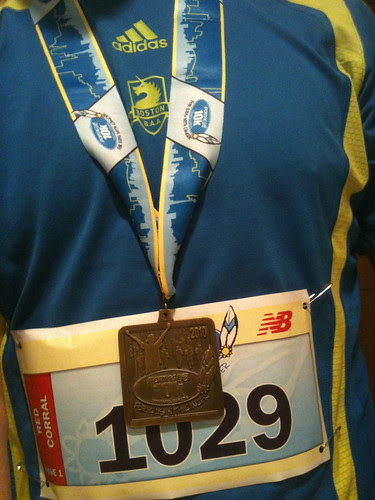 Well done, I was right behind you with 42:32 very thankful for the weather this morning as-well.

I wouldn't have minded some rain with that humidity, though I was nervous about the possibility of thundershowers.

Good meeting you today, I thought it was you in the corral but I wasn't 100% sure.