At the starting line yesterday, with the brilliant sun betraying the fact that we were all warned that it would 'feel like' -17C, I knew I was in for trouble if I didn't act. Guys don't like asking for help, whether it be for directions or in my particular case, a wrong choice in wardrobe. But I knew that if I didn't seek any, then I'd be in big trouble.

The rule for winter running is that you should be chilly at the start. Cold = good. For winter races, you should be basically shivering. Problem was, I was not only not cold in the start corrals, I was warm. Minus 17C my ass. The sun was bright, wind light and I was trying to find a way to tear off the sleeves off my 'light' windbreaker that was covered by my T-shirt (and a base layer underneath).

So I asked the guy behind me if he could help: 'Can you help,' I asked, trying without luck to unzip the jacket. He did after a few fumbles and asked me if I was going to throw it away. 'No,' I said, 'I have pockets.'

I've written before about this course. It is one that is entirely possible to race with great times and the course I think has with each part a strategy.

The goal was to go out at a comfortable pace. I wanted to try a little faster than 5 minute kilometres, which is how I've been doing some of my recent long run paces (and recent half marathon pace bunny assignment)

Tried to no go too fast, but maintain a fairly strong pace, comfortably hard I'd say. A lot of jockeying for position in the early kilometres but we settled in. The first 8K is a feeling out of the field, a lot of people start off too fast, but Around the Bay features a pretty fast field, so a lot of great runners to pace with. Makes holding such paces relatively easy.

We were running into the sun, and by know, my fourth ATB, I anticipated each corner, picturing the next turn ahead of me. Pretty hilarious to know a course that well.

Heading into the 10K mark, as we were turning into Burlington, I was feeling really good. I put on a pace band (5 min kilometres) but didn't even look at it once. Barely even looked at my watch. Just going by feel, going with the flow. The kilometres went by fast.

Felt good to be going. And without those damned sleeves.

Most of the next 10 kilmetres were flat, with some slight rises. This portion of the ATB it's easy to go out too fast. The open spaces make you some how want to go faster. I just plugged away, using the stronger runners around me as targets so I wouldn't lag too much. The splits below reflect that, pretty good running. History shows that the paces below map a little slower to my (trained) marathon pace so my muscle memory and heart were responding okay.

Experience, of course, let me down when I found out that morning I only had one gel. As it turns out, I was waiting to use it for the 21K mark, I never used one at all. I relied mainly on Gatorade at every station and a few sips of my Gatorade supply I had with me. The cool weather was a major aid.

The next 10 is what makes the ATB a wicked course. Basically, from kilometres 21 to 26, you get five hills. All in all, they are not that bad, as each hill as a corresponding downhill for you to recover.

I just tackled each hill by going with the usual, 'same effort, different pace'. If you look at my splits below, the reality is even though you go up the hills a little slower, the downhills make up the time. The kilomtetre that included the last hill had a fast kilometre before it.

After the big hill, it was a slightly downhill course to Copps. I've done some great runs in this part of the course. There was this one year when I did basically 10K speed in the final kilometres. This one was good, as I raised the tempo in the last two kilometres. Real reassuring to run the fastest kilometre as your last. 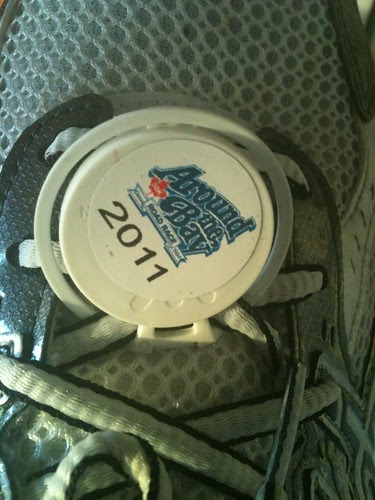 Three weeks till Boston!
Posted by yumke at 9:34 PM

Congrats on a great race. It is always nice when you can run negative splits and progressively get faster toward the end.

I thought I was going to freeze to death, wearing a short sleeve and arm warmers under a long sleeve, but I, like you, was quite toasty! I felt like I dressed properly for the conditions.

Congrats on an awesome race!

Thanks guys, and yes, it was a weird weather day. Turned out to be a gorgeous running day if you dressed right.

It was so much warmer than I expected. I was roasting and it would have killed me if I had been "racing."

Congrats on another solid & consistent race!