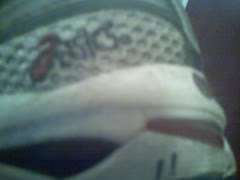 lastrun
Originally uploaded by yumkerun.
... These are the pair of shoes that I bought last spring. You see the two marks with my Sharpie marker to distinguish this pair from an identical pair that I bought around the same time. The other one only has a few hundred kilometres.

Anyways, these shoes and I have been through much together. We trained through the summer heat, in those big long runs in August, those last tuneup runs in September and on October 23, they carried me 42.2 kilometre in Chicago.

After Chicago, they didn't go to the closet; instead, they continued to be my daily running shoes, through the fall season as the leaves littered the trail, and on to winter, through snow, slush. Only a few weeks ago did I start to realize that they were telling me it was time to let go. My legs were starting to feel every step with just a little bit more force. I went back to my running program and started back logging all the runs and I was astonished to see I'd done almost 1,000 kilometres in these puppies.

So I brought them to DC a few weeks ago so I could bring back pair number one back to Toronto. Yesterday, R and I went shopping and I bought a brand new Asics 2110 -- blue, and about $100 (I will always buy my shoes in the States, so much cheaper).

Instead of using the new ones, I decided to take old faithful on one more run. We ran up the Mall, where they were prepping for the Cherry Blossom parade. We trudged up to the cemetery and ran around the Tidal Basin. I was lost for a bit halfway through the run, but ended up discovering a new trail. I looped back to the Mall and did a final 5K to finish my 21K route, right past the White House. A fitting final tribute to these old shoes. I don't think i'll throw them out just yet, but its running days are over.
Posted by yumke at 1:23 PM

Email ThisBlogThis!Share to TwitterShare to FacebookShare to Pinterest
Labels: DC

Sad, but a great tribute to a faithful pair of shoes... I know I have a hard time getting rid of shoes that have gone through so much with me... I still have the pair of shoes I ran my first marathon in... can't say that I want to get rid of them just yet... great post.