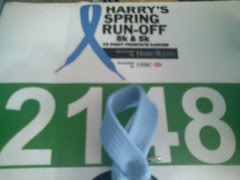 media1.jpeg
Originally uploaded by yumkerun.
Cold, not too windy, but cold. The bone chilling type. I checked in my bag and coat about 30 minutes before race time and did a few warmup strides. About 5 minutes to the start, I spotted an old co-worker (and a former track star in his own right). We chatted and I told him it was finally cool to run in the same race as he was. He always says he'll do poorly, but I know better.

The race started, and I had positioned myself near the start, so there was not too much jockeying for position. The first kilometre was relatively flat with a slight incline. My former co-worker was running strong, weaving in and out of the crowd and going fast.

The rest of the race seemed to go relatively calm. There were challenging hills, enough flat areas, and nice declines and sharp corners. It's a scenic route through the park and by the time I got to the water station, I decided to forgo liquids.

Oh yeah, that hill that I went down after the mile marker, we had to go up about 100 feet in the span of a mile. My heart rate was already up, and I just couldn't power up the final hill. I ran it, yes, but not at a good pace. In fact, I think I did the final kilometre in just a little faster than 6 minutes.

My friend put in about a 35:16, which made me marvel at my result two years ago (35:46). I'm learning that I should never underestimate the course, and that proper race prep begins not days, but months before the race. Lessons learned. Carry on.