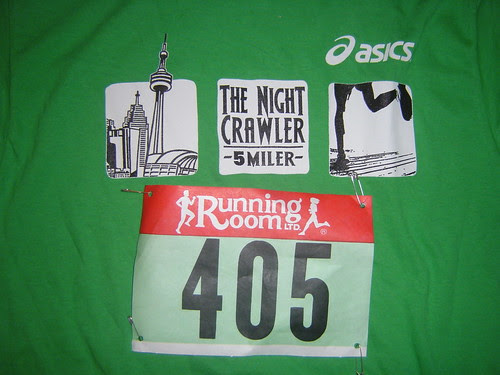 Have to say, this is one of my favourite races. Run in the beginning of summer (or a few days before, as it was today), in my home course by the water. Some people head out for beers on a nice summer day after work. Us runners? Nothing like a good old race.

Also has the most kick ass cotton T-shirts. I love wearing last year's. This year's, just as cool.

As I wrote earlier, I've been feeling under the weather lately, but I've also quickly bounced back. I had 14 miles scheduled today (ugh) so I ran 4 miles early this morning. I would do the rest of the miles in the afternoon, 2.5 mile warm up, the 5 mile race, then a run home of 2.5 miles.

I got home, hydrated and was out the door and ran to the race site. It started to rain as I approached the site. We were wet but the rain quickly ended and we were dry by race time. I knew that two friends were running it: T., who has recently joined our sport, and L., who I greatly admire and also ran Boston in April. I saw T. and we hung out before the race.

The start was really congested as we were running on the road of a high-traffic lane for the out part of the out and back. The race was gun timed so I tried to work my way up to the front, but didn't get that far.

A couple things were in my favour today. My Garmin, I knew, would not bonk out since I cleared it of two months of memory yesterday. It was cool (although it was cool last year). And I've tonnes of training under my belt this year.

We were off and I spent the first 600 metres trying to run around people. On our right, there were cones. If you wanted to make ground, you could go on the outside of the cones partly in the traffic lane, but you'd risk running into a car. I decided to run it hard and used the outside lane a few times. We had a nice downhill section and I just cruised down, passing a few women who were running strongly. We passed the 1 mile mark and the person was calling 6:30, 6:31, 6:32 to which the two women quickly said 'woah, we're going way too fast'. I knew the pace was just right for me so while they slowed down I sped up.

Around this point, L. came blazing by me. I could recognize him from behind and I let him go. He settled in about 80 to 100 metres ahead of me. I also saw a guy who was in the 5K race I did last week.

For the rest of the first half, I felt good. I was not labouring my breathing and I felt my running cadence being smoothed. I think part of my maturing as a distance runner is that I'm learning how to run at different speeds and there's a certain amount of confidence that I now have with all the thousands of training miles in me. I didn't go out too fast and I started upping the pace so I'd slowly gain, then pass people.

The first two miles were done in 6:29 and 6:42. Around the halfway mark, there was a rise, a few corners and another rise so we'd make the big Humber Bridge on our way back to the finish. I enjoyed these rises and was among a strong group of runners. We crossed the bridge and we headed downhill. At the bottom of the hill there was a pool of water so instead of running three wide, we turned into single file to navigate around the pond. After that, it was free for all and I started to turn it on again.

We were running on the board walk where we had to dodge goose droppings. Later on, we actually had to dodge about 10 Geese that decided to cross. They are huge and I wouldn't want to smash into one.

I hit mile three in 6:34 and mile four in 6:29. By the time we had 2K to go, I was feeling it. My breathing had increased but I felt I could gain on more runners. In the last kilometre, there is a fair sized hill. I saw L in the distance and a few other runners. I had done this hill literally hundreds of times, so, drawing on the ghosts of the Around the Bay and the Flying Pig Marathon, I summoned my hill climbing memories and flew up the hill. I made huge distance on the hill and at the top, I turned it on even more, passing more runners. I nearly caught right up to L in the final 300 metres, almost within touching distance, but he had more in him and turned up the jets. I had used up my gas.

In the final straightaway, I heard a few runners gaining on me so I turned up the jets to strider speed. I saw the time on the display was sub 33 and I was very happy to cruise in a few places behind lee with a final mile in about 6:30.

My Garmin time is 32:44 (when I actually started running as opposed to walking up to the start lne. The official gun time was 32:49, so I'm very happy to outperform my expectations today. I think races bring out your potential and I'm happy as hell to knock off more than two minutes off the 5 mile PB. This also smashes my 8K times but to be fair, my 8Ks were run in huge hilly courses.

After the race, L and I grabbed hot dogs and other goods. Watched T cross the finish and we hung around some more talking shop the way only runners do. Fantastic time. If you love racing this one's one of the best small races our city has to offer. It's a must do.

Nice work there. Sounds like a fun race. If i worked or lived downtown, i would definitely do it.

Agreed - that is a strong local race. Solid organization and a lot of talented runners. Hot dogs and Krispy Kremes were welcome post-run treats.

Update: L. is just happy he didn't pass out. One of those nights.

WHOA! Killer PR. You rocked it! You are progressing awesomely.