It was my mile

I had to work today, starting at 10 a.m. so I decided to pop out for a 5 mile run at 8 a.m. I came home, plugged the Garmin into the cradle and saw that the monthly total was sitting there at 295.75 miles.

And here I was, the last day of this month, with a golden opportunity. How many times will I have a good month for running like I just had. Good weather with not too much heat. A week off right in the middle. And a bunch of 20+ milers in weekends to boost up the totals.

So I plotted the course that I'd take after work. 4.25 miles? That's no problem, just 6.4K plus another 400 metres (yes, I still think in metric). I joined the masses out there in my neighbourhood as my street fills up during summer holidays -- today, they were watching the airshow.

I did the out and back and ran my heart out in the final mile. It was my mile, my 300th of the month!

Euphoria and milestones aside, the big mileage came because I'm following Pfitzinger's 70 mile plan. I took a look at all my monthly mile totals since January 2006 and it's very interesting to see the peak months before each of my three marathons. (Plus, this blog has been hugely absent of pictures in the past few months and it's good to inject -- Colour Graphs!. Bad blogger, Yumke). 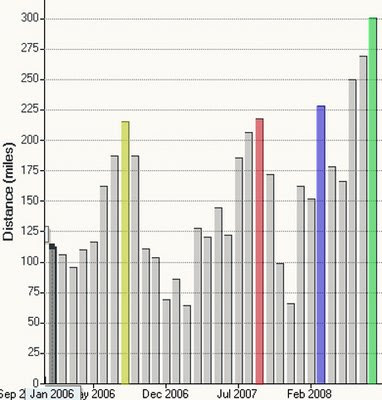 Yellow bar: 215 miles in August 2006 in the leadup to the Chicago Marathon (3:35:15). This was my first marathon and I was following the Hal Higdon Advanced I program. I had a 20 miler and a 19 miler but most runs were in the single digits. I know I didn't do as much quality work as I should have.

Green bar: 300.1 miles in August 2008 in the leadup to the Scotiabank Waterfront Toronto Marathon AND the Marine Corps Marathon. What can I say? Notice that right after my marathon my mileage didn't fall off a cliff? In fact, I believe I started this training cycle about three weeks after Flying Pig. My first full month of training in June saw me do 250 miles, blowing away all previous months. In June, I did two 18 milers and a 20 miler and was starting do to 14 mile midweek runs. In July, the mileage flew up to 268. This month, most of my runs have been in the double digit mileage.

Seven days until the taper begins!
Posted by yumke at 6:45 PM

Nice going! 300 miles. That's quite the accomplishment. Are you going to do any tune-up races? I think you'd be able to cream all your PR's.

You're an animal!!! Seriously, very impressive mileage and you're super fast too. =)

Like Fran said you can say good bye to your old PRs... I think a great fall racing season is upong you!

You have put up some impressive numbers there... enjoy the taper...

Great work! I admire your dedication and determination!

Fran, i'm doing a 5K race in a few weeks. Not sure I'll be able to rest for it, in fact I may be drinking the night before! That said, I guess my focus is on the marathon, rightly

Thanks everyone else.. I have a feeling it'll be a long time before I do this type of mileage.. Not sure the 70 mile plan can be sustained for many marathons ...