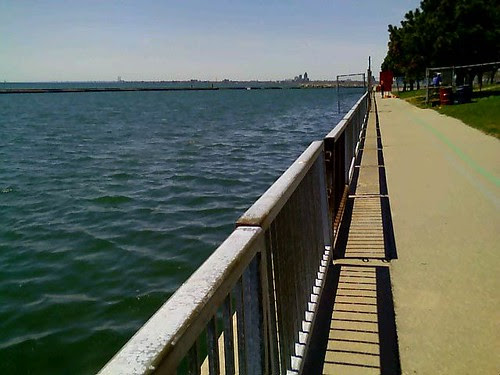 I run on the waterfront route just about every day. Most of the year, I can head west toward the Humber Bridge. It gives me an unobstructed path, and a huge view of the sky.

On the stretch of trail you see above, I hit the 8th mile mark today, the same spot where two days ago was a huge annual West Indian festival Caribana parade. On Saturday, it was crowded with the parade and the thousands of people watching it. It's really strange for me since I get an unobstructed use of this path all but for a handful of days. On Saturday, I took off my headphones and listened to the beating Island music while navigating around the crowd.

On Sunday, while on my 15 miler, I ran the same course, and was treated to the smells of garbage and waste left by the partiers. Styrofoam containers were scattered on the grass, alongside plastic bottles, bags and other markers of a huge party. There were cleanup crews in full strength.

By today, it was mostly clean, the portapotties had but vanished but for a few piles of garbage and the lingering smell of a portajohn (yes, us runners know what that smells like) and a few disgarded coconut shells, I had my path back.

At the eighth miles, while I was zoning out, I saw a huge V-shape high above. It was followed by another. Then another. Hundreds, maybe more than a thousand Canadian Geese were on the move right above me and it was quite a sight to see. I actually stopped running to look up. On the zoom in, you could see each goose. Pull to the wide angle, and you saw Vs or check marks floating out. A good dozen flocks floated into the distance. The geese when in formation are known to go 50 to 90 kms and hour, can travel a 1000 km a day and fly in formation to save energy, forming a sort of peloton. Familiar to racers? Having been dazzled by the airshow, I set back course on my run, and finished my two final miles. One route, three days, three different sights. That's yet another thing I love about running.