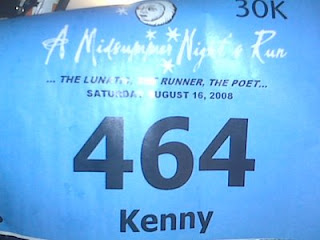 Didn't know exactly how I should fuel up for this race, but I wanted to treat it much like a marathon cause I was using this as a pace run. So I had pasta early this morning, got my hair cut (heat control, you know) and took it easy much of the morning. Napped throughout the day.

I jogged about 3 miles to the race site and it was packed. There were 1500 people doing the 30K and 15K so there was a massive lineup to check in your bags. I sipped from a Gatorade bottle and ate some Sportsbeans. Then they announced that they would delay the start a bit because of the huge crowd -- the 30K would now start off first then the 15K, with its larger pool of runners, would go next.

So I lined up near the front and we were off

I tried to keep the speed down. There were so few runners at my pace. We went out little fast. Then the 2:15 pacer went by clearly going too fast. I decided to let him go.

By the fourth kilometre, I found pace and I ran beside a runner who said he was doing 4:40s. We now were running behind the back of the pack of the 15K runners. For about 9 of the next 13K, I had to pace by running by slower runners. It was not easy.

Was nice to chat it up with another runner in this part. I found my breathing to be easy which is a good sign that this wasn't major effort for me.

I missed the second water stop at kilometre 5. There were empty cups and rather than to jostle for water, I decided to keep on going.

By some point, I told the runner I was pacing with that I needed to find my pace so I stepped it up for the next while.

I caught up to the pacer and asked him why he went out fast. He said the kilometre sign was off so he'd gone fast. I ran one kilometre with him but with the other runners, we'd done a kilometre in 4:36. I really wanted to get in some kilometres at pace so I went ahead. The next five were quite good. Again, since I was running alone among other slower runners, I felt it hard to get a real sense of pace.

It was at this point that we separated from the 15K runners. Now it was lonely and I made my way beside a runner. I asked how fast he was pacing and he said 4:30 so we started running together. It was great to have a running partner. We both clearly had more fuel in the tank because I caught up to him doing 4:32s to 4:35s but once we started running, we started running strong. We gained and passed at least six runners in 5K

Running in the Beaches was very confusing. The volunteers weren't always within site and although they pointed the way, there were some winding areas without supervision. We were going at a admittedly too-fast pace. In some ways, we were pushing each other too fast. I was also trying to make up for some of those slower kilometres but I think in the long run I was actually ahead of pace. I hit the half marathon mark in 1:33:12, which is my second-fastest half marathon time (but about 1:40 slower than my PB of 1:31:32)

We hit the boardwalk area and it was pretty freaking hilarious. There were tonnes of people out for an evening stroll so we had to contend with an uneven surface, warning people we were coming up.

After we did 23K in 4:24 I said we were doing it a bit fast so we slowed. We hit the turnaround at 24K we did a few slower kilometres. I hesitated to announce the splits because I knew we spent the previous 6K going pretty fast. A few slower kilometres is not a bad idea.

We were clearly slowing. Part of it was that I needed water and was getting tired. We also weren't pushing each other any more. So after the 28K water stop, I decided I had a lot more gas so I started to pull away. Looking back, I had slowed a bit in 24K to 27K but I only needed a kilometre or two to recatch my breath. I could have gone a bit faster.

The last few kilometres were in almost complete darkness. I had rejoined the walkers from the 15K so I was blazing by people. There was a 30K runner ahead of me so I used him as a carrot and I passed him, stepping it up in the last kilometre, which I did in 4:12 pace.

I finished the race in 2:13:24, more than a 1:30 faster than planned. I'm happy with the time. Not so happy with some of the pacing. I think part of the problem was that we were hooked on to a shorter distance race so I didn't run in packs like I'm accustomed to. The water stops were too far apart and missing one was not good. The terrain (running on boardwalk) is definitely not good. We don't do that for the Scotiabank, do we? I really hope that on marathon day there will be other runners to pace with cause it's not easy to do it by yourself. On the plus side, the weather was fantastic for the summer -- warmish at first but coolish by the end. Oh yeah, and I set a PB at the 30K distance. I can't wait to do the Around the Bay next March. This is the time I will aim to match if not beat.

Great job! Won't ATB interfere with your training for Boston next year? No, you don't run on the boardwalk at Scotiabank. It's run on lakeshore up to woodbine and then returns.

I totally agree with your observations from the standpoint of the back of the pack--at times I was on my own and it was very dark and tough to know where to go. The boardwalk, which I run quite a lot, seemed much more difficult to run on in the dark. They also ran out of water on the return bike path portion. I was glad to get it done and loved the spit portion but found the last 5-8K quite tough. The weather was great as was the scenery on the spit.

Nice job of holding back... 90 secs faster than "goal" is reasonable...

Here's a bit of unsolicited advice: during your goal marathon try to "feel" MP and just go with it. If it's slower than desired, don't push it to get it to where you'd want it to be; it will only make it worse at the end. If you feel you can go a bit faster, do so, but listen to your body and adjust accordingly.

The way I like to 'race' a 'thon is to break them into five mile increments. First five will be about 10 seconds slower than MP; trying to gauge how I am feeling that day. Depending on how I feel I may slowly get to MP by 10. If I am feeling good, I'll pick it up by a few seconds, all by feel. By 15, I know whether I can sustain the pace or even have one final modest pick up. Once I hit 20, I tell myself that I just need to run for 45 minutes or so :-)

I suggest you 'race' a 5k to see where your fitness is. Do have at least a day of rest before that 'evaluation' 5k. Then use the result to give you a realistic goal time.

I can tell you that you are definitely in sub 3:10 shape. The question is: how much under????

Great work and great report! Thank you for sharing that with us!

Kenny, this performance is sweet!! You can DEFINITELY progress to sub 3:10!!! You are RIGHT on the cusp with this race. Work hard the next 4 weeks til taper. You can nail this.

Thanks guys! Fran, don't jinx me, i'm not betting on BQing this fall.

Quinto sol, I like your advice. I'm a big believer in listening to your body. I do have a 5K planned about three weeks before marathon day that i'll use as a bench mark.