A break from the training life

This morning, coming back to my place from a night out with friends, I was about to down a glass of water to rehydrate after a night of beer, I saw something only the runner in me sees. The sky was lighting up, dawn was on the cusp. It was the second day in a row that I've been out late enjoying the pre-marathon days, and I was savouring it.

I was sitting at my desk at work the other day while talking to another runner who bought my Forerunner 305 from me and I ended up telling him that the longest break i've taken from running in the past 5 years was probably three days.

Okay, I'm actually wrong. I took four days in a row off twice this past March when I got sick twice. I took a week off running in 2006 when I was in France when I got food poisoning -- ended up fitting in a few runs in Nice. And took an extended break when my girlfriend moved to DC and I was helping her with that, along with working on covering a federal election.

So the point, I guess, is that when I look back at the last four years of my training log, I see a lot more days with running than those without.

Here's 2008, a year in which I ran three marathons (one in May, one in September, one in October). 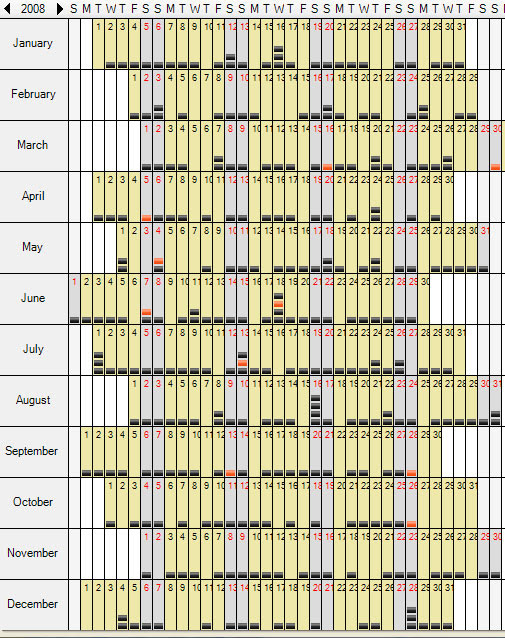 I have another two weeks of base buildup mileage before I get into heavy training. It's going to be fun to do the 18 week program, but there are many things I won't be able to do. Like staying up drinking with friends for seven hours or having a few extra pints. Sure, I do understand balance, balance that will turn five pints into two, and seven hours into four. For the next while, though, I can put running on a slight backburner.

Of course, that makes for a 6 miler a night after going out all the more painful.
Posted by yumke at 4:35 PM

Sounds like you're enjoying a little bit of freedom - my husband has been doing the same.

It's pretty cool looking at your year of runs at-a-glance like that. Not bad at all!

Enjoy the freedom while it lasts! Treat it as a reward for all the hard work... then look forward to the satisfaction of that next race :)

it is so hard to find a balance--I haven't done anything over 10K since a half marathon in November and now it seems so daunting...

What a cool chart! I would totally look at it before your next big race to remind yourself of your hard work. Just remember that rest is training, too.:)